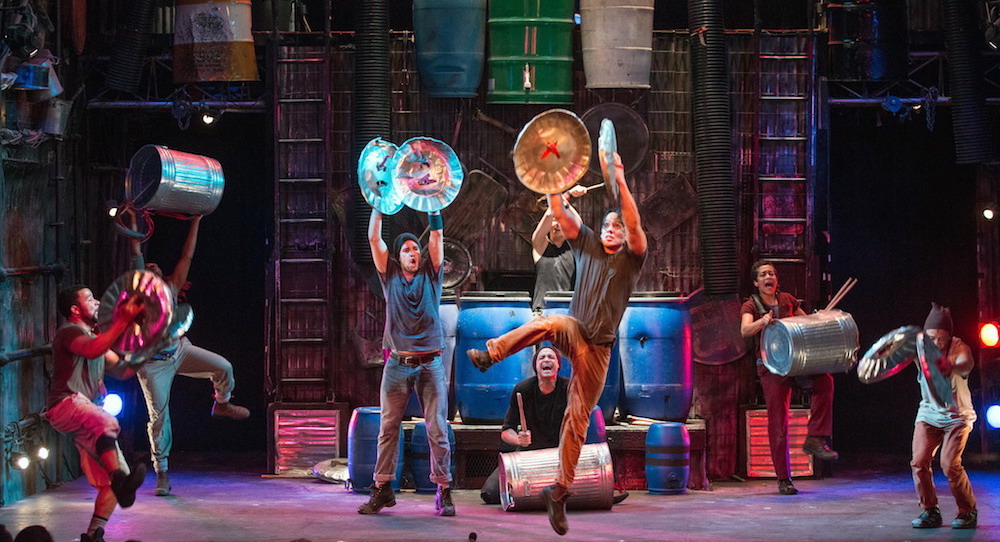 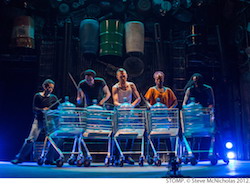 The Fox Theatre was turned into symphony of sound as STOMP took the stage Friday, April 6. The set alone had a personality of its own as it greeted audience members who attended the performance. A collage of sorts, the set was full of items we see on an everyday basis, from street signs to hubcaps to barrels. STOMP was created in Brighton, U.K., in the summer of 1991, as the result of a 10-year collaboration between its creators, Luke Cresswell and Steve McNicholas.

There was rhythm from the start of the show. With just one man on stage and a broom, he was the start of what would become a sea of rhythm made with each brush or slam of the broom. As other dancers joined in, brooms in hand, the rhythm transformed into different parts building in speed and volume. The brooms almost became tap shoes in a way, with each motion of the brooms. With each strategic slam or brush of their brooms, the dancers added tapping with the brooms, making it feel like a percussive beat of drums. 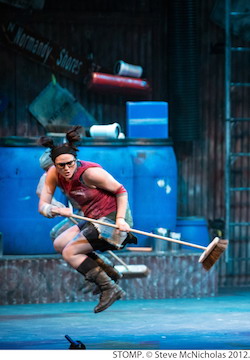 STOMP differed in many ways from any other show I have seen mainly because of the audience participation. The audience was interwoven into the production seamlessly, which made the performance like one big block party. Whether it was a clapping rhythm or stomping, we were made a part of the cast during certain moments. This made the already theatrical nature of the show even more comedic. Although there were no words being spoken, the language was clear in each yell, snap or clap. The spontaneous nature of STOMP makes you almost forget that you are in a theater.

What was even more fascinating was the intricate rhythms each dancer made, but not just with his/her feet. Dancers utilized their hands, legs and mouths, making an orchestra of never-ending sound. One piece that stood out most involved every performer and started in pitch black. We were greeted with a sliver of light from flashlights, giving the audience a glimpse of where the performers were. As an infectious drumming beat started, the lighting drastically changed against the set, which was turned into a jungle gym as the performers swung back and forth by harness. While keeping their beat intact, those same signs, pipes and pans were made into one massive drum set. Its beat became a rollercoaster of sound as the beats went from quiet to loud, but it was the perfect balance of sound and hype that engulfed the theatre. 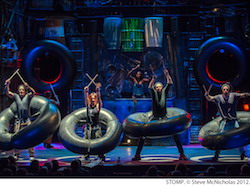 STOMP was the perfect balance of movement, percussion and visuals that make it a triple threat of performances in its own right. Each moment of the show made sure to draw in the audience and keep them anticipating what was next. STOMP created a celebration rhythm by means of the performers and audience from the start of the show up until the bows, leaving its mark on those in attendance.