While writing this review of Atlanta Ballet’s mixed repertory program, Tu Tu & More, I realized just how much I appreciate and enjoy classical technique paired alongside contemporary movement. That complimentary pairing of classical and contemporary was the theme through which the three pieces of the evening were magically intertwined. 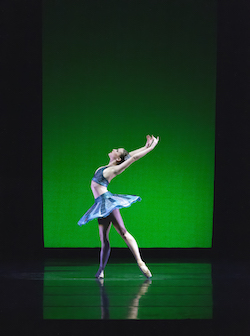 The first piece, Tu Tu, choreographed by Stanton Welch, was intriguing, quick and reflective. What I surmised from the piece was a study of a ballerina’s lifespan as a dancer, always coming back to the line of a tutu as security.

The piece opened with the stunning Erica Alvarado, perfectly partnered with Sergia Masero-Olarte, dancing in the peak of her career. A confident performance guided her through fast, challenging steps — representing a ballerina in the pentacle of her career.

We then see a more shy, insecure ballerina, played beautifully by Atlanta Ballet rising star Emily Carrico. I was impressed by Carrico’s vulnerability — representing a ballerina in the beginning of her career who has hesitation toward certain movements, not quite sure of the road ahead.

The third and final stage of a ballerina’s career was represented by Atlanta Ballet newcomer Francesca Loi’s mature performance. Loi was fluid, sure and sensual with her movement, making me believe that she has been dancing with Tu Tu partner Jacob Bush for years. With their intricate partnering, I was led to believe that her character was confident, yet relied on her partner for support, thus playing a ballerina at the end of her career.

The corps dancers of Tu Tu enhanced the beauty of the piece with exciting movement and lovely partnering. Tu Tu spoke to my inner ballerina. The piece was inviting, vulnerable and confident, and I greatly appreciated the characters the three lead female dancers portrayed. Whether or not this was the story line Welch was aiming for, I appreciated the challenging steps in this piece, especially the steps for the female dancers. Tu Tu celebrated women’s strength and accentuated the importance of technique and elongated lines with the contemporary ballet genre.

The second work of the evening was Tara Lee’s blink. The pianist of the difficult piece of music, “Variations on a Theme of Paganini, Op. 35” by Johannes Brahms, was world-renowned Di Wu. Wu played the piece with incomparable dynamics, which informed the dancer’s engaging dynamics within Lee’s choreography.

There were several entrances and exits throughout blink, rendering fleeting moments — Lee’s theme for her piece. The stars — a fleeting moment in time — something beyond our control and understanding. All of these elements were extremely well realized in Lee’s choreography, the lighting design by Joseph R. Walls, and the seven talented dancer’s execution of the piece.

Lee unveiled something in the Atlanta Ballet dancers that I’ve not yet seen this season: a movement quality that was completely their own. Made up of mostly veterans of Atlanta Ballet, the dancers complimented the music’s dynamics and quickness completely. With fluid arm movements, intricate partnering and a wonderful ending involving glitter, blink was conceptual, pleasing and a piece that I want to watch again and again.

The third and final piece of Tu Tu & More was a magnificent showcase of the true meaning of “invested” — Ohad Naharin’s Minus 16.

As a dance critic, it is hard to put in to words how you feel about a piece when you are so emotionally invested and viscerally affected by it. Minus 16 was more of an interactive experience than a work of art on the stage that felt far away. It was close. It was real.

Atlanta Ballet in Ohad Naharin’s ‘Minus 16’. Photo by Charlie McCullers.

The piece began without half the audience even aware it was beginning. Atlanta Ballet veteran and wonderful actor Jared Tan walked on stage while the house lights were still up and the curtain closed behind him. Low music began playing and he moved slowly and steady at first, clearly affected by the beat of the music. The music then escalated and he began to really move — almost gyrate. It’s one of those things that you watch and immediately smile because you know he is enjoying moving to the rhythm of the music. His movement built as the music built, and his fellow dancers joined him randomly on stage to express the beat of the music in their own way with quick, isolated movements. Stand-out dancers in this section were Miguel Angel Montoya, Keaton Leier, Jackie Nash and Zachary Alden.

When Tan and the rest of the dancers finished their riffs, the curtain closed, then briskly opened again to reveal exposed wings and seventeen suit-clad dancers standing behind a semi circle of chairs. This section of Minus 16 was perfectly executed. Repetition was the key, but it didn’t feel tired or boring. It felt changed and evolved as the choreography built on itself and repeated.

The piece then moved to shadowed, personal phrases, which felt necessary and intimate. Then, the next section — a true crowd pleaser — involved audience participation. Random audience members were brought on the stage by the dancers to participate and further the narrative. It changed the dynamic of the entire venue. Instead of sitting and watching, we were invited to be a part of the piece. It was exciting to watch and challenged the dancers to be sure of themselves and confident in their ability to improvise. The stand-out dancer in this section was the wonderful Dylan Clinard, who engaged in a rather intimate moment with his chosen audience member.

At the core of Naharin’s concept were the dancers and their commitment in each section, each movement, each moment, which the Atlanta Ballet dancers incapsulated brilliantly. Minus 16 brought out a certain vulnerability and openness about dance in general but especially about the audience. It was tangible — much more tangible then any other piece I’ve seen. Everyone is capable of letting go. Everyone can enjoy dance. Anyone can dance.