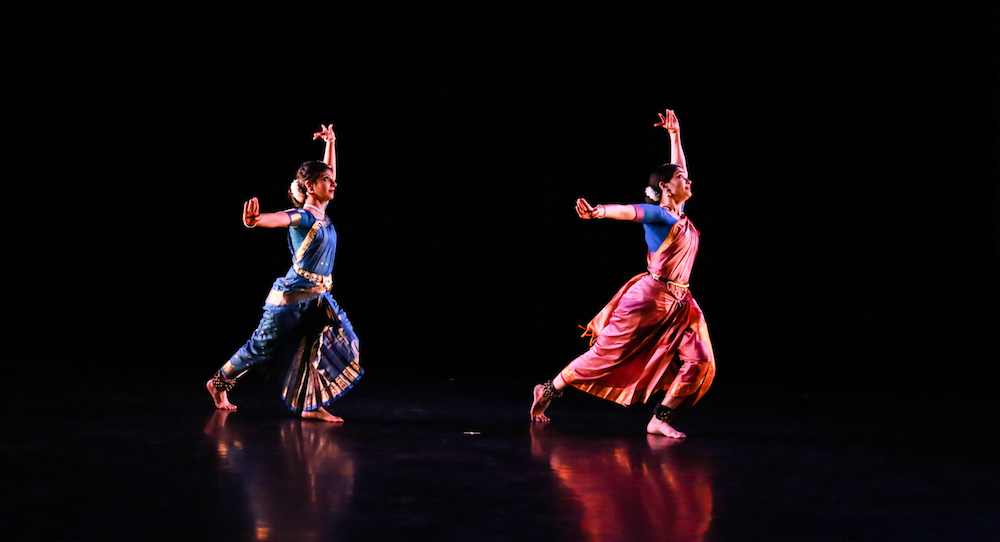 If you were to ask any random person on the street what they picture when you say “dance”, what do you think they would say in response? You might, perchance, come across a broadly educated trained dancer or dance enthusiast, but most likely this any-average-person would picture social ballroom dance, classical ballet or “dark”, “angsty” contemporary dance. Western culture, through so widely disseminating these images and ideas of what “dance” is, has narrowed the average person’s conception of the vast ocean of possibility, and established creation, that is dance.

Boston’s NACHMO was a force to fight this narrow type of vision, through offering a wide range of dance styles and qualitative takes. “NACHMO” is a crunched abbreviation for “National Choreography Month”. For this show, choreographers had to create and performance-polish their pieces within one month. All 12 pieces were notable and accomplished in their own way, yet this review will focus on the most meaningful and memorable of them. 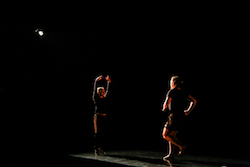 Margaret Wiss’s ‘To by Two’. Photo by Olivia Blaisdell.

The first of these pieces, “To by Two” (choreographed by Margaret Wiss and danced by Nora Buonagurio, Katy Esper), lived and breathed through an intriguing, unique frame. The only score was two dancers’ breath and speech. At downstage left, they were lit diagonally from upstage right. Simple and black costumes matched this dark, pared-down aesthetic. “Inhale, exhale” they began, with movement into and out of each other’s negative space. Their speech moved into directional words, combined with “inhale” and “exhale” – “uphale”, “acrosshale”.  In commanding tone, it felt like the directions of a choreographer – a dance rehearsal! This felt quite “meta” (art commenting on itself), and (arguably) not fully relatable to non-dancers, until one dancer began to run.

The work then seemed to morph meaning into the cyclical nature of life – directions to and fro, yet patterns such as our very breath consistent whichever way we may move. One would have to ask the artists to know if this was their intended meaning, but it is a poignant one to be found. Movement throughout was just as striking – multi-speed, multi-quality, multi-dimentional, and evidently true to the best natural inclinations of the two dancers’ bodies. The ending brought longer speech from one dancer – a unique definition of “exhale” that seemed to further that idea of the life force of cyclical breath underlying all that we do. All this meaning came from simple speech and two moving bodies! 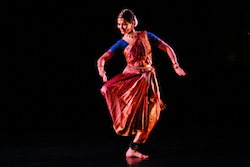 Two pieces later came a duet of traditional Bharatanatyam, “Nandi Chol” (choreographed by Shejith Krishna and danced by Revat Masilamani, Soumya Rajaram) – equally striking, yet in a different way. Authenticity came through the ornateness of costume, elegant poise and clean command of posing and transitions. This critic is not fully versed in the technique, yet it seemed as if they didn’t ever fall out of step. There was a wonderful harmony of sharpness and softness.

Audience members could also learn little tid-bits about the classical dance form and its traditional dress. We might realize the bell chimes were from bell-studded anklets, for instance. Tiny cymbals might be located at the arches of their feet. In this way, the piece was both educational and entertaining – and neither had to detract from the other. 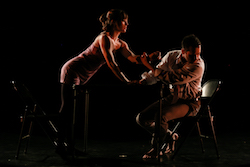 Tony Guglietti and Kristin Wagner opened the second act with “fold”. They sat at an unadorned card table. Mood-setting instrumental piano music commenced, “3 312″ by Mike Wall. A back and forth, a struggle of strength of will, began – open palms and forearms moving only to be caught in the open palms and forearms of the other. Their timing with these actions, blocking the movement of the other, was impeccable. They soon snaked around the table, on high alert, and traded seats. She moved out only to have him pin her back to the table. Then she stood up on it – strong, resilient, undefeated. She fell, in one straight line, and he caught her.

This happened a few more times – falling from her knees, curving back to bent knee – never with a hint of fear or hesitation from Wagner. With this, there was a tenderness undercutting any views of him as a villain – and even the adversarial nature of their relationship that at first seemed so obvious. It was far more complicated than that. And so love, and any close relationship, is. Wagner and Guglietti spoke to all of this with elegance and nuance, all within simple movement and structure. There was a poetic economy to it. They also offered something that become universal in its specificity. Much of the best art truly is. 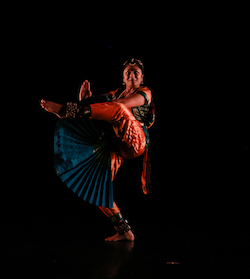 Deepa Srinath’s ‘A Padam and a Thillana’. Photo by Olivia Blaisdell.

Another Bharatanatyam piece came next, “A Padam and a Thillana” by Deepa Srinath. She began with a spoken explanation of the two basic forms of the classical dance style, storytelling and pure movement, and that she would offer a segment of each in her work. Perhaps this would have been useful before the first piece in the style, but it was helpful nonetheless. The music was also a bit more modernized than in the first piece, and her style a bit more theatrical – yet it all still seemed quite authentic. Her movement was precise yet full of ease, and her carriage regal and proud. Together with the first piece, audience members could see that there is a lot that this classical dance form can be. 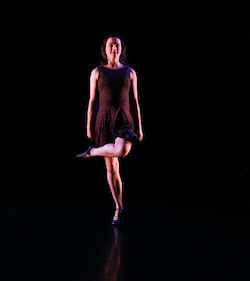 An Irish step dance piece came two dances later, “Slip Jig” by Rebecca McGowan. She infused every step with easy joy, matching that same quality in her smile. She ate up stage space, traveling on all different diagonals and lines. Looking closely, one could see intriguing and unexpected little accents – such as turning heels outward. She was precise with all of this footwork, yet still full of that joyful ease. She offered much to enjoy, whether through a close or general look at her dancing. The piece was another layer on audience members’ potential to begin seeing how much dance can be.

Next came a solo from Juliana Utz, “The Valley of the Shadow” danced by Melenie Diarbekiria – based in ballet technique, yet with a contemporary quality of release and groundedness. She wore pointe shoes, yet the lift possible from them didn’t dominate the movement nor feeling of the piece. Her long, billowy red skirt added size and dimension to her strong extensions. A ruffled, long-sleeved white shirt added classic elegance. 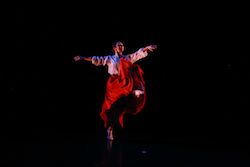 Melenie Diarbekiria’s ‘Valley of the Shadow’. Photo by Olivia Blaisdell.

A feeling of tension and conflict was also present – through multi-directional phrasework, her sharp accents (interspersed with softer movement), and dramatic delivery. We didn’t know the source of the tension, but the feeling is certainly relatable. It was another layer of what dance can be for audience members to experience.

The last piece, “Here”, choregraphed by Brenna Bannister and danced by a seven-dancer ensemble, ended the show on a note of joy, friendship and unity. It began in pairs, each member of the pair facing the other. Bright pop music, and shirts of different colors just as bright, made a rainbow of the stage. A good deal of unison movement, in jazz vocabulary peppered with contemporary flow, fit in well with this energetic vibe. Leaps floated, extensions exploded, and footwork was crisp. All of this seemed to be a modernization of jazz dance, one that seemed to stay true to the classic form – which much conversation in the dance world has been around finding. 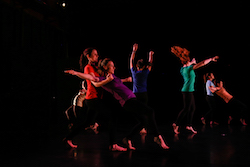 They moved out of the pairs and through other striking formations – such as laying out on each other’s spines in a circle, each offering and receiving support. They ended the piece similarly, yet in a line. An ending lyric of the song underscored this sense of support – “I’ll be here for you!”. With all it offered, the piece was but one more bright, unique stitch on the vast, multi-patterned tapestry that it is dance, in all its possibility. NACHMO Boston made this clear to every audience member – seasoned dance enthusiast, first-time viewer, and everyone in between. If they come back to the theater, what they can enjoy there is limitless!