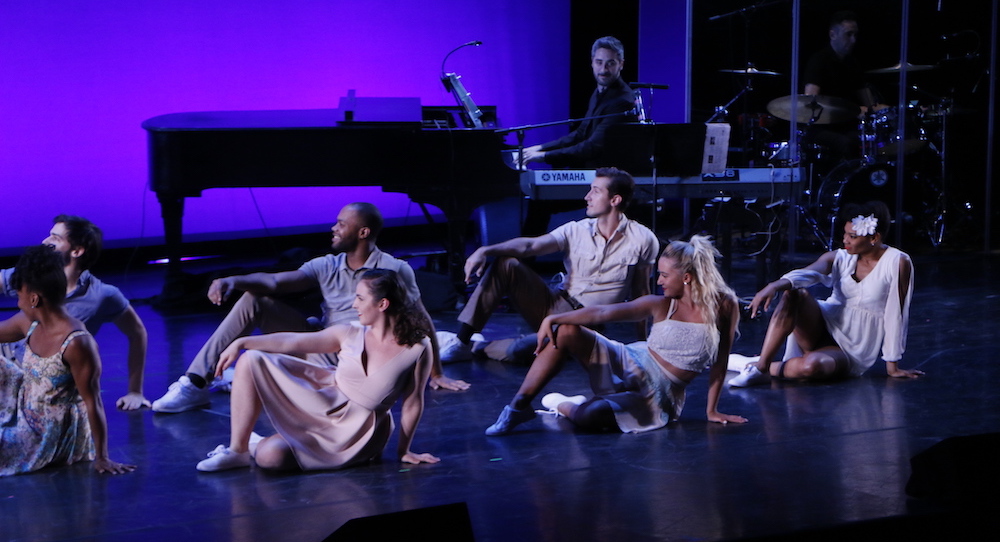 American Dance Spectacular, a revue-style production choreographed by Al Blackstone (So You Think You Can Dance, Freddie Falls in Love, The View Upstairs) and directed by Daniel C. Levine (Mamma Mia!, Jesus Christ Superstar, Chicago), takes audiences on a chronological journey through the last century of social dance trends in the United States. From the waltz, to the Charleston, to tap, Lindy Hop, disco, vogue and…twerking, Blackstone and Levine attempt to represent as much dance as possible in the two-hour timeframe. 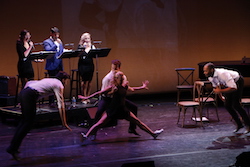 On stage were a live band, three singers (who double as pseudo-narrators to move the dance history timeline along) and seven dancers. The singers would talk us through the context (i.e. what decade we’re in, what’s happening politically or culturally, what social group “founded” this dance style). Accompanied by photo or video projections on the scrim, the dancers would then come on stage in period-esque costumes and perform a taste of whatever dance style was up. The format remained constant as we ventured through the 20th century. While the narration offered a few catchy insights (i.e. the waltz was condemned for being too risqué, dance marathons were eerily popular during the Great Depression as couples competed for days on end to win prize money, and television shows like Soul Train and American Bandstand were instrumental in bringing social dance trends into American living rooms), the book read more like an average dance history paper — giving you all the facts and figures but not really taking you anywhere. 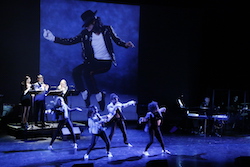 The dancing is certainly the highlight of the show (although the dancers spent much of their time off stage changing costumes while the singers worked to keep the audience engaged until the next number).  Blackstone’s choreography is lively, syncopated and informed. The movement does not always stay in the realm of the appropriate time period, but the inclusion of more contemporary techniques and transitions is almost necessary to keep the show fluid, cohesive and “spectacular.” The dancers are incredibly talented and give full-out performances in every piece (even if the style of dance is not necessarily their forte). And while the intention behind showing clips of dancing on the screen is smart (i.e. Michael Jackson’s moonwalk, flappers doing the Charleston, Soul Train footage and more), this element made the live dancing underwhelming compared to “the real thing”. (Why watch a Michael Jackson impersonation when you can just watch Michael Jackson on video?) 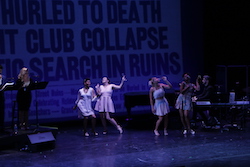 My only issue with American Dance Spectacular might seem “dance elitist” in some way. For the most part, I knew all of the dance history that was explained. And as I mentioned earlier, the format was almost scientific: now we’re at the next decade, the narrators explain the context, we see a video projection of dancing from that period, and then the dancers come out and perform similar choreography live (with a contemporary flair). Was I entertained? Yes. Was I engaged to think critically as an audience member? Not at all. I’m reminded of a phrase my high school English teacher used to drill in us: “Show me. Don’t tell me.” I would be fascinated to see American Dance Spectacular without any words (on screen, in narration or in songs). I wanted the creatives to give us a bit more credit as the audience to try and make connections and interpret the evolution of American dance history. If the dancing really is the focus of this project, then let the dancing do the work. Blackstone is a choreographic novelist; he creates character, illustrates intention and synthesizes subtext as organically as a poet might scribe a sonnet. Ironically, the storytelling structure of this show, I believe, stifled Blackstone’s ability to tell story through dance itself.

I had high hopes for American Dance Spectacular. That’s not to say that the production failed, but more that it has tremendous potential and I hope the creative team keeps experimenting with the project. What American Dance Spectacular does so well is explain the incredible history and evolution of social dance in just the past 100 years of our country. The show also highlights the current cultural infatuation with dance through shows like So You Think You Can Dance and Dancing with the Stars. But instead of telling us about the spectacle, just show us — dance it. My hopes for American Dance Spectacular are still high. And I wish that the show moves forward and evolves because the dance history of our country is nothing short of spectacular.