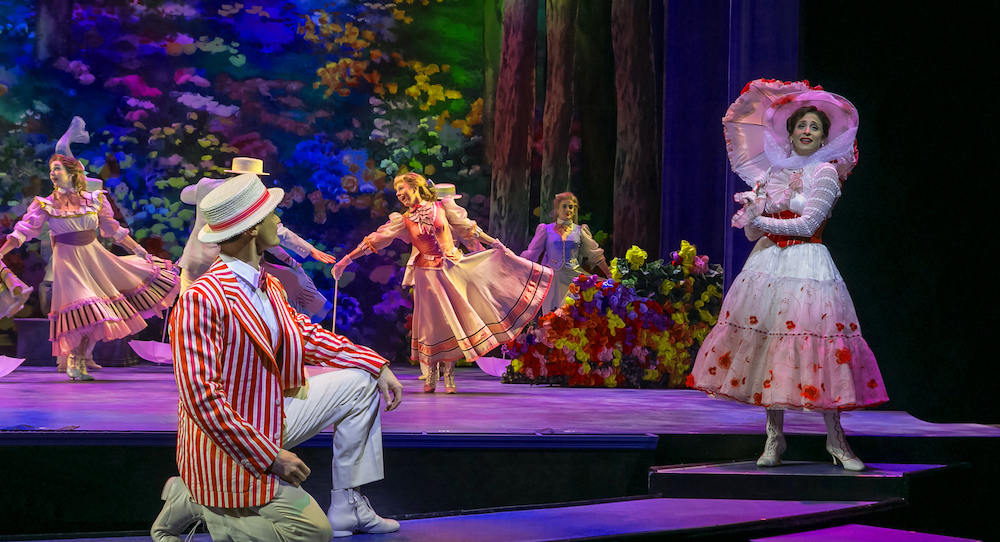 Denis Jones is one of today’s most exciting choreographers on the musical theater scene. Whether designing dances for an original work or a revival production, his aesthetic draws upon classic, old school style but adds a spark of magic — as if you’re seeing that movement vocabulary for the very first time. It’s heartening to see informed, period choreography excite and resonate with contemporary audiences. 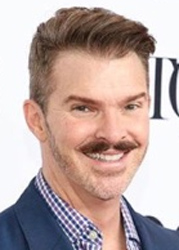 Jones, a 2017 Tony nominee for Best Choreography for his work in Holiday Inn, recently wrapped up a run of Mary Poppins, his seventh production at New Jersey’s beloved Paper Mill Playhouse. We all know and love the story of the magical nanny who saves the Banks family (by way of some pretty spectacular adventures). And Paper Mill’s production certainly did not disappoint. The audience chuckled at Michael’s adorable one-liners, teared up when Mr. Banks finally takes his children to fly a kite and gasped as Mary Poppins flew with her umbrella across the sky. But as the chimney sweeps — over 20 — took the stage and slowly stepped into a flat-back attitude while singing “Over the roof tops step in time…”, I noticed as the audience wiggled to the edge of our seats. We were about to be wow-ed. The intricate tap dancing, contagious enthusiasm, arc of the number and synchronization of the ensemble were brilliant. I’d say about 85 percent of the audience (the rest being young children who may have not seen the film) knew what to expect with “Step in Time.” But I can assure you that the number exceeded all those expectations. “Step in Time” alone was worth the price of a ticket to the show.

That’s a characteristic of a really talented choreographer — not just someone who can weave together interesting movement but one who can challenge audiences’ expectations and present a new or different viewpoint.

Amidst his busy summer, Jones was able to squeeze in a quick interview with Dance Informa to chat about Paper Mill’s Mary Poppins, his recent Tony nomination and what’s yet to come. Take a look! 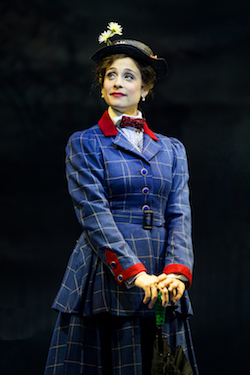 Let’s start from the beginning. What was your dance and musical theater background growing up?

“I grew up in San Francisco and was always a theater kid, but I started to take tap dance classes in third grade after seeing Gene Kelly in Singin’ in the Rain. I picked up ballet and jazz soon after, and continued to dance in San Francisco all through high school until I moved to New York and studied acting at NYU. After graduating college, I performed in a number of Broadway shows, national tours and European tours for the better part of 16 years. It was then that I wanted to get a feel for ‘the other side of the footlights’. I served as associate choreographer to Jerry Mitchell on Dirty Rotten Scoundrels and Legally Blonde. Then I kind of got the bug to try and do it on my own, so I began choreographing shows about nine years ago.”

Besides Gene Kelly, who were some of your dancer and choreographer idols?

“I think primarily it was Bob Fosse who resonated with me. The world that he creates through choreography is so smart and satisfying — entertaining with ‘showbiz’ yet illuminating a darker reality. Certainly the works of Jerome Robbins, Gower Champion and those choreographers whom I had the opportunity to work with in New York (Tommy Tune, Rob Marshall, Ann Reinking, Jerry Mitchell) inspired and informed the choreographer I am today.”

How did your experience dancing in a Broadway ensemble and as an associate choreographer affect who you are as a choreographer today?

“Having spent so much time in a dancer’s shoes — literally — helps me to communicate with the dancers I work with. That fosters a positive working environment where dancers feel appreciated for their talent and also a part of the collaborative process. It is one thing for me to wake up with ideas in my head about what choreography should be, but it’s quite another thing to set those ideas on actual human beings. So, in order for me to get those ideas out of my head and on to the stage, I need to find that on these dancers. And that journey is one that I want them to feel very included in. I would hope that my dancers feel like they have a voice and a stake in what we are working to create together.” 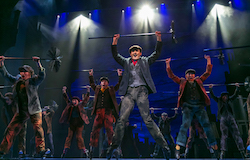 What’s your creative process like? From where do you draw inspiration, and how do you design choreography?

“I try to start with a blank slate — and alone. I always like to start with some time just by myself in a dance studio with the music. I must look like a crazy man, but I like to play the music and just start walking around the space. I find that I’m more creative when I’m actually up on my feet! The next step is to put together a small team of dancers to give life to these ideas. I believe that it’s very important to go into the rehearsal process prepared — doing a fair amount of preproduction beforehand so that the time I have with the cast is productive. But I also feel like it’s important to leave a certain amount of creative wiggle room whereby during the rehearsal process new ideas may emerge from what I’m seeing with the cast. To set the show before I even meet the company seems reckless. I would much rather prepare myself 65 percent and let the other 35 percent emerge through our time together.”

Your work — especially in Mary Poppins and recently in Holiday Inn — makes use of a lot of interesting props (chimney brooms, hand paddles, jump ropes and more).

“On a case-by-case basis, props can provide incredible opportunities for the choreography. I like the idea of dancers having relationships with inanimate objects, and making those inanimate objects dance with them. I wouldn’t consider it a ‘signature’ of mine, but choreographing props is a fun challenge.”

In ‘Supercal…’, the dancers each have two hand paddles with letters spelling out ‘supercalifragilisticexpialidocious’. Throughout the production number, the ensemble seamlessly dances to different formations and spells a slew of other words! Seriously, how did you choreograph this complex number?

“I used the script as a jumping off place. In the scene before the song, Mary Poppins asks Jane and Michael what words they see in the letters they pulled out of a bag. Jane and Michael spell a couple words, and that got me thinking, “What else can you spell with the letters of supercalifragilisticexpialidocious?” I wrote all the letters on index cards and spread them out on my floor, trying to spell words that were either part of the song or that commented on the lyrics. I just laid the note cards out on the floor and started spelling! It wasn’t until we got into the rehearsal room with the paddles, however, that the real fun started — collaborating with the dancers to see how we could spell these words and who needed to travel where and when!”

How did you bring freshness and excitement to the classic story and images audiences expect to see in Mary Poppins? 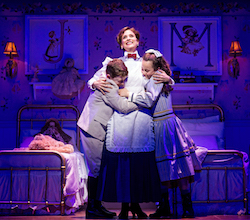 “I was a huge fan of the movie as a kid and saw the original Broadway production several years ago.  However, I made a point of not going back to either version in any research for this particular project. It was easier for me to just approach it through the script and the score. I want to make sure people’s expectations are met (i.e. Mary Poppins flies, the black-and-white park turns Technicolor, et cetera) but then with some additional surprises. It is helpful for me to not do certain research because it can be easy to become wed to someone else’s ideas.”

Do you prefer choreographing new works or revivals?

“Right now, I’m pretty much splitting my time between revivals and new works. They’re both exciting and offer different challenges as a choreographer. In a few weeks, I’ll be heading off to The MUNY in St. Louis to direct and choreograph a production of A Chorus Line. The challenge of re-approaching and rediscovering this particular show in a new way is an awesome challenge and also a celebration, I hope, of Michael Bennett’s original production.”

You’ve worked at Paper Mill a number of times. What makes it such a wonderful theater?

“I love working at Paper Mill Playhouse because they really deliver a Broadway-caliber product. The theater’s technical capabilities, the staff and creatives (especially our Mary Poppins director, Mark Hoebee) and the quality of talent and entertainment at Paper Mill are exceptional.” 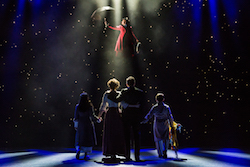 And lastly we have to ask, how does it feel to have been a 2017 Tony nominee for Best Choreography for Holiday Inn?

“It was amazing! Particularly for a show with a limited run (closed in January), and amidst a season that was so dense with new shows on Broadway, to be remembered and acknowledged meant the absolute world to me.”

Visit www.papermill.org for ticket information for Paper Mill’s 2017-2018 season, and keep on the look out for exciting upcoming projects by Denis Jones.