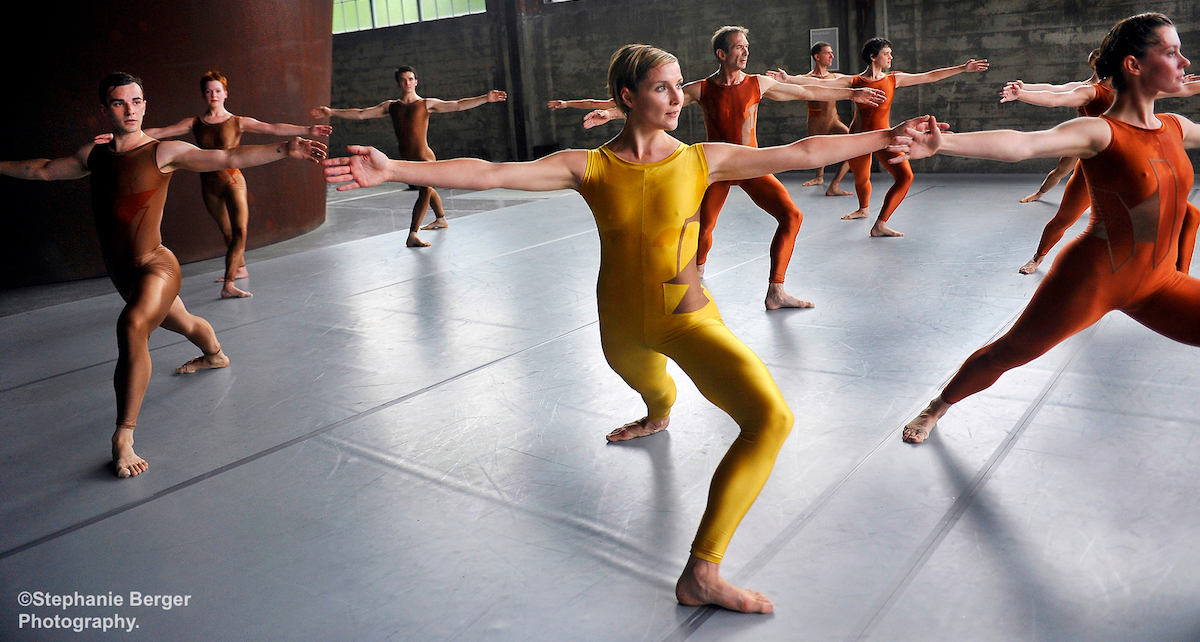 A neatly fitted box encases celebrated photographer Stephanie Berger’s new book, Merce Cunningham: Beyond the Perfect Stage (Damiani, 2016). To get to the book itself, the reader first opens the box’s four flaps — up, down, right, left — reminiscent of the opening exercises of a Cunningham technique class. As each flap turns over, you see the dancers jump, stretch, balance and partner each other in black-and-white photos printed on variously colored card stock — red, blue, yellow, orange.

Like a little “happening”, this participatory event signals the beginning of a journey through Berger’s intensely personal, carefully honed depictions of the last performances of the choreographer’s work. The book starts with Cunningham’s two-year Dia Art Foundation project, with site-specific Events created for the organization’s Riggio Galleries at Dia:Beacon, north of New York City. The project began in 2007, when the choreographer was 88. In the Events, some of hundreds Cunningham created during his career, he extends the scope of his experimentations by taking dance off the proscenium stage.

Berger’s photographs offer shifting perspectives that mirror Cunningham’s own. She accomplished this by getting close to the dancers as they moved and by taking advantage of the galleries’ varied sightlines and changing natural light. The book’s pacing has a related elasticity, as languid, athletic, quiet and stirring moments succeed each other.

“We wanted the book to feel like a performance,” says Berger of working with designer Yolanda Cuomo. 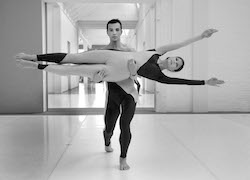 Merce Cunningham’s site-specific Events, created during 2007 and 2008 at Dia:Beacon. Photo by Stephanie Berger.

Over 25 years, Berger has photographed not just Cunningham and his company but numerous other major groups, including Bill T. Jones/Arnie Zane Dance Company, Mark Morris Dance Group and Trisha Brown Dance Company. She has been the staff photographer for the Lincoln Center Festival since its inception in 1996, and works regularly for PBS, shooting hosts and casts for programs ranging from Downton Abbey to PBS Arts Festival.

In the book, the Dia:Beacon images are followed by several Berger shot at the Cunningham company’s 2011 farewell performances at the Park Avenue Armory, in New York City. Panoramic double-page photographs cover their pages from edge to edge, giving a sense of the vastness of both the space and the glory of Cunningham’s achievement. The last image of this series is smaller and isolated on the page, surrounded by white space, as though the company and the work are receding into memory.

The final image of the book is wrenchingly emotional — taken by Berger of a film installation by British filmmaker Tacita Dean at Dia:Beacon in 2008. In the movie, the choreographer is in a wheelchair, performing six takes of his dance, Stillness, to the accompaniment of a musical work, 4’33”, by his late partner, John Cage. In 4’33”, a musician sits with his or her instrument but does not play it for exactly that amount of time. Just as the music directs the listeners’ attention to unintended ambient noises, such as street sounds, Cunningham’s stillness is filled with unintended motions, such as twitches and trembling.

The making of the films was the one of the last times Cunningham was recorded as a performer. Berger’s Merce Cunningham: Beyond the Perfect Stage is a wonderful celebration of the choreographer’s legendary life and work.

Stephanie Berger’s Merce Cunningham: Beyond the Perfect Stage could be a great holiday gift and is available in bookstores and on Amazon.com.