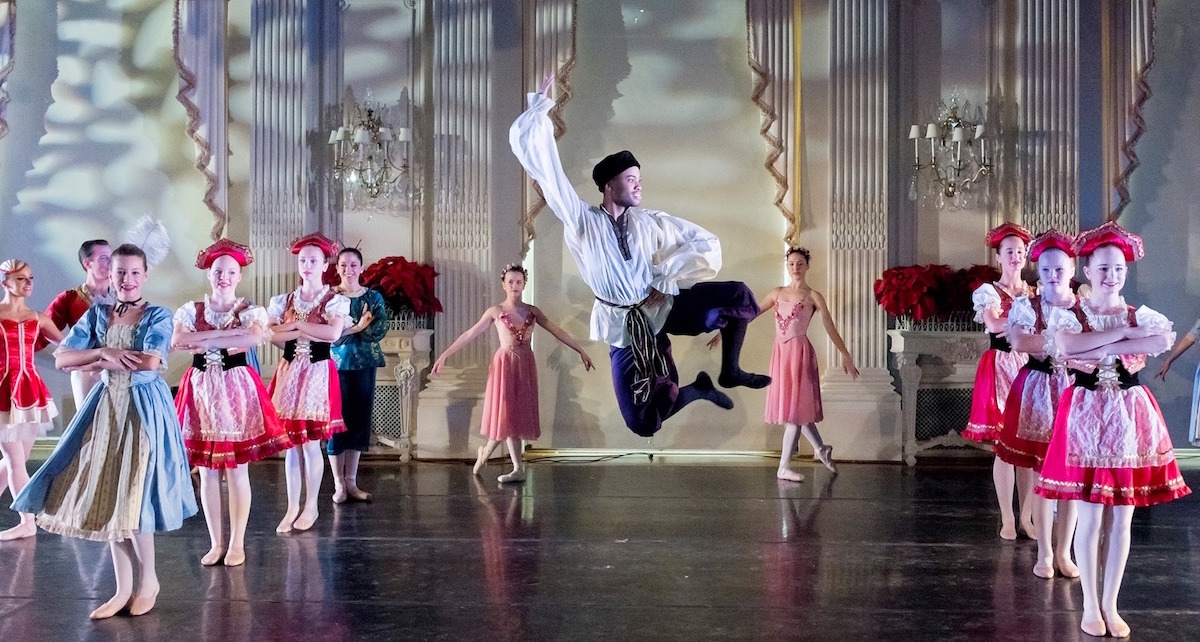 Dance began as an art form representing the culture from which it came. Even in the beginning of classical ballet’s codification in Louis XIV’s court, it intertwined with the values and social nuances of court life. The world around us is drastically different from the one of ballet’s origins. In order for ballet to thrive in 2016 and beyond, particularly when it offers traditional story ballets, it must put forth ways to remain relevant to the world surrounding it. Island Moving Company (IMC)’s The Nutcracker at Rosecliff Mansion achieved that through community involvement and effective use of artistic license.

This matinee of the show was also attended by second and third grade school children. A docent of Rosecliff Mansion summarized the history of the site in age-appropriate language. He informed the children that the mansion held the largest private ballroom in the city, for instance. The Preservation Society of Newport County, a trusted local community partner, owns the property. This educational opportunity, as well as the use of the site for the show, presumably occurred through a harmonious partnership between IMC and the Preservation Society. It is one action among many that also makes IMC a key local community player. Miki Ohlsen, IMC artistic director, introduced the children to the Nutcracker story after the docent addressed them.

The first act keenly used the site to enhance both the dancing and narrative of the performance. The battle scene, for example, took place on a steep and elegant staircase. Mice and shoulders danced through intriguing formations in this space, such as moving up and down stairs on diagonals – with lines moving to and from each other. Key figures, such as the Nutcracker (come to life) and the Snow Queen, made their grand entrances on the top of the staircase.

The story then moved into that grand ballroom the docent had described (meaning that the children “ooh”ed and “aaah”ed as their teachers shuffled them in). Ohlsen once again addressed the children, this time about theater etiquette. Before the second act commenced, she also asked a few children to come up and learn a bit of the dancing they were about to see. A few IMC dancers accompanied those volunteers as Ohlsen taught them two (short and simple) variations. These are the acts of audience and community engagement that give rise to life-long lovers and supporters of dance. 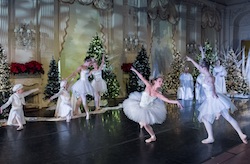 Island Moving Company in ‘The Nutcracker at Rosecliff’. Photo courtesy of IMC.

Off we were to The Land of the Sweets. The company seemed skilled at using what they have and doing what they do best, rather than striving for flash and perfection. For instance, costuming could be simple, yet gorgeous and complementary to the choreography – such as the Sugar Plums’ empire dresses (versus tutus). Ohlsen later shared that the company has one costumer, who fits, makes, cleans and repairs all costumes.

Similarly, the dancers all offered their unique movement styles and special skills. They could fall short of technical mastery but didn’t let that stop them from taking risks and giving it their all. Candy Cane Brooke DiFrancesco, for example, had a soft, light, and lovely épaulement. It might be compelling to see her apply more weight, grounding and strength to her movement. The Sugar Plum Fairy, Katie Moorhead, had on-a-dime precision in her footwork. Lengthening and sustainment through use of breath, however, could add more nuance to her dancing. All of that being said, it is pleasing to see dance artists not trying to dance like anyone but themselves.

Even while utilizing its strengths and keeping with what they do best, the company applied several creative and innovative twists. The Arabian variation, for instance, was a solo from Christine Sandorfi – whereas the variation is most often a pas de deux. She danced with hand-held, long and wide streamers. She was skilled at dancing with these props, such that they created shapes around her like cylinders and cones.

As another intriguing choice, the Polichinelles entered their variation with joyful and communal claps every few counts. Percussive elements are not often seen in classical ballet. In this case, using one had an engaging, compelling, and just plain fun effect. Also interesting to see was Clara dancing in these Act II variations more than is common. It helped keep her more present as a character, and keep the story more seamlessly connected.

After ending bows, Ohlsen once again spoke with the children. She then opened up a Q-and-A for them. One commented that it wasn’t quite like a Nutcracker show she had seen before. Ohlsen explained the idea of creative license. As described, IMC used that component of dance making well. The children also learned that one company dancer, Azamat Ansangal Uulu, is from Kyrgyzstan. Glen Lewis, who danced the Russian variation, is African-American. This is commendable diversity for a relatively small ballet company. This is yet one other way that IMC truly reaches out to beyond its walls, engaging local communities to make them a part of the world of dance.

Classical ballet is a beautiful art form with a beautiful tradition and history. But it must waltz, turn and leap along with cultural and social shifts of the communities in which it resides. With that, our society will be able to treasure the magic of dance traditions like The Nutcracker for many years to come. With performances like IMC’s The Nutcracker at Rosecliff, and the company’s associated community engagement, that can happen. Happy dancing, and happy holidays!