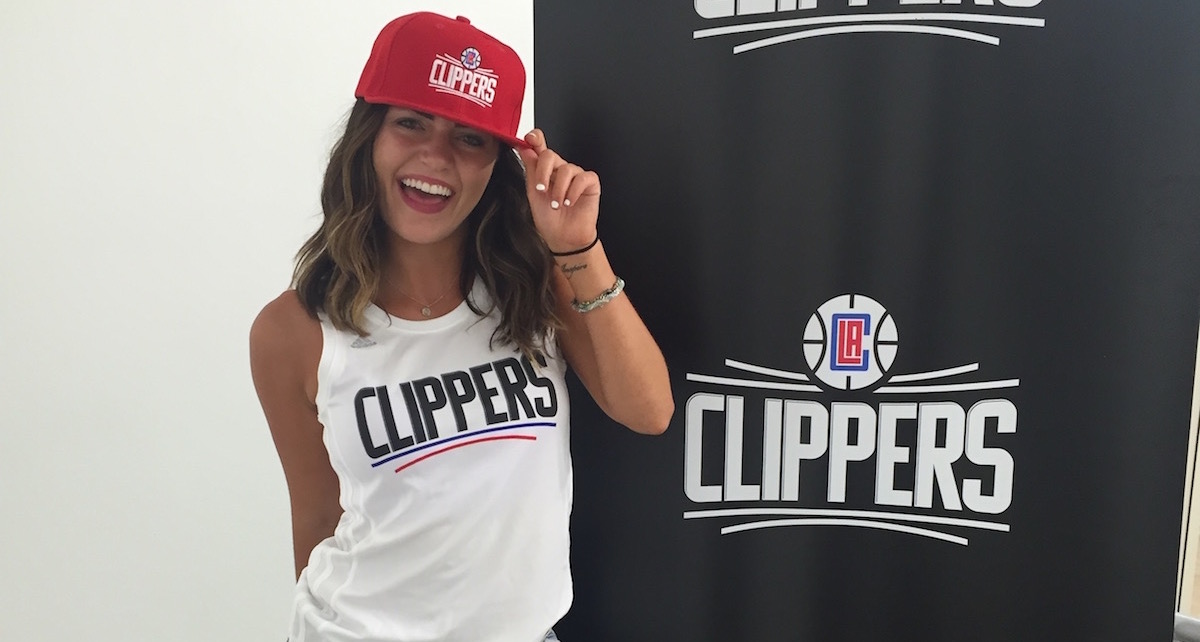 Last year, E! premiered a reality show called L.A. Clippers Dance Squad. The series followed the auditions, rehearsals, performances and behind-the-scenes drama of the Los Angeles Clippers Spirit Dance Team. With similar shows like CMT’s Dallas Cowboys Cheerleaders: Making the Team and VH1’s scripted series Hit the Floor, America can’t seem to get enough of the glitz and glamour and also the blood, sweat, tears and drama that go along with performing on a professional dance team. But don’t believe everything you see on TV. Dance Informa got the real reality — an inside interview with rookie Clippers Spirit dancer, Tori Simeone. An east coast native who recently made the cross-country move from the Big Apple to the City of Angels, Simeone speaks candidly about the audition process, life on and off the court, and the dance scene in LA. 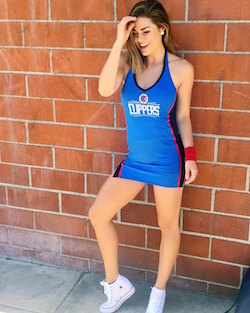 You recently made the move to Los Angeles from New York City. How did this decision come about? What are the differences between the two cities, both in terms of lifestyle and the dance scene?

“I chose to make the move across the country because it is something I have been talking about doing for as long as I could remember. I used to say back in high school that I was going to end up being a dancer in Los Angeles. After finishing my first professional theater production (West Side Story at the John W. Engeman Theater on Long Island), I saw a posting for West Side Story auditions being held in California for a theater in Long Beach. Something in my gut told me to fly out and audition for this. I had fallen in love with West Side Story and, like I said, I had always wanted to be in California, so I figured it was worth a shot. And if nothing else, it was an escape from the cold New York winter! I wound up booking the show, and after our two-month run, I decided California was the place for me.

The difference between the two cities in lifestyle and dance is that everyone is much more laid back, and things move much more slowly than they do in New York. In New York, you are considered late even if you were 15 minutes early. That is not the case on the west coast! People show up right on time.”

Why did you decide to go out for the Clippers Dance Team?

“Since I was a kid, my best girlfriends from dance and I would attend the Knicks City Dancer workshop intensives and make up our own routines in the backyard. We wanted to grow up to be a KCD so badly. While in New York, the timing just was never right for me to be a part of one of their dance teams, but once I made the move to California, it seemed like the universe almost placed the Clippers Spirit opportunity in my lap. It was something I hadn’t really considered, but once I got it in my brain that I was going to audition, I did my research on the team and decided this was exactly what I wanted.”

What was the audition like? How did you prepare for it? 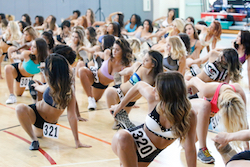 “The audition started out with over 300 girls. There are only 20 spots on the team. They took back 12 veterans and took on eight rookies. Like I said, I had always wanted to be on an NBA team in New York, but timing just never worked out. I sat down one day in the beginning of June and caught the end of the Clippers Spirit TV show on E!. I wound up looking at their social media and saw that their auditions were at the end of the month and the workshop intensive was that coming week. I signed up right away. We learned a full combination at the intensive and then auditioned it for the coach and captains to get feedback on what to work on for the audition. The audition was a two-day process full of dancing and interviewing. At the end of the second day, the judges deliberated and announced who had made the team.”

What is the commitment like in terms of performing at games, doing photo ops and attending events?

“We have rehearsals two to three times per week starting in August. We learned about 12 dances just in the first month that we had to have memorized and perfected pretty immediately. So outside of rehearsals, we are all spending time on our own to work on the routines. Once the season starts, we have about two to three home games a week, along with our scheduled rehearsals. On top of this, girls will be picked to appear at all different types of press events throughout the week. These consist of charity events, meet and greets, or extra performances.”

What is it like to be part of the team?

“Being a part of this team is so great. The coach (Latrice Gregory), director (Petra Pope) and girls on the team are so much fun to work with. It is extremely hard work that pushes you to your limits, but that first time getting to perform on the court makes it all worth it! We get to work with some pretty incredible choreographers including Jon Rua, Kevin Maher and Sheryl Murakami. Without getting to dance with them in this setting, I’m not sure I would have the opportunity to be in front of them.”

The TV show was pretty dramatic. The auditions were cutthroat, and there was gossip and fighting amongst the squad. Is the drama real? 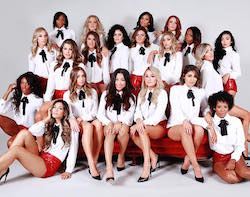 “When you put 20 girls with big personalities together in a room for long rehearsals, there’s bound to be minor tiffs or disagreements. To be honest, though, there hasn’t been much of that this season at all. We love each other like sisters. As a rookie, I feel so welcomed onto the team, and it’s really cool to see the bond that past vets have with each other. I’m inspired by everyone on the team and am pushed to be a better dancer and teammate, every rehearsal and every game.”

How is dancing as part of a team unique from other gigs you’ve done like being in a musical or back-up dancing?

“Dancing as part of a team is so different, yet there are some similarities. Both involve you working together to create a performance that people will remember. You rehearse long hours to become a unit, make sure your choreography is together and know your spacing on the court or stage.

Being in a musical is different, though, because it is much more story-driven. You are performing to literally tell/sing a story to an audience. On the court, the dances are geared more toward pure entertainment purposes. Back-up dancing is also very different because there are usually fewer dancers to work with. When I was back-up dancing for Justina Valentine in New York, there were only two of us on stage with her or in her music videos. This means there is much more focus on you as a single dancer — supporting the star — rather than creating something as a full group.”

How do you stay fit?

“I take dance classes when I have days off from rehearsal and games, making sure to keep up with my training in various styles of dance. I work with a trainer and sprinkle in other workouts when I can like SoulCycle, hot yoga or barre class. A healthy diet is a huge part of staying fit as well, so I (try) to stick to a pretty strict diet. Proteins, veggies and greens are my best friends, and the majority of what I eat is cooked at home.”

What’s the hardest part about living in LA?

“I miss my family and friends back at home so much! Being from Long Island made it pretty easy to live in the city. Even if I didn’t actually go home, I still had the option to hop on the train and be there. Out here is a completely new world for me.”

What are your goals? Do you plan on staying in LA? 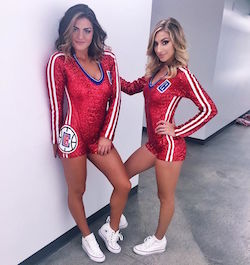 “I would love go do a second season with the Clippers and continue auditioning and working out here in the LA dance scene for a while. I love being so close to the beach, and I’m not sure I’m ready for a cold New York winter anytime soon!

Personally, though, I feel the most fulfilled when I am dancing on stage. If I could perform for an artist on a tour that would be a huge goal achieved for me. Last year, I really caught the theater bug, though, when I was performing in West Side Story. I love the type of dancing that comes with most musical theater shows and the people I meet doing it. I plan on making my way back to New York eventually and to continue pursuing theater. The West Side Story international tour is one of my main goals right now. That would be a dream come true!”

Other fun facts about Tori Simeone:

Little-known fact: “Not many people know this, but I am a certified Holistic Health Coach. Having this knowledge helps me take care of my body and mind during each show, performance and rehearsal period I am in.”

Must-go dance class: “A girl on my team introduced me to a new studio called the Kinjaz Dojo. I love the classes there! I like to keep up with ballet as best as I can with my busy Clippers Spirit schedule. Normally, I am in Damien Diaz’s ballet class at The Edge on Tuesdays and Thursdays.”

Favorite restaurant: “Right now, I am loving The Butcher’s Daughter, Gracias Madre and Gjelina. (My NYC go-to for a sweat treat is Baby Cakes.)”

What’s on her iTunes: “Literally everything. My playlist starts with the Hamilton soundtrack, followed by some ratchet rap, and I even it out with Ben Howard and Lana Del Rey.”

What she misses most about NYC: “I never thought I would say this…but I miss the subway! Well, I really just miss the ease of getting around town. For the most part, I love having my car to drive in LA, but there are times I just wish I could just hop on the subway to get where I need to go! The nightlife is also extremely different out here. Not that I am a huge party animal or anything, but it is weird not having the bustle of the city at all hours.”

Her ideal day off: “A day at the beach adventuring to new areas with my girlfriends. There are so many beautiful places to see out here, and every beach is slightly different. It makes my days off so relaxing, and I feel like I’m getting mini vacations. A few weekends ago, a friend and I decided to drive the PCH up to San Francisco for a little getaway. It took us 12 hours because we made so many stops just to explore the beaches and towns along the way. It was beautiful and such a fun way to spend a day off from working.”