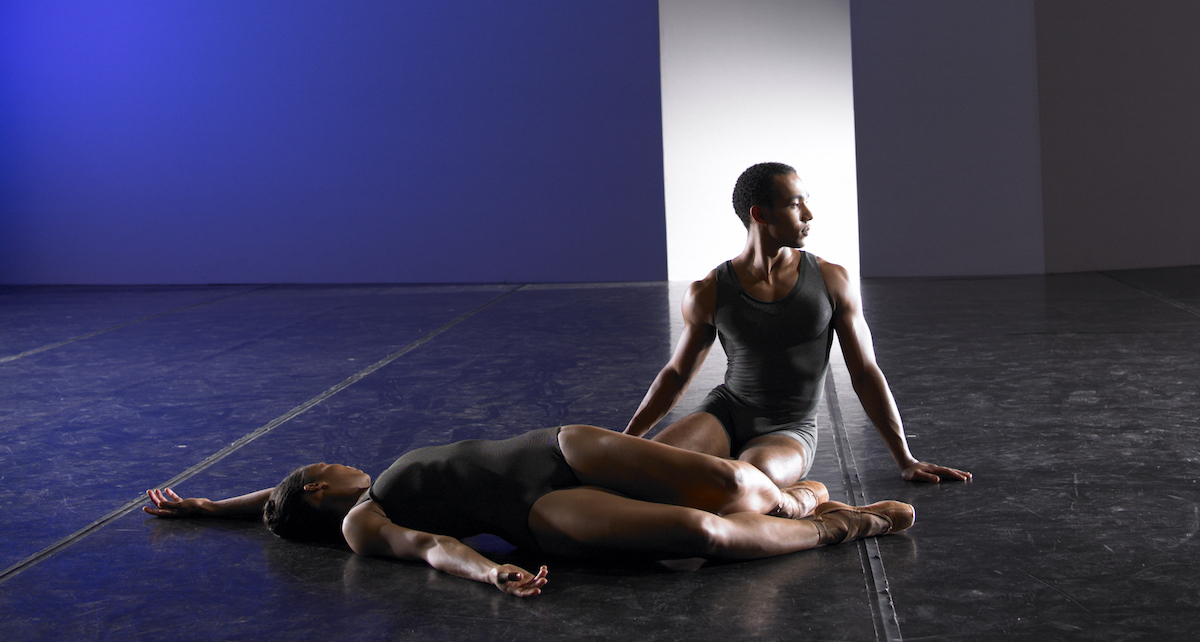 With maturity and sophistication comes knowing that less can be more. Understatement can say more than overstatement. In regards to art, implying rather than telling allows audiences to ponder their own interpretations of a work. We’re in an age when social media and television dance have performers wowing the general public with athletic feats, as well as pulling at heartstrings with dramatic stories. Massachusetts-based Jose Mateo Ballet Theatre’s program Impelling Forces, on the other hand, displayed control over flash, and mystery over obvious angst.

The first piece, Mozart Provoked, began with very classical technique, staging and performance qualities. Certain sections could have been transplanted from a ballet class during center work. A set design that was very geometric – intriguing, yet clean and simple – signaled shifts away from classicism. Those came with jazzy flairs in choreography and unexpected group formations. In initial trios and quartets, female dancers were technically flawless. Their extensions weren’t sky high but controlled and clean. Unison parts could have been more unison, however.

With all-male sections, that unison was there, but did the dancers perhaps sacrifice power and personal signature in their movement in order to achieve that? Even with either very minor shortcoming, the dancing was beautiful to watch. It seemed to support a subtext of between-the-lines emotional connections and attachments. A male-female pair explored the potentials of romance, and one dancer broke from the pack to strut her stuff.

Unexpected pedestrian movement elements (more often seen in contemporary dance), such as walking heel-toe, spoke to breaking from convention. Was this a look into dancers’ mental dialogue during technique class? Stopping short of obvious and keeping things understated allowed for such interpretations.

The dancers displayed more personality and character in the second piece, 1796 (2015). (The music was adapted in 2015 from a 1796 Mozart composition.) Although slightly more clear, the underlying story still wasn’t dictated. Intriguing formations, such as two female dancers together upstage and one male dancer each right-downstage and left-upstage, created spatial tension. It spoke to shifts in relationships between them. Dancing with control and grace, they didn’t have to do an unthinkable number of turns to convey these things. As a matter of fact, such flash could have just been a distraction.

Costuming also had that effectively discreet quality. Female dancers were in various shades of pink/purple (magenta to raspberry), for instance. That solidified them as individuals part of a collective. Their unique movement signatures supported the former – one with a very proud chest carriage and another with a unique energy in footwork, for instance.

The different colors also helped to distinguish them as specific characters – helpful for when a love triangle grew. Subsequent pas de deux established that after infidelity (or at least some degree of exploring its possibility), the woman in the relationship found out. And was not pleased. In the end, however, it was the man who left. This was an intriguing new way of telling an old, even trite, tale.

The third and final piece, Over and Over, moved to a Philip Glass composition. The music seemed to set the tone for rather contemporary movement, yet much of it was classical. This worked, however, with an intelligent mélange of classical, jazzy and contemporary movement vocabulary. A flexed palm upward through the other arm (that was bent at the elbow, and that hand at heart), for example, became a signature movement.

Dancers executed that same movement at various times and in their own ways. That supported an overall idea that the dancers were in a cohesive collective, yet each autonomous individuals. The piece seemed to feed off a tension between those two ways of being. Purposeful, well-executed épaulement and gaze in particular helped to keep that tension palpable. Smart staging supported those elements. One striking moment, for instance, was with two dancers walking backward on a diagonal into each other and then slowly gazing and turning to face one another. It spoke novels, far more than any sky-high leap could speak.

The piece ended as it began, with a sole dancer on stage. She executed that signature movement up to the sky, as if pleading to the heavens. That action, combined with the offerings of the piece overall, implied that we are indeed in wonderful community with fellow man – yet alone in our unique consciousness. It’s an inner force sometimes in conflict with the external forces all around us.

With understatement, wisdom and creativity, Jose Mateo Ballet Theatre portrayed both kinds of forces as impelling. We are impelled, and compelled, when we are left to discover some of the answers for ourselves – in art and in life. We then grow, and grow the communities in which we want to live.