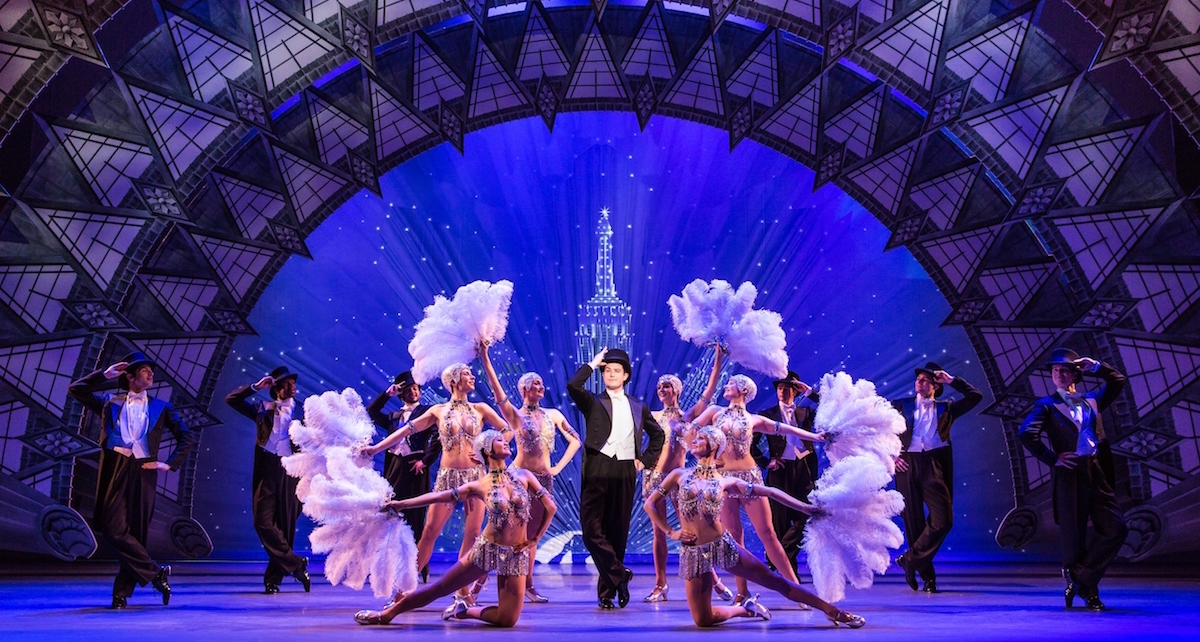 It’s felt a little crazy in America over the past year or so, to say the least. Sometimes, it seems like whoever can be the most outrageous gets the most praise. In the dance world, it sometimes seems like whoever can kick their leg behind their head is regarded as the most talented artist. The classics, however, remind us which values and achievements are truly important. An American in Paris, directed/choreographed by Christopher Wheeldon and now on national tour, demonstrates how true the above really is. Dance Informa caught the show at Boston’s Wang Theatre/Citi Performing Arts Center. 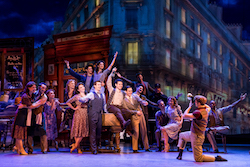 The classy simplicity of the whole show began with the pre-show tableau – a silhouette of Paris’ L’Arc de Triomphe. Other scenes of post-World War II Paris, as well as a clear yet poetic opening soliloquy, transported audience members to that time and place with adequate understanding of the back-story. That visual paring-down, with clean geometrical lines and aesthetically complementary shapes, characterized the show’s dancing as well. It filled the stage from the first group number.

It’s fairly common to keep group choreography somewhat un-embellished, so that it looks clean and sophisticated even if dancers don’t hit unison timing (when it’s intended). The chorus achieved all of that. Moments with male groups reminisced upon Jerome Robbins’ Fancy Free – power, yet smooth ease, from men in beautiful motion. At certain points, the costumes and set in earth tones and grays illustrated the hardships of post-war urban life. At the same time, the Parisians moved with a joy and an energy that evidenced the fire for life still in them – that which the horrors of war couldn’t stifle.

Jerry Mulligan (Garen Scribner) brought that simple-yet-strong quality to a new level, such that Gene Kelly (who played Mulligan in the 1951 film version) would take a second look. The group choreography, and its execution, was clean and effectively unadorned to become more than the sum of its dancer parts. Scribner dancing alone, however, delivered a chill-inducing quality. Fosse-like, a pop of his heel could fill the stage. An ex-soldier out to establish a life as an artist in Paris, he certainly made himself seen and considered.

His counterpart, Lise Dassin (Sara Esty), entered the story at a ballet audition. Slanted mirrors and the small liberty of dancers in a rainbow of pasteled ballet sweaters (which wouldn’t be allowed at many rigorous ballet schools) added visual interest to the very established look of the classical ballet. Esty also filled the stage without technical tricks, but in a different way than Scribner. She offered an extreme ease and presence in the movement, as if it were as much a part of her as her breath. At the same time, low lighting and jazz-inspired orchestration applied mystery to her. There would be much to discover about this beautiful young dancer.

These contrasting movement qualities allowed for intriguing, even spellbinding duets between the two protagonists. They danced together by Paris’ Seine River and agreed that they would meet there every day. It was evident that they were two distinct individuals who could nevertheless gracefully move together through the world. Just as natural and easy, dancing made set changes very discreet. This cross-stage, non-unison movement seemed somehow pedestrian. It was technical enough, however, to offer more visual impact (and thus distraction from set changes) than simple walking across the stage. 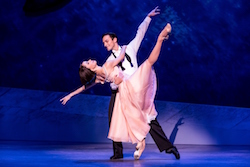 Sara Esty and Garen Scribner in ‘An American in Paris’. Photo by Matthew Murphy.

The plot heightened, and the stakes rose. A complicated love quintet surfaced questions of love, duty, obligation and self-truth. The ballet set on Lise, orchestrated by Jerry’s musician friend Adam Hochberg (Etai Benson) and designed by Jerry took the stage. Art deco design and multi-faceted choreography (from contemporary floor work to ballet extensions to jazzy footwork) created a multi-media sensory feast. As Adam had declared was his intention, it was a celebration of life – possible, and furthermore vital, in the darkest of times.

This “show-within-a-show” fulfilled the story ballet tradition of old-time Hollywood musicals. Also iconic was Jerry twirling Lise way off her feet. Circumstances aligned to allow their love to finally live. The script, choreography and other staging artfully implied this outcome. They walked off together, as if into the sunsets of old Westerns. It somehow wasn’t cheesy or predictable, but a new twist on a comfortably known story.

With dancing tricks galore on television, and the crazy dances of current national affairs, sometimes we need that familiar story. It reminds us that sometimes less is more, and values like integrity will never become antiquated. Returns to the classics help us to remember those essentially good parts of us that we may have forgotten. When it seems like things can’t get any stranger, such remembrances can be just what we need. Good belly laughs, genuine wide-jawed awe and cheers at true love’s victory also just feel plain good. No matter what this world tries to lead us to believe, those things are enough – no, they’re essential.