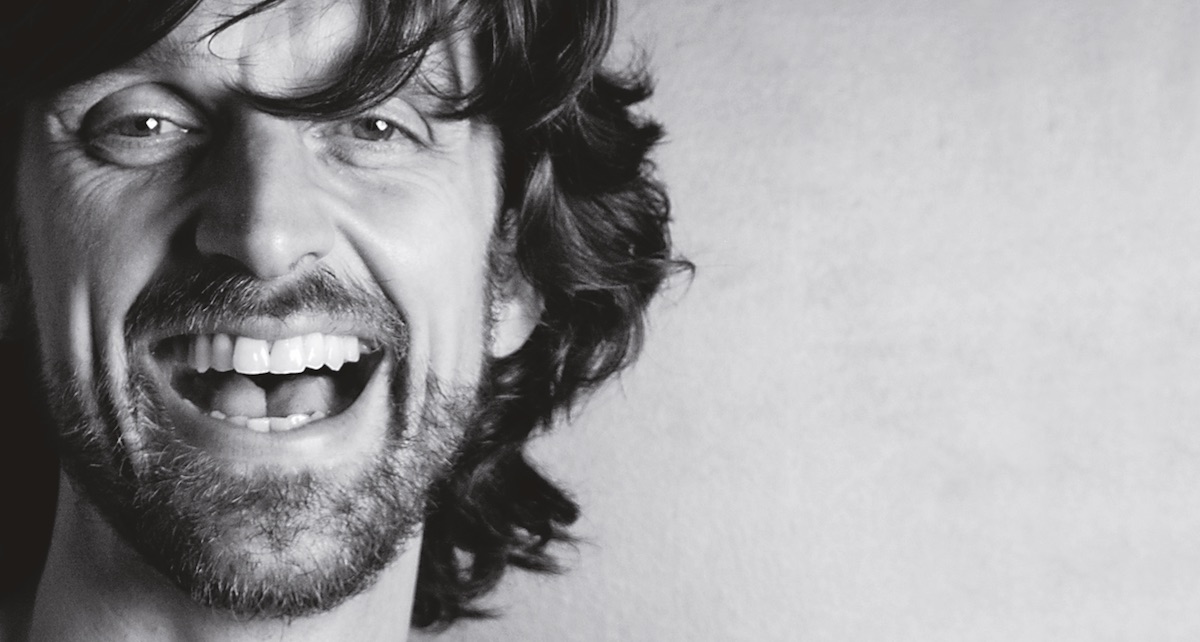 “I was a complete mess, and I was very good at falling over. I don’t know what happened, but I had sort of a gift for falling over.” And so began an artistic career spanning over 30 years, and still going strong.

In part, Paul Lightfoot may have an innate wildness, along with what renowned choreographer Jiří Kylián deemed a distinctive “English humor,” to thank for his expansive affiliation with Nederlands Dans Theater (NDT). Lightfoot was only 18 when the contemporary company spirited him away from the Royal Ballet School and what was shaping up to be a traditional trajectory in the dance world. Classically trained and dreaming of a future debut as Albrecht or Apollo, the teenager had no designs on NDT when he first caught Kylián’s eye. And yet…

“I always had this little voice in the back of my head saying, ‘You’re going to have the Hilarion complex. You’re not that — not what you think you’d want to be if you were in a classical company.’ I had creativity in me,” relates Lightfoot, who recently sat down for an interview with Dance Informa. “Creativity was big, and I think Jiří sensed that there was something there. It’s a long story, but I ended up at NDT, and the moment I walked through that door, I knew that it was what I wanted and that I had to go for it.”

After a couple of years in the second company, NDT2, Lightfoot found himself in the main troupe and, soon after, standing on the other side of his peers — along with his perpetual collaborator and future former romantic partner, Sol Léon — as a 21-year-old dancemaker. After he became NDT’s house choreographer in the latter half of the 1990s, a period also marked by the birth of his daughter (with Léon), he knew that it was the right moment for him to bow out as a dancer. And five years ago, when an invitation to take the helm of the company as artistic director came his way for the third time, he knew it was his cue to acquiesce. This is how nearly every new step in his professional life has occurred: as though scripted, but organically so.

“All the transitions — or, I should say, transformations — in my life have happened pretty naturally,” Lightfoot says. “I haven’t had to push or force any decision or any fork in the road. It was always clear to me, from the very beginning… I’m very much a stage creature. I won’t lie. I missed [the dancing] when it ended. But the choreography is always, always fulfilling. We get such a blast from giving the dancers and the audience something. And being with Sol, even in the rough time when our relationship fell apart, the work was still always there.”

As for becoming the leader of one of the world’s most sought-after dance companies, that promotion has posed no small number of challenges. Stylistically, Lightfoot is not, he maintains, the same type of artistic director as was Kylián, who is known for having changed the course of the company within the first five years of his nearly quarter-century tenure (1975-2004). Lightfoot’s unique relationship with Kylián, as both dancer/employee and choreographer/colleague, allotted him a well-rounded preview of what it might be like to preside over an organization of NDT’s ilk. It was, to some extent, this broad perspective that prevented him from snapping up the job when it first came on offer.

“Jiří was very much captain of the ship, and in a beautiful, beautiful way,” Lightfoot describes. “He was a very human person, but he was also, somehow, unreachable at times. Everyone wanted to follow his guidance. I am not that kind of person… I keep my feet on the floor, literally. I run around the building, going to different meetings, and I try to take class if I can. I’m a bit of an organized chaotic mess. I’m a Virgo, but it’s not clear on appearances. I’m the most un-Virgo person. I think when life is too rigid, too well organized, it’s almost like a lullaby. So whenever things get comfortable, I sort of shake them about a bit.”

His license to do so — as a dancer, choreographer and director — has always been somewhat contingent upon simple geography. Were NDT not based in a country like the Netherlands, Lightfoot stresses, it would not have a chance of survival. At present, the company’s annual government stipend is around six million euros, a figure that would inspire envious heart palpitations in many a North American arts administrator. Although seeking a modest level of private funding is an obligation for any state-sponsored organization, direct solicitation is not as routine in The Hague (the company’s home base) as it is in the United States. Given the troubled tenor of political and social climates around the globe today, Lightfoot regards government support for the arts as an absolute necessity, perhaps more so now than ever.

“Unfortunately, art isn’t lucrative financially. But it’s rich socially. If people would get that right and put it into the equation, they’d see that it’s worth the investment,” he says matter-of-factly. “When you’ve got the world in such a way, decisions being made in such a way, thank God there’s culture. I always think about Winston Churchill and his famous quote during World War II, when [England] was running out of money. He was told that all the funding for the arts was going to be taken away and given to the military, and he said, ‘What are we fighting for?’ I think that’s great. That was a good man. Someone who could keep perspective on society and what people’s needs are.”

An unexpected mid-interview analysis of current political affairs aside (from Brexit to the 2016 U.S. presidential election, we covered it all), Lightfoot insists that he feels no draw to make ideological statements through his choreography or the company’s programming. As far as repertory is concerned, his focus is trained on the process of creation, on the crafting of a perfectly balanced bill, and on the nurturing of artistic talent. He views the emergence of culturally relevant, modern themes in his own work with Léon to be a matter of course rather than an intention — a mindset that lends a piece like the duo’s Safe as Houses, which premiered a few months after 9/11 in 2001, an air of serendipity.

“My dad’s a builder, and there’s this joke in building: Some cowboys come around and they put keys in walls and they say, ‘Oh, they’re safe as houses.’ It means they’re good; they won’t fall down,” Lightfoot explains. “But we know that things do fall down, that environments change. That was really what the piece was about… It’s the closest to a spiritual work that we’ve ever made. Of course, when it came out, and the world was really suffering, everyone felt if must be connected [to 9/11]. It was true, but absolutely not true.”

Safe as Houses and another Lightfoot-Léon work, Stop Motion (2014), are two of four that NDT will bring to New York City Center this month. Lightfoot is nothing shy of elated to return to what he perceives as the site of a “big page-turner” in the course of the company’s history. In the late 1970s, Kylián — not yet 30 years old — met with great success when he brought his Sinffonietta and Symphony of Psalms to the theater, thus bolstering NDT’s international reputation and setting the stage for an unprecedented period of artistic prosperity. 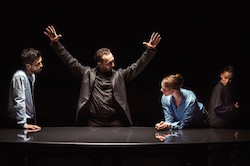 NDT in Crystal Pite’s ‘The Statement’. Photo by Rahi Rezvani.

“That was a long time ago, and it’s really beautiful to think that the company is still running on the same principles that it had then, one of which was just that dancers didn’t want to do roles that had already been done,” Lightfoot says. “They wanted to create work on themselves. They really wanted to speak through their own bodies and with different choreographic voices. That character is still there in the company, I think.”

The other two original “voices” joining those of Lightfoot and Léon on the City Center program belong to Marco Goecke and Crystal Pite, both of whom are part of what is considered NDT’s creative core. When Pite’s The Statement and Goecke’s Woke Up Blind premiered in The Hague early this year, Lightfoot was so blown away that he made the bold decision to overhaul his 2016 tour programming to include the new works — no simple task, but a rewarding one, he declares.

He speaks of these colleagues as he would family members, with no shortage of love and respect, but also with playful candor. Pite, founder and director of Vancouver’s Kidd Pivot, he says, “has this kind of Midas touch. She’s a wonderful person, a true worker. And kind. You feel there’s a real human in front of you. Yet she’s meticulous; she’s ruthless” in the studio. Goecke, resident choreographer at the Stuttgart Ballet, on the other hand, is “a real eccentric”, Lightfoot describes with a chuckle. “He comes into a room, turns all the lights off… He has a black coat and dark glasses, and he talks very low. Then he creates this monstrous quality of movement that’s so riveting. I mean, it’s hypnotic.” 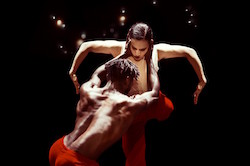 Lightfoot expresses a similar, if more fatherly, affection for his dancers — roughly 40 spread between the two companies he leads — deeming them the backbone of NDT and lauding their tireless dedication. At times, he admits again, he misses being in their shoes and the incomparable high of performing. But he is quick to affirm that he has no regrets about the course of his career.

“I think artists should be an example, in that sense,” he says. “Yes, I’m prepared to give my life to this art form. Some of my best years have gone toward these things I’m doing, toward expressing myself… Maybe there is no Heaven, maybe there is no Hell. Maybe karma isn’t real. Maybe this is it. So I’d love to get to the end and say I did something worthwhile. That’s what it’s about. Just because it’s hard doesn’t mean I’m not having a good time. This period, however long it is, is a huge gift. Feeling that, with the help of Sol and the team, I have done some good for the company… That’s really fulfilling.”

NDT will appear at New York City Center from November 16 through 19, 2016. Details and tickets can be found at www.nycitycenter.org.