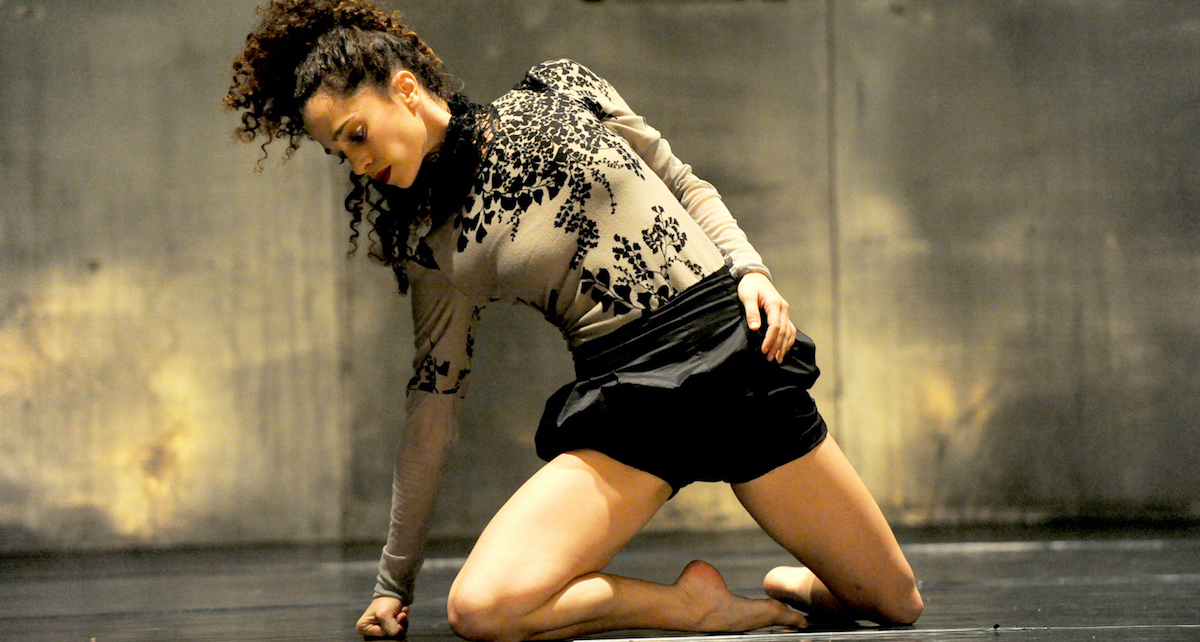 After its initial visit in 2014, Vertigo Dance Company recently returned to Atlanta from its home base in Tel Aviv, Israel, to present Vertigo 20, a co-production between the company and Fondazione Campania dei Festival-Teatro Festival Italia. Vertigo 20 arrived midway through the six-week EXPOSED Israeli Dance Festival, which was being co-hosted between the Rialto, Kennesaw State University, Emory University and CORE Dance.

The Israeli contemporary dance troupe did not disappoint with its performance of Vertigo 20, a work by co-director and choreographer Noa Wertheim that weaves together 20 years of the company’s creations. It served as a holistic, retrospective review of all the work the troupe had previously produced.

In her full-length work, Wertheim, who co-founded Vertigo 24 years ago with her partner Adi Sha’al, followed the “trail of pebbles” she had laid over the last two decades – unpacking previous choreographic works to rebuild a new one of their many pieces. 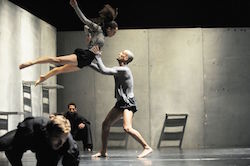 For a work that set out to celebrate a milestone anniversary, the final product is more contemplative than commemorative, though. It stitches together various solos, duets and ensemble works that are at once public and private.

Vertigo 20 opened with an enchanting female pas de deux performed by dancers Marija Slavec and Shani Licht. The two women had their hair pulled straight up into a cone shape, which was later described by Wertheim in a post-show discussion as their “birthday hat hair”. While they lean into deep lunges and melt into low grande pliés, three performers sit on the walls of the set, conceived and built by Yigal Gini.

A hypnotizing duet between Tamar Barlev and Micah Amos came next, with them pushing one another back and forth as a cluster of dancers slowly worked across the stage behind them in continuous, sustained movements – as if time had been decelerated. A tender clasp ended the duet shortly before a frenzied “fight scene” took off.

In this section, dancers flung themselves into rolls, jumps and trust falls. The stage suddenly took on a feverish pitch, with dancers moving sporadically in and out of one another’s paths. The rest of the cast – Ron Cohen, Sandor Petrovics, Etai Peri, Daniel Costa, Nitsan Margaliot, Nitsan Moshe, Liel Fibak and Sian Olles – wove in and out of every available space. If a paintbrush had been attached to their feet, the entire stage would have been coated by the time this portion had concluded.

The second major duet of the performance saw Slavec with Petrovics. The two displayed the utmost trust and confidence in one another and truly left viewers spellbound.

Throughout the work, the lighting design by Dani Fishof was dark, with shadows often being used to great effect. One such instance is the “circle scene”, which involved all the dancers circling up with their arms around one another’s shoulders and walking slowly in a loop on relevé.

The costumes by designer Rakefet Levy featured various individualistic garments colored white, black or tan. With an air of formality, they hinted at the work’s underlying ritualistic nature.

A few other memorable moments in the work included: the “line scene” that ended with one male standing by himself in front of the others in silence; the male partner work that saw impressive twists and purposeful tumbles off each other’s bodies; and the visually-intriguing conclusion that pulled upon the birthday theme again as there were a dozen white balloons floating center stage.

Wertheim shared in her post-show talk that her work is about art, not showbiz. When reflecting on the company’s anniversary for this production, she was philosophical and sentimental. Out of this came her desire to create levels on the stage, which was visually represented by the set’s floating seats on the walls. This allowed a separation between earth and heaven – and a middle ground where dancers could linger and reflect.

Overall, the movement was quite compelling, moving between a place of playfulness that echoed a fun martial arts influence and a place of slow, sustained movement that flowed like water. If you get the opportunity to see this Israeli company in choreography by Wertheim, be sure to take it. You won’t be dissatisfied.