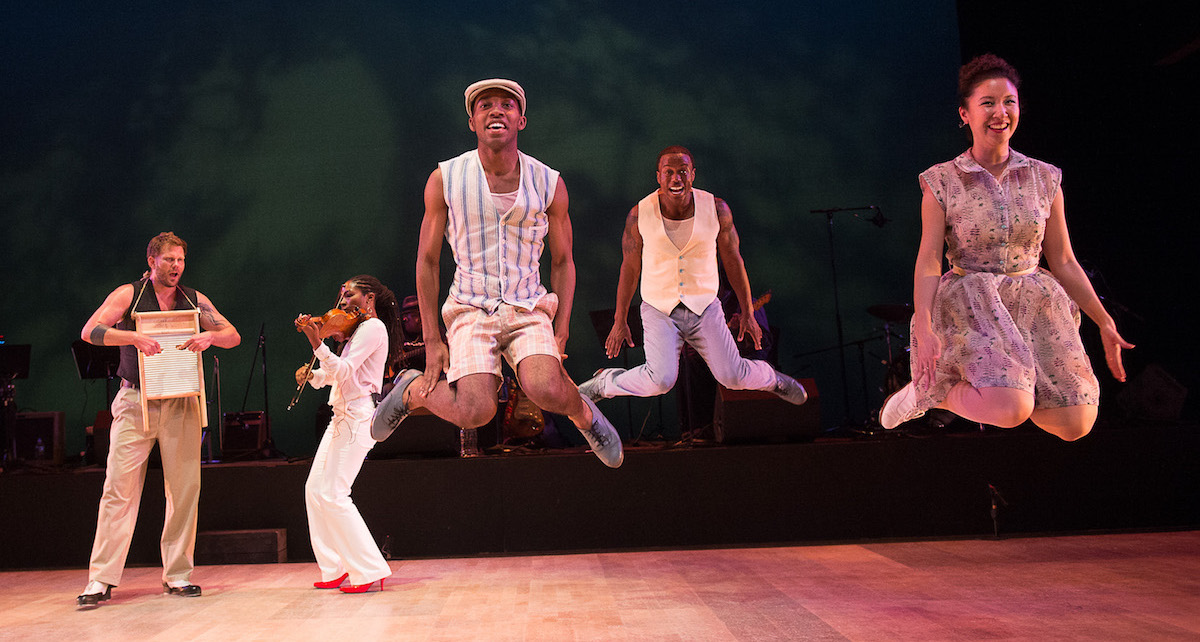 Last week, I had the joy of seeing Dorrance Dance perform its new evening-length work, The Blues Project, in the Eisenhower Theater at the John F. Kennedy Center for the Performing Arts. The program featured Artistic Director and MacArthur Fellow Michelle Dorrance, as well as a company of eight other dancers, including distinguished choreographers Derick K. Grant and Dormeshia Sumbry-Edwards. The music of Toshi Reagon, as performed by the impressive ensemble known as BIGLovely, provided a diverse soundscape for the show, evoking everything from an old-fashioned hoedown to a raucous honky tonk and a lonely moonlit night. Although the work was episodic in structure, each scene unfolded with a palpable sense of joy, even in the midst of struggle, that served as the connecting thread between dancers, musicians and audience over the course of the evening.

Staged on platforms overlooking the dancers, the four musicians of BIGLovely served not so much musical accompaniment but as conjurers who summoned up the spirit of the time and place in which the dancers inhabited. With a hazy blue light illuminating the space, the musicians seemed to speak the dancers into existence as the company of five women and four men entered creating a sound so subtle and powerful that it evoked the echo of a collective heartbeat. 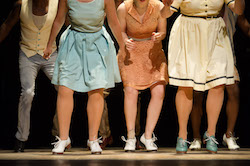 Dorrance Dance, along with Toshi Reagon and BIGLovely in ‘The Blues Project’. Photo by Christopher Duggan.

The dancers were clothed in a soft naturalistic palette of pinks, blues, white, browns and greens, with the women wearing simple cotton dresses and the men dressed in slacks, vests and button-downs. The vintage look, combined with the restraint in the sound of their footfalls and heel strikes, gave me the sense of a people who, on a journey from the past, were brought here to share their story with us. This premonition seemed to be validated as the different American dance and musical traditions explored in the program unfolded in a roughly chronological order, taking the audience on a journey from past to present. As the opening sequence evolved, the sound became more vibrant and playful with a sense of a lively conversation developing amongst the dancers and the music.

By the time all of this evolved in a not-so-old-fashioned hoedown, the audience was hooked, and it was fun to hear the crowd erupt with spontaneous exclamations, claps and sympathetic movement throughout the rest of the program. For me, this section of the show was one of the highlights of the program, and the memory kept me smiling for days after the show. It was such a delicious surprise to see classically-trained violinist Juliette Jones take the stage in sleek black heels and then break out into the kind of Bluegrass fiddling I grew up hearing in my native Kentucky. Meanwhile, two African-American dancers slipped off their tap shoes and took center stage with full-bodied articulations reminiscent of West African dance. Simultaneously, a white couple was downstage kicking up a wall of sound akin to the clogging tradition that is strong in the Bluegrass area where I raised; the comfort and familiarity of those rhythms resonated with me so deeply that it brought tears to my eyes. Given the contentious political climate in which we are currently living, there was something incredibly healing about seeing black and white bodies speaking so articulately from different but interconnected folk traditions on the same stage in the heart of our nation’s capital. The sense of unity and spirit of celebration among the dancers onstage was an encouraging glimmer of what we could be as a nation. 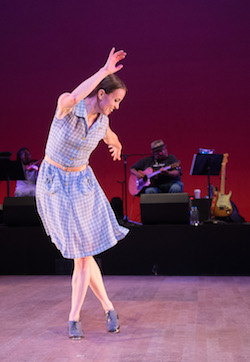 As the party atmosphere was fading, Dorrance rejoined the cast and was soon left alone in space with just the haunting vocals of Reagon to keep her company. Long, lanky and seemingly downtrodden, Dorrance’s solo cut the figure of a woman down, but not beaten, as she alternated subtle, almost timid toe taps with more frenetic sounds and flailing limbs. Something in the hunch of her shoulders and the shadows on her worn cotton dress reminded me of those black and white images of Appalachian mothers during the Depression. Dorrance grew up in Triangle area of North Carolina, so maybe those images are part of her artistic DNA the way they are part of mine, or perhaps evoking that image was unintentional. In any case, I loved the idea that one of those silent images had been given a voice, a rhythm, a call of her own through Dorrance’s sensitive and moving performance.

Soon, the rest of the company appeared again and delivered a string of incredibly entertaining performances as the program moved montage-like from one mood to the next. As an ensemble, the company moved well together, unified by the precision of their sound and seemingly boundless energy. I recall a particularly fun, high-energy bluesy number that had that juke-joint hopping, honky tonk bar, bouncing feel that made the whole room want to get up and dance. In fact, there were a few kids in the front row of the theater who were standing up and bopping along for most of the show. Another stand-out number in the show featured the ensemble in bright colored tennis shoes jumping and jiving jitterbug style to a swinging tune that made it hard to stay in your seat. I was pretty jealous of those kids dancing along at that point. 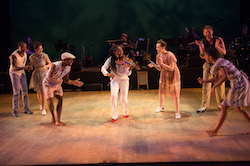 Dorrance Dance, along with Toshi Reagon and BIGLovely, in ‘The Blues Project’. Photo by Christopher Duggan.

The most memorable part of the show, however, came near the end. Dressed in a sweet white eyelet dress, tap legend Dormeshia Sumbry-Edwards commanded the stage with the power and raw emotion of a grown woman on a mission, creating a sharp contrast with her almost girlish silhouette. Her stunning performance put me in mind of that image of Elizabeth Eckford, one of the Little Rock Nine, walking into Little Rock Central High School during the 1950s Civil Rights Movement. Surrounded by angry protesters, Eckford was wearing a crisp white blouse, a gingham circle skirt and the calmly defiant expression of a young woman far too accustomed to facing hate with feigned indifference. As Reagon’s vocals kept sounding out a call for freedom, Dormeshia, too, wore a quiet, determined expression as she kept pounding out a fierce, unrelenting cadence that was punctuated by sudden stops and pointed eye contact with the audience. She seemed to be asking, “Are you hearing this? Do you get me?” And the audience was definitely with her, clapping and shouting out sympathetically. Her solo seemed to bring us to the present day, to this time when we hear far too regular reports of black men and women dying at the hands of those who are supposed to protect us. Maybe that’s not specifically what she was dancing about, but her determined call for freedom seemed pretty close to the mark for me.

Somewhat predictably, the show ended on an upbeat note with the whole company returning for one more big number that had that familiar finale feel to it. But I didn’t really mind the inevitably of the gesture. As the dancers were hoofing out the last infectious beats of the show, I marveled at the diversity of the performers on stage and savored seeing them all moving together one last time. I left the theater thinking that I might have wanted to be a tapper, and not a ballerina, when I was a little girl if I had seen women taking the stage like that when I was a young, aspiring dancer. Dorrance Dance and her impressive company are hopefully inspiring the next generation of tappers to share their stories with such clarity and power.

Photo (top): Dorrance Dance, along with Toshi Reagon and BIGLovely, in ‘The Blues Project’. Photo by Christopher Duggan.