The next in Dance Informa’s “5 Things I Want to Tell Dancers” series. Here, we receive advice from a costume designer on the creative process and staying within budget. Check back in the months ahead for guidance from other experts!

Bessie Award-winning costume designer Liz Prince may be best known for her work for the Bill T. Jones/Arnie Zane Dance Company, which she has costumed since 1990. Her full list of credits, however, is as long as your arm, or even your leg. Here are a few highlights: Doug Varone, Mark Dendy, Jane Comfort, David Dorfman, Ralph Lemon, Baryshnikov/White Oak Dance Project, Boston Ballet, Pilobolus and Trey McIntyre for American Ballet Theatre. Prince teaches costume design as well, including at Manhattanville College and the State University of New York at Purchase.

Here are her tips for a productive and inspired working relationship with your costume designer.

“The most successful collaborations with costume designers will begin with guidance from you, the choreographer,” says Prince. It could be something simple. Maybe it’s the type of fabric — light and flowing, or heavy and swinging, for example. A great way to unite all of a show’s visual elements is to determine a color palette from the start, she says.

Or not. “Houndstooth checks!” was what one choreographer wanted from Prince — along with florals and metallics. “Making it all balance took some doing,” Prince recalls, “but in the end it really worked.” 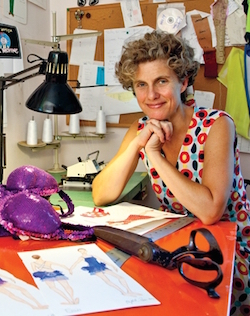 Visual images — a photograph, postcard or painting, let’s say — will be helpful for your costume designer. The item can include depictions of clothes, but it doesn’t have to, says Prince. “It can just evoke a mood or suggest a shape,” she adds. To collect material that will start a conversation, she suggests visiting art galleries and museums.

Whether a dance is finished or in progress, watching it will tell your costume designer a lot, according to Prince. If the dance has a story, the designer can use the language of clothes to build the characters. Such costumes can communicate status, gender, age, era, time of day, how the characters feel about themselves and even the weather, she says.

For an abstract dance, Prince finds that the designer needs different types of clues. The dance’s sense of space and form, the lighting, the set and more will direct the costume choices.

Encourage your costume designer to observe the dancers’ street and rehearsal clothes. “This saves both time and heartache,” says Prince. “The designer will see the garments the dancers feel best in, as well as what they want to display or cover up.”

You can also have the dancers bring lots of their own clothes to a rehearsal, while the costume designer supplies purchased low-budget clothing items. “Have the dancers try things on in a mix-and-match free-for-all,” suggests Prince. You and your designer may be able to settle on the costumes then and there.

Or perhaps you’ll see some combinations you like and have the designer create others to be sewn in a costume shop. Such shops are available in most cities. The designer may also sew the costumes, although this is not necessarily the case, according to Prince.

How you go about creating costumes will depend a great deal on your budget. Having them custom-made is almost always more expensive than buying them ready-made or assembling them from purchased items, says Prince. The price tag for custom-built costumes varies widely, depending on the complexity of the design, the cost of the fabric, the number of dancers and other factors.

Time is another critical issue. “I can’t tell you how many choreographers have called me to costume a dance a week or two before the performance,” says Prince. “Two or three months is a more realistic time frame for not just consulting and designing but obtaining swatches, shopping for the chosen fabrics, cutting, sewing and fitting.”

That said, Prince adds, costuming a dance is part of a creative process that unfolds in real time. “I have been in wonderful projects that included alterations right up to the end,” she says. “It felt like we slid into home together on opening night.”