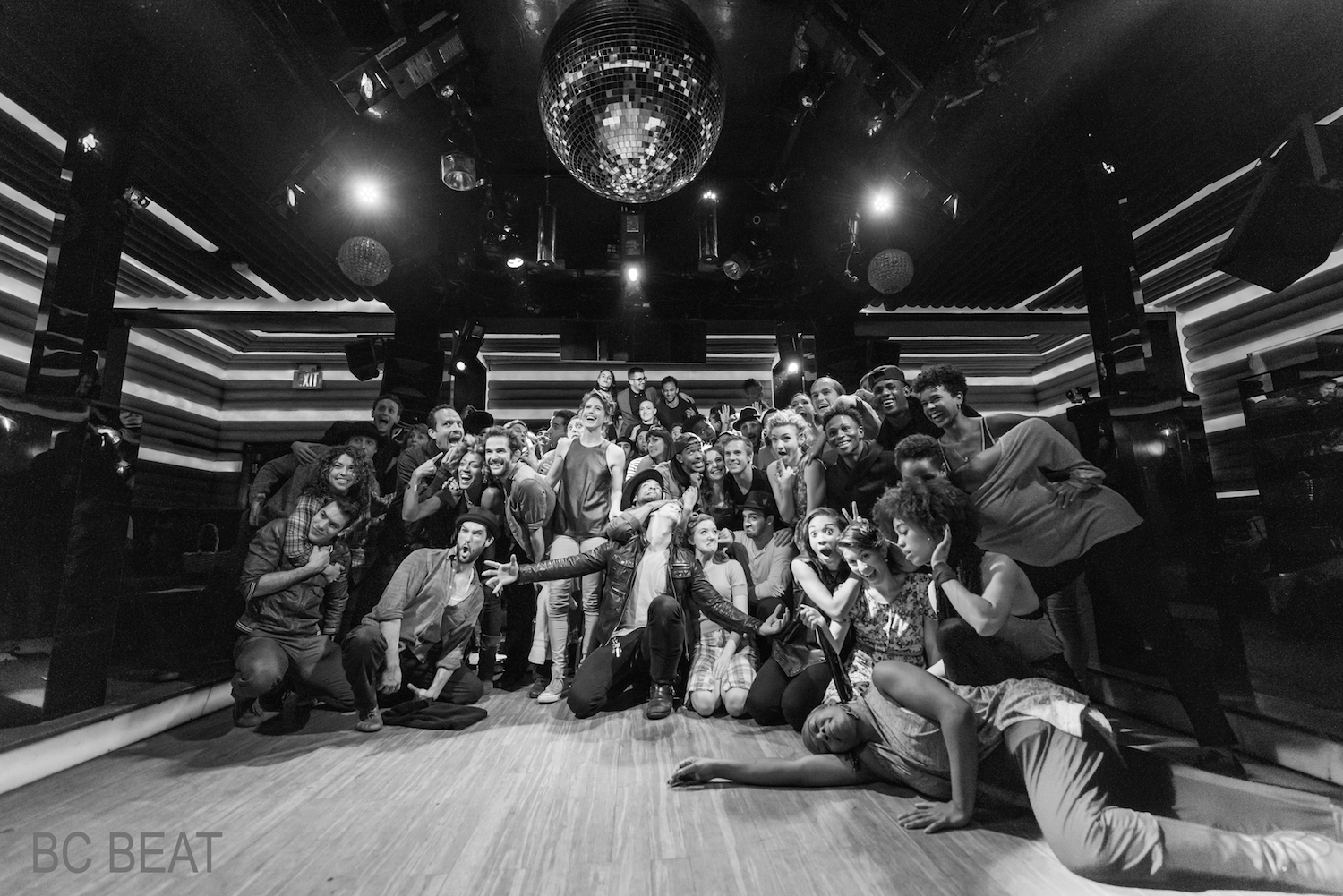 Every spring and fall season since 2011 has ushered in a one-of-a-kind event to the Meatpacking District of New York City. BC Beat, founded by musical theatre veteran Jennifer Jancuska, welcomes choreographers and dancers working on various productions across the city and on the Great White Way to collaborate on new works that will be premiered in the unique environment of Cielo, a nightclub that blends modernity with retro style.

Looking at BC Beat over the last five years, it’s clear that it has tapped into a secret truth on how to best cultivate relationships in the dance community and instigate future theatrical collaboration – many of its participants have booked gigs or gone on to produce projects based on connections and ideas that resulted from the event. In many ways, BC Beat serves as a blueprint for other choreographic labs and initiatives seeking to nurture artists.

Three choreographers who can testify to BC Beat’s influence are Patrick McCollum, Daniel J. Watts and Michael Mindlin.

Mindlin, a New York City-based performer, choreographer and director, has previously performed in Broadway’s Bring It On, Mamma Mia, 9 to 5 and Chitty Chitty Bang Bang, in addition to the 50th Anniversary USA Tour of West Side Story, Camelot (presented by NY Philharmonic and PBSʼ Live from Lincoln Center) and the Radio City Music Hall Christmas Spectacular. He’s currently on faculty at Broadway Dance Center and serving as the dance supervisor and swing for Aladdin on Broadway.

Mindlin, who has choreographed twice for BC Beat, says, “The work I have presented at BC Beat has allowed me to continue building a footing in the theater community as a choreographer and director. There have been several relationships that have grown from my involvement with BC Beat – mostly with fellow choreographers.”

Likewise, Daniel J. Watts, an accomplished spoken word artist and storyteller, has had positive outcomes from his involvement in BC Beat. While he already has an impressive list of credits — at this point, he’s appeared in eight Broadway shows, including After Midnight, In The Heights and Memphis and currently is in the critically acclaimed Hamilton: An American Musical — he says BC Beat has helped him facilitate connections in unique ways.

“I met the incredible producer, artist and entrepreneur Dani Davis at the first BC Beat,” Watts shares. “This spring, we’ve started to sit down to further develop a show that I’ve created called ‘The Jam’, which is a spoken word-based experience.” 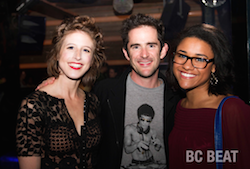 Jancuska, left, with BC Beat participants.

Southern California native Patrick McCollum has also benefited from BC Beat. Having performed in the smash hit Wicked on Broadway, in Chicago and Los Angeles, and having worked with several modern dance choreographers, including Joe Goode, Keith Johnson and Bill Young, McCollum already has a plethora of connections in the industry. But when he first got involved in BC Beat in the fall of 2011 as a performer, that network only further expanded. Now he’s created works for the event twice himself, giving him a chance to deepen his own choreographic voice, too.

Sharing how BC Beat has opened the door for new opportunities, McCollum says, “After my involvement in 2011, Steven Hoggett asked me to become his associate for Peter and the Starcatcher on Broadway. That led to a working connection with him, as well as with directors Alex Timbers and Roger Rees and writer Rick Elice. From there, I worked on the world premiere of Rocky in Hamburg, Germany, with Hoggett and Timbers. All of these connections led to other connections, and it’s allowed me to work pretty steadily for the past four years. Hoggett and I have worked on three major shows together, as well as some side projects, and Timbers has asked me to work with him on a couple Off-Broadway shows as a movement/dance consultant.”

When asked what it is that really sets BC Beat as an event apart and assists in creating that unique connection between choreographers, participants and even audience members — a connection which seems to prove influential and highly memorable — McCollum, Mindlin and Watts all point to the performance environment. 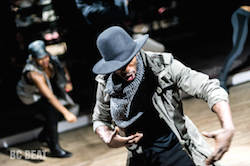 Dancer performing at BC Beat Fall 2015. Photo by Eli Fendelman.

“I am sure my opinion is shared by many,” Mindlin says. “BC Beat is incredibly unique in its ability to bring the theatrical and dance community together in a supportive environment. There is much to be said of the setting in which the event takes place. Most showcases I have worked on take place in an actual theater, where the separation of artist, performer and audience is apparent via a proscenium of some sort. And although this is incredibly valid and important for many events, the immersive setting of BC Beat, from the lowered stage, to the ‘in-the-round’ set-up, to the dance music and lighting, allows for a literal interaction of viewer and performer that gives the evening a palpable electricity.”

Watts seconds this, saying, “The 360-degree aesthetic immediately creates an environment where we are all a part of the experience. It becomes immersive. Throw in a DJ, an accessible dance floor and about 200 dancers (simply people who like to dance), and you’ve an experience like no other. It becomes a community creating a community.”

McCollum further agrees. “There used to be, and still are, choreography showcases around the city, but they always felt stuffy,” he says. “BC Beat is by the people, for the people. No auditorium seating, no backstage. You mingle with the audience while you stretch and prepare. It feels bohemian, it feels sexy, and the close proximity makes it feel slightly dangerous at times.” 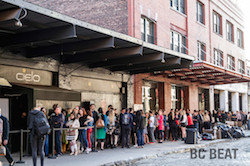 Founder Jennifer Jancuska, talking about BC Beat’s mission, says that from the beginning, the event was meant for “a vibrant, daring new generation of choreographers” and for performers and audiences to connect through their movement. It’s also about inclusivity, as evidenced by the dance party initiated at every show with audience members.

“As creative director of BC Beat, it was important to introduce the choreographers together on the dance floor and to invite everyone in attendance to join us on the dance floor during intermission and after the final piece,” Jancuska adds. “The dance floor became the new place to connect, groove and chat with choreographers and performers. It made us all one. And fostered new connections leading to unexpected and really exciting future collaborations.”

Speaking on how she personally benefited from BC Beat as a choreographer, Jancuska shares, “I am currently working with Brian Lowdermilk and Kait Kerrigan on the 2016 workshop/production of The Bad Years. Brian attended the Spring 2014 BC Beat. We had never met previously.” 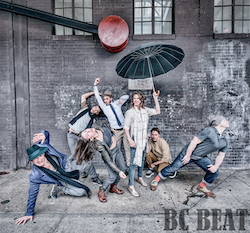 A few of the BC Beat Spring 2016 participants. Photo by Eli Fendelman.

Now, with another BC Beat upon us, only time will tell what new fruits will be born out of this engagement. The 11th edition is set for Monday, May 23. In addition to Jancuska, participating choreographers include: Lauren Adams, Grady McLeod Bowman, Richard J. Hinds, Mary Ann Lamb and Lisa Gadja, Lorin Latarro, Reed Luplau, Adam Murray, Darrell Grand Moultrie, David Norsworthy, and Sarah O’Gleby.

McCollum applauds Jancuska for creating BC Beat, saying, “Jennifer has made something more than an event; she’s made a community.”

For further information on the 11th BC Beat, scheduled for May 23, visit www.bcbeat.net.