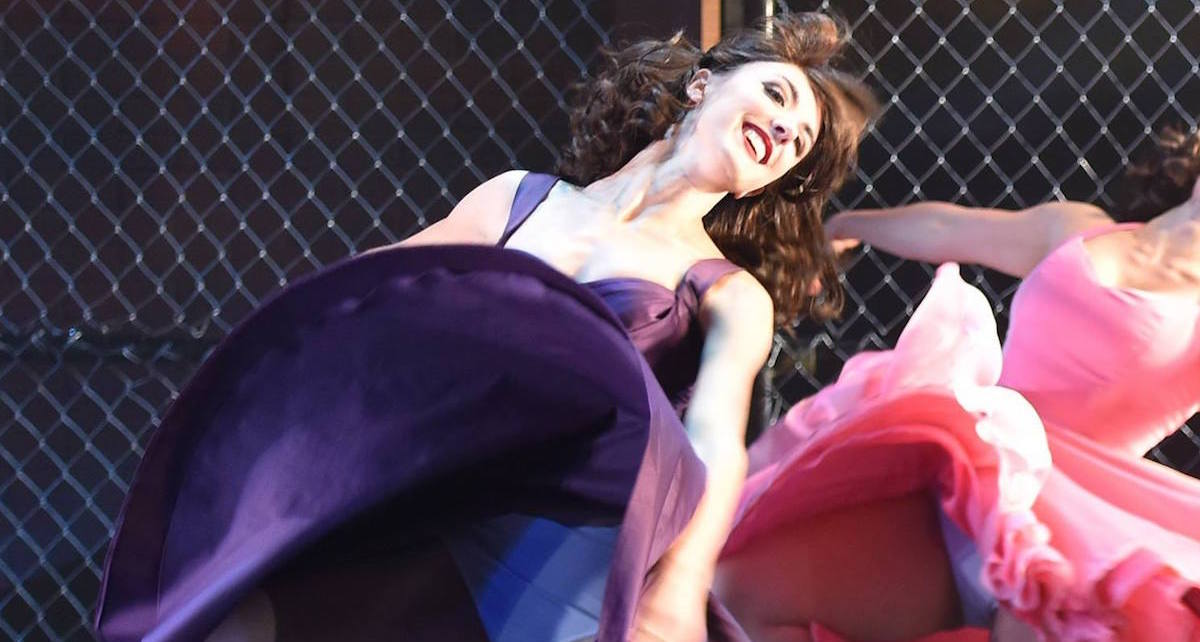 What doesn’t kill you makes you stronger, right? Well, if that’s true, then dancers are the strongest humans on Earth. We face rejection, suffer through countless injuries, sacrifice financial security and struggle with disappointment, insecurity, and self-doubt — all for the love of our craft, our vocation. Not a lot of people can say that.

And what’s more, dancers’ struggles are often silent — kept hidden from our performance on stage. But although the circumstances differ, the struggle is shared.

In early February, I suffered a pretty serious back injury and cannot dance until I am fully recovered. I’ve gone through bouts of fear, anger and depression. But I have a wonderful support group of fellow dancers and teachers who just get it. And those shared experiences, although each vastly different, have given me a spark of faith.

I decided to write this article — speaking to a few of my peers whom I so admire — about dancers who have overcome incredible adversity. Interviewing these four dancers has given me hope, insight and a sense of community. From these artists, I’ve learned that my adversity — my injury — is not a setback but instead a stepping stone for an incredible comeback where I will be a stronger dancer because I’ll have grown more aware of my body and more grateful for the ability to dance.

When we dancers take class, audition or perform on stage, we always strive for perfection. But it’s those challenges we’ve all faced that transform us into the dancers we are today. And those stories are important. I hope that these stories can be inspiration to you, too.

When I was 19 years old, I was cut from my dream school. More specifically, days after I’d finished my sophomore year, I received an email informing me that I was being dismissed from my BFA program. The faculty believed that I “would not reach professional readiness”. Pain doesn’t even begin to describe what I went through in the coming days/months/years. I cried a lot, and I doubted everything about my talent, my dream and myself.

“We are defined by the best that is in us, not the worst that has been done to us.” That was the biggest lesson I had to learn when, despite my dismissal, I decided to pursue a professional career in New York. I had to learn to trust myself, and I had to muster up belief inside me that I had something unique and special to offer. It took a long time. It was a full year of “nos” before I finally landed my first job. I leaned on those people who had unwavering belief in me. If you have the support of family, teachers and friends who believe in you, you can make it through almost anything.

I’ve learned that you can take the pain and rejection in your life and use it to better your craft. I spent over a year portraying different “Shark” women in West Side Story. The “Sharks” are the Puerto Ricans who leave behind oppressive circumstances, move to New York and are determined to make a better life for themselves. Sounds familiar, right? They are courageous, tough and inspiring. I knew that if I could be brave enough to tap into the pain of my dismissal — my fight to overcome self-doubt and my will to make it in this business — I could portray the “Sharks” truthfully and authentically. I turned my pain into beautiful, meaningful art. Night after night, I told my story.

Finally, I’ve learned to expect the unexpected and to remember that what’s for you will never pass you by. I never in a million years expected to be cut from school. However, I’ve learned that I wasn’t meant to be there for four years. And that’s okay. I wouldn’t trade the experiences that I have had in place of my would-be junior and senior year for anything in the world. I believe that I transformed my rejection into the beginnings of a wonderful career. I’m a little tougher than I would’ve been had I not seen such a dark time. It’s always nice to hear “yes”, but we can learn a whole lot when we don’t always get what we want. 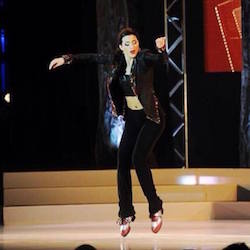 I believe that everyone is born with a calling and a purpose. Mine is dance. When I was four years old, I knew that I would always dance, no matter what the cost. I grew up in the competition circuit. When I turned 14, I began traveling back and forth from New York to Los Angeles to train more intensively, and I began making dance my career.

I’ve always had headaches, but when I turned 16, I knew something was very wrong. My doctor called for an MRI because we were afraid that I had a brain tumor, and we discovered that I had Chiari malformation (a condition in which brain tissue extends into the spinal canal). I had my first brain surgery at 16. When I moved to New York City a year later to pursue my career in dance, it was just too strenuous for my condition, and I was forced to move home shortly thereafter. I struggled with depression, anger and anxiety because I felt like everything I worked my entire life for was ripped away. I started competing in pageants, teaching dance, and choreographing — channeling most of my energy into tap because it’s less strenuous on the body. In June 2014, I was competing in the Miss South Carolina pageant and fainted on stage. I landed in the hospital a week later with meningitis and knew it was all coming back. Shortly after that, I was sent to a Chiari specialist and had my second brain surgery.

I have learned the most about myself between then and now. I was forced to quit dance, literally lie down and let healing run its course for an entire year. I learned that Chiari will be a daily struggle for me. (There is no cure; it’s a deformity, and surgery only improves quality of life.) I also learned that even though I have this disease, I was born to dance, and that’s still possible! Even though I’m not on the big stage, I can dance in other ways. Since my recovery, I am feeling better than ever! I recently got married last Thanksgiving, will be moving to Germany this November, and I plan on exploring the world of dance in Europe. I was called to be a dancer, no matter what the cost. And I have learned that even though I have this obstacle in my body, the heart always wins! 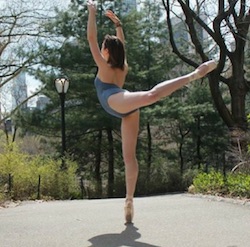 After high school, I danced with the Los Angeles Ballet. My weight quickly plummeted; I was self-isolating to avoid eating, I felt cold and dizzy, and my hair was falling out. My body hurt all the time. I couldn’t sleep through the night. I was in a fog of depression and cried multiple times every day over things that didn’t really matter. I picked fights with people, I was nasty and narcissistic — I hated everyone and hated myself. I rarely thought I looked thin enough, although I was skeletal and clothes hung off my body like they would on a wire hanger. I relocated to Ballet Memphis and then decided to freelance in New York, hoping that the change of environment would magically cure me. Instead, I sunk deeper into my disorder. And to make matters worse, I couldn’t afford treatment.

My real recovery, although ongoing, is pretty recent, and something of a happy/sad accident. I was accepted early decision into the NYU dietetics program (talk about a full circle moment) with a very generous scholarship…that required I attend full-time. Suddenly, I was leaving ballet due to circumstances far beyond my control. And the unexpected happened: a glimpse of real recovery.  To find friends who liked me even when I wasn’t a ballerina was the most unbelievable thing. I was so tied to that identity I assumed no one would want to be friends with just me. My brain, through weight restoration, cooperated, and I found success in my efforts at school. People praised me for objective abilities. Here was an “A”, and it had nothing to do with how I looked in a white leotard. Slowly over the course of the semester, I began to really recover.

And so now here I am. I’m currently not dancing professionally, but I may find my way back. I teach ballet to pre-professional students, and I take class.  I still identify as a dancer, but that has a much broader meaning for me now.  I’m in school studying nutrition and dietetics, where I hope some day to work with eating disorder patients or go into research and advocacy. I’m working on writing a book of short essays of my experience because I believe that speaking up and reducing shame are some of the most clear first steps in solving this problem that the ballet world likes to sweep under the rug. I’m still recovering. I always will be, and there will always be new steps to take, but now it’s a much more enjoyable dance. 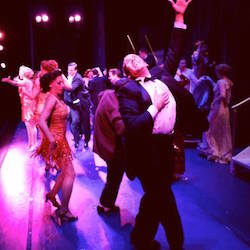 I starting dancing when I was 17, so it goes without saying that I didn’t spend as much time in a studio as many of my colleagues had before I started working professionally. My knowledge of injury prevention as a working dancer was not up to snuff as I entered my third national tour, Catch Me If You Can. True to Jerry Mitchell’s style, the choreography was very athletic, and I was a swing covering a total of eight tracks. One two-show day, I had to do one track at the first performance and an opposite track that evening. At the beginning of the evening show, I heard and felt a small pop in my knee while I was dancing. Two months later, I found out that I had torn my meniscus. Because of my injury, I was asked to leave the tour to rest and recover.

I was devastated and thought I would never dance again professionally. However, soon after getting back to the city, I booked a cruise ship gig as a singer that required little to no dancing. Through that job, I was able to cultivate my singing talents in a way I never thought possible. It stretched me beyond anything I had done before and, at the same time, I was able to allow my knee to recover from the injury.

I have since danced in the national tour of Anything Goes, and I am now the dance captain of the first national tour of Bullets Over Broadway. Life has a funny way of throwing a lot at you at all times. But every time you fall, it’s just another opportunity to show yourself that you can get back up again and better yourself. Nothing is finite. We are always evolving, learning and growing.