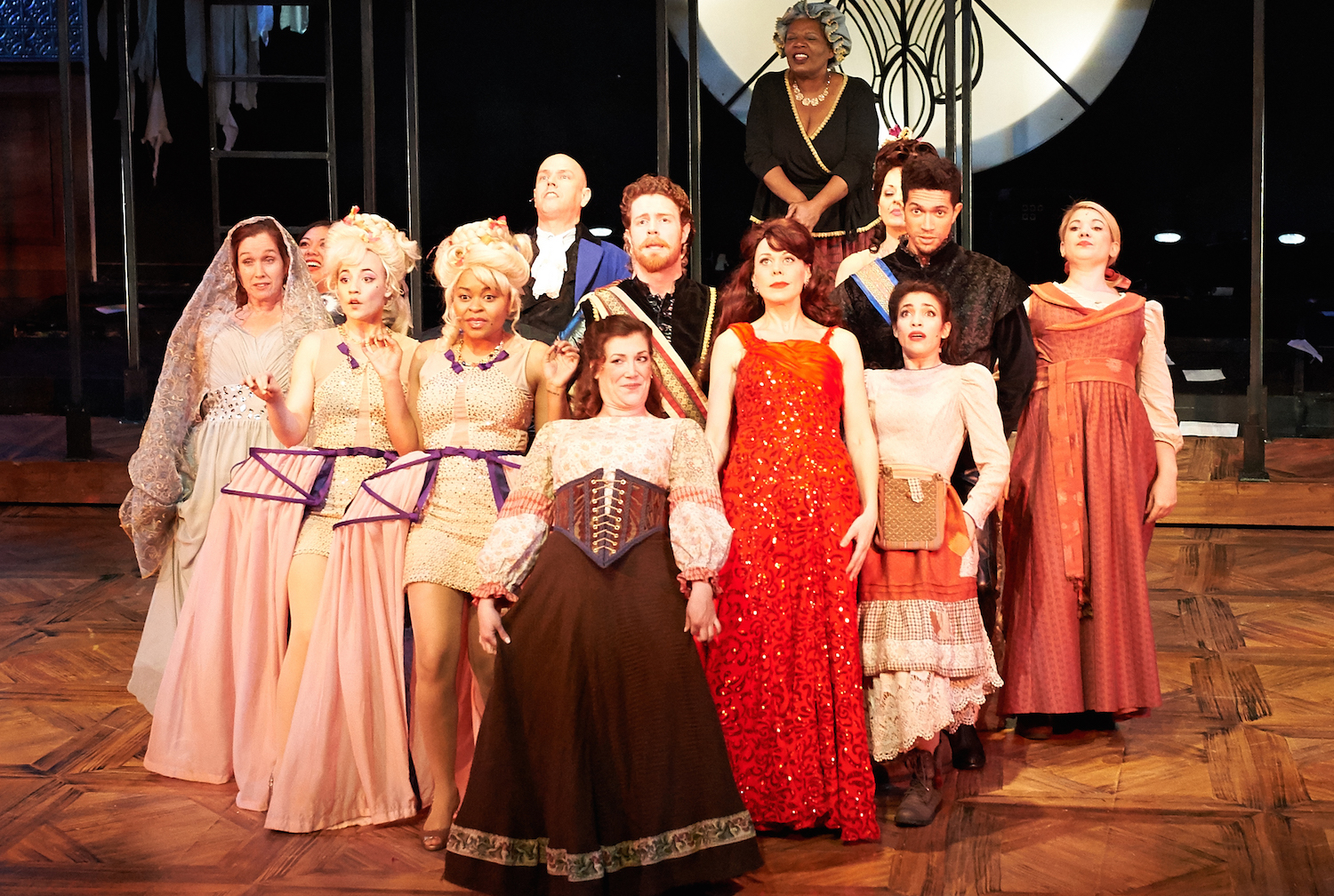 Stephen Sondheim’s Into the Woods takes some of our favorite quintessential childhood fairytale characters, once so shiny in their happily-ever-after glows, and remakes them into deeper, more complex, real people. Undoubtedly, this has always been my favorite element of this popular musical. Thankfully, Aurora Theatre’s current staging of the production more than succeeds in achieving this reformation, all the while charming you with its gorgeous set, wonderful vocals and becoming actors.

Aurora Theatre’s take on the classic musical, directed by Justin Anderson, runs through April 17. Based on the book by James Lapine, its varied characters are perfectly cast, with a decent range of ages and ethnicities represented, to my delight. 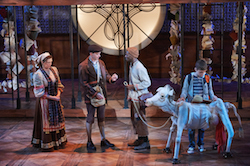 From the first instant that audience members enter the theatre, we are wowed by set designer Jason Sherwood’s library. Towering shelves brimming with books immediately reveal that Anderson has decided to give his own twist to the production.

As the musical begins, a young boy is introduced as our narrator when he picks a shining book off a dark shelf and flips open its cover. Evan Jones, a 13-year-old from Alpharetta, then proceeds to lead us on a literary journey, where we immediately meet the tale’s characters, including the baker (Brandon O’Dell) and his wife (Wendy Melkonian), the witch (Natasha Drena), Rapunzel (Caroline Arapoglou), Cinderella (Diany Rodriguez), Little Red Riding Hood (Shelli Delgado), the Wolf/Steward (Googie Uterhardt), Jack from Jack and the Beanstalk (Brian Walker) and his mother (Bernardine Mitchell). The library transforms into the woods, with the shelves moving and scaffolding being utilized to create the illusion of various levels.

In Act I, the characters are each introduced in a jam-packed opening number, with lots of weaving about and switching from one mini-story to another. Here, it’s obvious at times that the cast is clearly getting warmed up, as the lyrics aren’t fully pronounced in some transitional moments, as they are so clearly later in the show. With the use of some quirky props and deft lighting designed by Mary Parker, however, the charisma of each role is revealed, and the characters’ stories are set in motion.

More characters are welcomed into the plot as Act I chugs along, with Cinderella’s Prince (Benjamin Sims) and Rapunzel’s Prince (Brody Wellmaker) proving to be two of my favorites, stepping in to provide much needed comic relief as they compete for the most agonizing anecdote. It was the opposite of “Agony” watching them suavely sail through their lines. 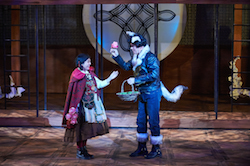 Shelli Delgado and Googie Uterhardt in Act I. Photo by Chris Bartelski.

Act I winds down with strong numbers from the whole cast, with “Second Midnight” building anticipation and Cinderella’s solo “On the Steps of the Palace” achieving great dramatic effect as Rodriguez takes the fairytale princess to new depths of internalization.

To say Act II was an absolute pleasure wouldn’t be enough. The already strong characters are taken to even more wonderful heights as they struggle to come together and kill the giant whom Jack has enraged. Each develops and evolves in intriguing ways, with Delgado’s previously sharp teenage Red Riding Hood softening under the loving care of Cinderella, whom Rodriguez believably transforms into a mothering force. The Baker (O’Dell) fights within himself to find his own conviction and confidence, eventually choosing to “man up” and take charge when he’s needed. His wife is excellently captured by Wendy Melkonian, who charms throughout the whole production in each scene she enters. Her rendezvous in the woods with Cinderella’s Prince reveals her sexuality and femininity flawlessly, adding another layer to her persona as Sims’ hilarious self-involvedness amuses the audience again. Rapunzel, who by this point has gone from a wistful young lady to a drunken mess, dazzles up until her final moments. Arapoglou’s sweet voice was superb throughout, especially in “Stay With Me” from Act I. 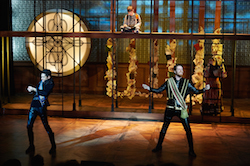 Undeniably, one of the most commanding vocalists of the production was Natasha Drena as the witch, though. She stuns in both “Witch’s Lament” and “Last Midnight”, taking full command of the stage to everyone’s glee.

Choreographer Sarah Turner Sechelski’s movement across the entire work was safe and formulaic. While the characters each brought a little pizazz to it, one can hope that in the future she’ll endeavor to challenge herself and her cast a bit more. With so many diverse personalities, it would have been nice to see this more fully captured in the movement, especially during the finales.

Overall, Aurora Theatre’s production of Into the Woods is not to be missed! In such an intimate venue, these characters are really under the microscope, and this strong cast will absolutely woo you. Expect to be moved! This is musical theatre at its best!

Photo (top): Cast of Into the Woods. Photo by Chris Bartelski.