What does it mean to dance with the heart? Look no further than New York City’s Dance Against Cancer (DAC) to find out.

Each spring since 2011, DAC co-founders Erin Fogarty-Bittner and Daniel Ulbricht have pulled together a star-studded roster of dancers to participate in a fundraising event for a cause at once frighteningly global and deeply personal to them. The National Cancer Institute estimates that in 2016, over 1.6 million new cases of cancer will be detected in the United States, while the World Health Organization charted 14 million new cases around the globe in 2012. [1][2] 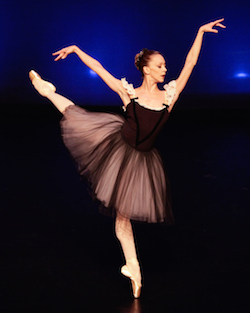 Fogarty-Bittner and Ulbricht, both having lost a parent to the disease, know how shattering such diagnoses can be to patients and their families. (Fogarty-Bittner’s father passed away from colon cancer in 2011, and Ulbricht’s mother departed just last year, after a battle with uterine cancer.) Producing an evening of dance performance to benefit the American Cancer Society (ACS) was a no-brainer for the pair, who felt the desire — or, perhaps more accurately, the need — not only to pay tribute to those who have died from the disease but also to support those living with it and to fuel the race for a cure.

“This is probably the best way for me to honor my mom and for Erin to honor her father, to do something that gives back, that is helping other people’s lives,” explains Ulbricht. “Our long-term aim is to eradicate this awful disease. Our near-term goal is to use dance, to use this gift that we have, as the primary mode to celebrate and create awareness.”

To date, the annual event has raised over $575,000 for the ACS, which distributes the funds on local and national levels. In New York, the organization regularly provides patients with rides to and from medical appointments, with lodging, and with assistance in the management of appearance-related treatment side effects. Nationwide, it has invested more than $4.3 billion in research, while also continuously fueling early-detection programs, supplying health care professionals with the latest resources and training, and educating at-risk communities. 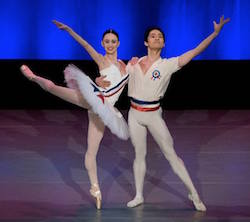 Skylar Brandt and Jeffrey Cirio in ‘Flames of Paris’ by Vasily Vainonen. Photo by Cherylynn Tsushima.

“This is our signature performing arts event,” ACS Senior Event Manager Chloe Lipman tells Dance Informa. “Actually, it was founded as a third-party fundraiser, and when we saw its growth and the potential to reach a particular audience, we decided to bring it into our portfolio.”

But Lipman is careful to stress that the ACS plays a supporting role in the venture. “Erin and Daniel are the masterminds, and the project’s success is really a direct result of them and the wonderful following that they have,” she says.

From the start, DAC proved to be a huge draw for performers from all corners of the dance community, many of whom have experienced close encounters with cancer through family members and friends. Ulbricht, a current principal with New York City Ballet (NYCB), and Fogarty-Bittner, formerly of Carolina Ballet, have no shortage of connections with fellow artists eager to donate their time and talents to the cause. In fact, Ulbricht reports, they have to turn away performers each year in order to maintain a manageable program.

“It’s a good bad problem to have, and it’s our hope that we will never run out of talented people,” he shares. “We’ve had artists from [New York] City Ballet, American Ballet Theatre, Paul Taylor Dance, Broadway. There is no compensation for this, and I give these dancers so much credit for their generosity. They are deciding to do something different with their gifts. We feel that from the most veteran performer to the youngest dancer on the bill.” 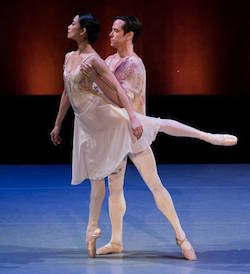 Stella Abrera and Sascha Radetsky in ‘Leaves are Fading’ by Antony Tudor. Photo by Cherylynn Tsushima.

Speaking of the youth contingent, Ulbricht and Fogarty-Bittner are keen to encourage younger dancers to get involved in their efforts. As part of the leadership team at pre-professional dance academy Manhattan Youth Ballet (MYB), empowering the next generation of artists in the classroom is an element of the pair’s regular routine. But to see students look beyond their own goals and place a higher value on their work as dancers has been a remarkable reward, Ulbricht says.

“We want to enrich the tradition of people giving back at a young age,” he adds. “One of the youngest dancers from MYB is on our board. Her mom is battling a very severe bout of cancer, and [this student] is stepping up. She’s as vocal and as supportive as any other adult at the table. These kids are realizing that they can already have an impact.”

Ulbricht acknowledges that “stepping up” in this way can be an emotionally challenging feat for the pros as well as the young participants. Making a passing reference to the fact that this year’s benefit will be the first he dances without his mother, he expresses his admiration for the strength his colleagues show in taking the stage for a cause that cuts extremely close to home. NYCB principal Maria Kowroski prompted tears from the audience and shed some of her own during her 2015 DAC performance of an excerpt from Balanchine’s Mozartiana — one of the last pieces her mother, whom she lost to breast cancer in 2005, saw her dance. Having become a parent herself in November of last year, Kowroski will mark a new milestone with her appearance at next month’s event.

“This is a wonderful way for many of us who have been personally affected by the disease to give back,” Kowroski shares. “[Losing my mom] is still the single most difficult experience I have ever been through. To witness this event grow and evolve to what it has become and see the money we raise go to cancer research is incredible. I’m happy to have been a part of DAC since the beginning and will continue to dance for a cure as long as my legs and feet allow me to do it!” 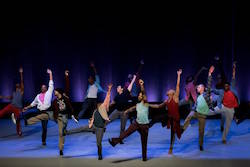 ‘Wild and Free’ by Earl Mosley. Photo by Cherylynn Tsushima.

American Ballet Theatre Soloist Skylar Brandt, who performed at DAC in memory of her grandmother in 2015, deemed the experience a defining moment in her life, crediting its founders as sources of constant inspiration.

“Having the chance to perform in the Dance Against Cancer was an incredible honor,” Brandt says. “The ability to support the cause and fight the disease through the art form of dance was such a privilege, and I am immensely grateful to Daniel and Erin for inviting me to help make a difference in people’s lives. I am so proud of [DAC] and everyone involved with this extraordinary organization.”

Given DAC’s rapid growth and the positive reputation it is building amongst artists and attendees alike, it comes as no surprise that the project has begun to attract national notice. When asked whether there are plans to launch additional events in other locales, Ulbricht thoughtfully replies that the idea “is definitely in our crosshairs. A big part of it is timing. If we were to do it on, say, the West Coast, I’d want it to be a wrecking ball. Right now, what we’re trying to do is make New York so big that it can roll anywhere else more easily, and I think we’re on the cusp of that.” 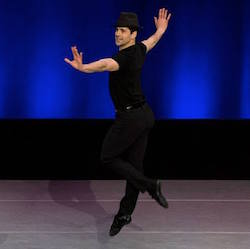 Robert Fairchild in ‘Ballin in the Jack’ by Gene Kelly. Photo by Cherylynn Tsushima.

The challenge of achieving this magnitude without compromising the character of the event is not lost on DAC’s founders, and they have made quality maintenance a high priority. From the substance of the program to the tenor of the entire evening, Ulbricht and Fogarty-Bittner meticulously curate every detail — a fact in which they take great pride.

“We want to create an atmosphere, a ride for our audience and dancers,” Ulbricht asserts. “With this event, there’s a level of accessibility in that [attendees] have the opportunity to look performers in the eyes afterward and realize, ‘Wow, you did something that touched me, that inspired me, that moved me.’ These people are not just exposed to a show, they’re experiencing something; they’re a part of these dancers’ stories, and that — that’s just phenomenal.”

The 2016 Dance Against Cancer will take place at the AXA Equitable Theater (787 7th Avenue) on Monday, April 25. For program and ticketing information, visit dacny.org.