This year’s Capezio Dance Award introduces a historic first – unlike any other year in the award’s history, it will go to an educational institution, The Juilliard School’s Dance Division. The announcement bears additional significance as well. Coincidentally, both the award and the Dance Division are celebrating their 64th anniversaries!

Every year, the Capezio Ballet Makers Dance Foundation bestows the Capezio Dance Award “in recognition of significant contributions to dance in the United States”. The Foundation, a philanthropic organization funded by the dance and apparel manufacturer Capezio Ballet Makers, typically presents the award and its $10,000 honorarium to individual dancers, choreographers, critics, teachers, producers and administrators. The awardee is selected by an independent committee of distinguished national advisors. 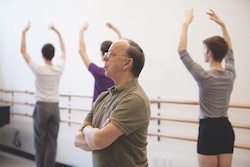 Lawrence Rhodes, artistic director of Juilliard’s Dance Division, will accept the award on behalf of the department at a ceremony in the school’s Willson Theater on Sunday, November 22.

When asked how he responded at the news of the award, Rhodes said he was “totally thrilled.”

“I was beside myself with excitement! I thought it was really a fantastic honor and one that I certainly didn’t expect. I told everybody that runs Juilliard right away. They were also very thrilled,” he exclaimed.

Capezio has been serving the dance field since 1887 and this award, which has been bestowed annually since 1952, is awarded to those who bring respect and distinction to dance and who exhibit innovative, creative and imaginative qualities. Previous recipients include dance legends such as Ted Shawn, Agnes de Mille, Maria Tallchief, Arthur Mitchell, Robert Joffrey, Alvin Ailey, Dorothy Alexander, Fred Astaire, Savion Glover, Trisha Brown and Suzanne Farrell. As a matter of a fact, many prestigious alumni of Juilliard’s Dance Division have received the award, including Paul Taylor.

“There are many places and surveys where colleges and training programs are lined up in order of best overall, and Juilliard has been number one in several of those for quite some time. But to be acknowledged by an organization as prestigious as Capezio with its long history of honoring the best, it’s really quite overwhelming and exciting,” Rhodes said.

Juilliard’s Dance Division currently enrolls 96 exceptional student dancers and staffs 27 highly qualified faculty members. Across each year, the division produces approximately 50 performances, including its popular New Dances program in December (that was started by Rhodes in the fall of 2003) and its spring repertory program in March.

Addressing the spring repertory program, Rhodes noted that the repertory varies widely. He said, “This year we’re doing Paul Taylor, Jerome Robbins and Jiří Kylián. Last year we did Martha Graham and Merce Cunningham. The year before that we did Lar Lubovitch, Twyla Tharp and Eliot Feld. We keep moving the classics around and seeing what it means for our dancers to attempt these great works that have been a part of our history.”

In addition, student dancers have the opportunity to participate in eight choreographic workshops per year and courses related to production, such as “Choreographers and Composers”, which pairs six Juilliard student composers with six student choreographers. (That collaboration results in a special concert series, coming up on November 19-21.) Not to mention, Senior Production, which gives seniors the chance to independently produce a concert every April.

Speaking about the choreographic workshops, Rhodes said, “This year we’ve already seen 68 dances from our current students. It’s amazing! They’re just so creative and you can’t stop them. Generally, they make these dances when the school day is over, so after they’ve already been in class all day.”

Celebrating the school’s massive influence on dance history and the current New York dance scene, the Capezio Dance Award will be presented on November 22 in a ceremony that will open with a piece from the Choreographers and Composers course and will feature a film assemblage of Juilliard’s history.

Quite appropriately, Rhodes noted that the monetary award will be allotted for the division’s scholarship fund – which will in turn allow the division to continue investing in the next generation of dance pioneers and furthering the rich legacy of this prestigious institution.