As I removed my tap shoes and sat down to write this article, I thought, “What is the most important thing I’d like my readers to get from this article?” Well, obviously, I would wish for you all to fall in love with tap dance. I know, I know, that’s quite a lofty goal, but maybe if you’d get a standing ovation with a tap piece, you’ll embrace tap with a healthy respect. It is a truly American genre (now danced worldwide), and it’s a joy and a challenge to create music while you dance. To quote an old phrase: “It’s a treat to beat your feet!” It is my personal hope that rather than recycling the tap of the past, we can keep what is valuable from bygone eras and endeavor to take tap forward in an effective, energetic and entertaining way.

One of your first considerations is to assess the purpose and demographics of the performance for which the piece will be performed. Is it a concert, or a recital, or a commercial setting (such as a showroom or a theme park), or a competition? And what kind of audience would you have: 60 people, or 600, or 2,000? And what is the age span? In addition, is the piece a solo, a small group or a larger production? All of these considerations will guide you in making one of your most important decisions – your choice of music. 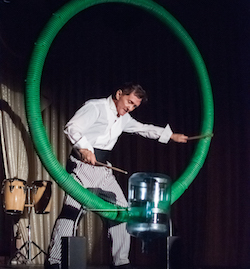 In choosing music, you should choose music that your audience can relate to, that they can attach to and enjoy the groove with the dancers. That doesn’t mean predictable; it’s good to have a few surprises or highlights in the piece, both audibly and visually. Your simplest consideration in choosing music is: Can the audience hear the taps? And that means all the way at the back of the theatre. Music that’s too heavily orchestrated will smother the taps. Also, check out the acoustics in the theatre. In preparing your dancers, I’ll assume that the level of tap technique is adequate to support the choreography. Young dancers should be in a class that includes a healthy dose of technique. A class which only works on a routine short-changes the dancers; they will have less substance to put into a dance.

As a judge, I often see tap pieces which include several dancers who do not execute all the sounds. Make sure each dancer can do the steps alone and a cappella. Then when you reassemble the dance it will be stronger.

Once you’ve chosen your music, listen to it over and over before choreographing so that you can effectively use the phrases and accents in your choreography rather than just choreographing 8’s. If you’re creating an a cappella piece, you need to drill the dancers to keep time; there is generally a tendency to rush, which is very unsettling to the audience. Musicality is the goal of the choreographer and the dancer. (Challenge yourself with music in other meters such as 6/8, 3/4, 5/4, 9/8, etc.)

So now that you’re married to the music, it’s wise to create a theme – a series of steps or a phrase that’s recognizable when it is reprised. It is the signature of the piece, and it should grab the audience both audibly and visually and show the character of the piece. Tap’s musicality can be applied to many styles, from traditional hoofing to Latin, to rap, to blues, classical, to rock and show tunes. 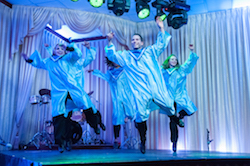 It’s also effective to contrast the difference between direct rhythms (on the beat) and syncopated (off-beat). Since tap sounds are mostly staccato, you can get sustained sounds with a myriad of slides and nerve taps used like a drum roll.

One of the things I’ve seen in judging that really makes me cringe is tapping with the hands held behind the back. While you may think that it lets the dancers concentrate on the feet and gives it uniformity, it subtracts all the energy in the upper body and can become a bad habit. It’ll be more difficult to break that habit when you do need port de bras. When I see the hands held behind the back, it looks to me like the dancers got taken prisoner during their tap dance. One of my colleagues actually refers to it as “prisoner tap”.

At this point, it’s worth mentioning that if there are props in your dance, make sure the dancers can handle them gracefully without anything looking clumsy or cumbersome. If the props are stationary, it can work to create paths in and out, around, over and under, and on top of the props. This can also give you a variety in the pitch of the sounds that the steps lay down.

By Tony Coppola of Dance Informa.

Tap master Tony Coppola is also a former All-American gymnast and a percussionist. He has taught at conventions and judged competitions for several decades. Tony directs and choreographs the Las Vegas-based Coppola Rhythm Ensemble.