In 1975, George Faison became the first African American to win a Tony Award for Best Choreography for The Wiz, a musical known for its strong use of dance and music to tell its own story based on The Wizard of Oz. This past August, in honor of The Wiz’s 40th anniversary, Faison’s musical came back to the stage during New York City’s SummerStage Festival. Not only did Faison recreate some of his original choreography on a batch of young, up-and-coming dancers but also some of the show’s original cast members came back to perform their roles for this special anniversary production.

“Coming back to The Wiz was exhilarating because 40 years is a long time,” Faison tells Dance Informa. “You hope things like choreography will resonate with the young dancers, and the public for that matter. A lot of things stayed the same. The energy of the younger dancers and informing them how we danced and the influences that shaped The Wiz is what we discovered during a five-week intensive. It was really thrilling to recreate it and for it to be accepted in the way that it was.” 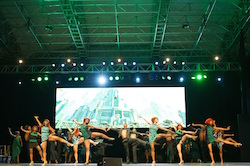 “This musical was such a historic moment for the African American theater community,” says Danni Gee, curator for the nonprofit City Parks Foundation’s SummerStage Performing Arts Festival. “It was an important first for the theater world, as it was the first all African American musical, and George Faison was the first black choreographer to win a Tony award. For the creators to be able to adapt such a beloved classic story as The Wizard of Oz and make it into the hip, funky, hot musical that went on to win seven Tony awards was incredible!”

In order to include some of the original moments of choreography, Faison turned to original cast members Dee Dee Bridgewater, who played Glinda, the Good Witch of the South; André De Shields, the Wiz; Ebony Jo-Ann, who played Addaperle in the Broadway revival; Inaya Day, who was the original understudy to the role of Dorothy; and Garry Q. Lewis, the Scarecrow in the show’s Broadway tour. In addition, Timothy Graphenreed, the show’s original music and dance arranger, joined the team again.

Original cast member Dee Dee Bridgewater says that to perform the 40th anniversary celebration of The Wiz and to reconnect with her fellow performers was “a beautiful stroll down memory lane”.

“Then to have the young dancers really recreate the choreography for the ‘Tornado’ and the ‘Monkey Dance’, that was really great,” Faison adds. “And to see it for the first time in 20 years, live, was really more than exhilarating. We had some exceptional dancers, too – Khalia Campbell, who did the Eye of the Tornado, and Nehemiah Spencer, who did the Lead Monkey in the second act. It was really great.”

The hardest challenge for Faison during this reconstruction process?

“What else? Memory!” he says. “Trying to remember and trying to piece together a lot of the original choreography. And that was a challenge, but then you realize how some of the things were. If I didn’t have those concert dancers early in 1975, I don’t think it would have actually looked the same.”

For Faison, this anniversary celebration of The Wiz was not only a chance to do and see the show again. It was also an opportunity to share it with audiences who were familiar with the musical and also those for whom it was new.

“The audience who had never seen the original Broadway production and have only enjoyed the movie were elated,” he adds. “That’s what live theater does for us, and that’s why we must preserve our live theatrical history and dance history. There’s another generation here, and they must know that that belongs to them. It’s our heritage, our Broadway heritage, our dance heritage. It belongs to all of us. It’s our history.”

For the younger dancers involved in the production, to work with Broadway veterans on a historic show seems to have been quite the rewarding experience. Faison notes that all dancers should have such an opportunity.

“They really took to it like ducks to water, like dancers to a pirouette,” Faison says. “It was really great to see them grow and mature with this, and gain a lot of theatrical knowledge. It was a meaningful experience. We don’t have enough apprenticeships and opportunities for all dancers to actually have a theatrical background and get the kind of apprenticeship that it takes to further their education and become a professional dancer. Every dancer in America should have that experience.”

“That George took the initiative to organize this amazing production, reintroducing much of the original choreography, for me was breathtaking,” says Bridgewater. “It made me realize how blessed we all were to be part of Broadway history, and how blessed we still are to be able to pass on the gauntlet to the young performers who shared the stage with us. George is nothing short of genius, expecting nothing but the best from everyone he works with. I’m proud of our longstanding relationship!”

Gee adds that to present events and performances like The Wiz is a large goal of SummerStage. “I would love for us to be able to continue to present events like these,” she says. “I love musicals, and they are an important element to the fabric of New York City, and being able to present shows like this for free is what SummerStage is all about!”

Photo (top): The cast of ‘The Wiz’ at SummerStage. Photo by Michael Seto, City Parks Foundation.