For her dance film project, Trefoil, director and choreographer Mina Lawton took her dancers and crew from the dance studio of bustling New York City to the barren land and blue sky of the Bonneville Salt Flats in Utah. With the help of 128 backers during a successful Kickstarter campaign, Lawton made what has been a project in the works for five years come to fruition. 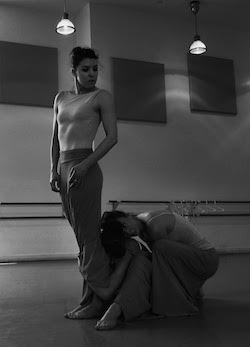 Trefoil is an adaptation of a trio choreographed for three women. It is a reflection on the relationship between time and a person’s identity, with each woman representing either the past, present or future of a single person.

Lawton, who has danced with Company XIV, Alaska Dance Theatre and Abanar, among other companies, has turned to her own choreography and experimentation with short films over the past several years. Trefoil is her largest product.

“There are a variety of different components of dance film that attract me,” Lawton explains, “[Dance] film allows a level of precision that I appreciate as an artist, even though it is challenging. I have the opportunity to not only choreograph the actions and movement but also the manner in which it is seen. There is also the satisfaction of having the completed work be tangible. The height of expression can be revisited and shared, unlike live performance, in which the pinnacle moments are ephemeral and will never be experienced in the same manner again.”

Lawton says that she was initially drawn to the film’s music, Heinrich Ignaz Franz von Biber’s Passacaglia for Solo Violin. When her original vision for a duet fell through, she began to choreograph a solo, but her desire for that duet lingered. With deeper thought, Lawton realized she wanted to explore this concept even further. She was in the present, with thoughts of the past and a wonder of the future. It was then that Trefoil, a word that means “a thing having three parts”, began to unfold. The three entities of past, present and future would be embodied in one work, represented by three female dancers.

“Time and identity can be viewed as having a relationship with one another in the sense that we are a composite of our past, present and future,” Lawton says. “The boundaries between who we are, who we were and who we will become are not concrete, and each influences the others. I appreciate the idea that each individual is a multi-faceted being, which is why the three dancers represent the past, present and future of a single person.”

“To me, time adds layers to our identity,” adds Sarah Atkins, an independent dance artist, who will dance in the film. “I think that at our essence we are who we are from the moment we are born to the end. Time and experience gives us layers and lenses through which we perceive and interact with the world.” 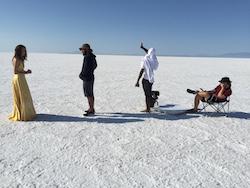 Director/Choreographer Mina Lawton with (from left to right) Director of Photography Christopher Eadicicco and crew Snyder Derival and Mattison Stanton on location at the Bonneville Salt Flats in Utah. Photo by Sarah Atkins.

With Trefoil‘s concept taking shape, Lawton wanted to find a backdrop for the film. She says she chose the Bonneville Salt Flats because the area is barren and expansive, there is nothing man-made, and it is a simple setting.

Lawton, who dances in the film along with Atkins and dancer Traci Finch, and the director of photography, Christopher Eadicicco, ventured to Utah for the filming this August 24-28, through a location permit granted by the Bureau of Land Management. As an opportunity to test how the choreography would feel in an open, outdoor space rather than the confines of a studio, Lawton and the dancers recently held a small residency at her family’s farm in Vermont, where Lawton now resides.

A big challenge, Lawton says, has been adjusting choreography created in the dance studio to a version adapted to film.

“Originally, I made each choreographic choice based on the recognition of the space of a stage and each action’s capacity for communication within the confines of live performance,” Lawton explains. “I am now trying to rekindle the impetus for each of those choreographic decisions and make the necessary translations and adjustments for the camera. The adaptation process has been difficult, but I believe it will prove to be incredibly satisfying in the end.”

As a dancer, Atkins, too, has found the preparation for Trefoil to be unique to any rehearsal process for a live performance.

“It’s very difficult in that the reality of the end product is much further away and not quite so obvious,” Atkins says. “There is a linear piece that is choreographed and could be performed from beginning to end, but that isn’t how it appears in the film at all. It’s been important to find which moments, angles of vision and even locations on the body will capture the essence and meaning of that particular movement.” 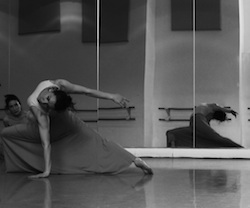 Since this project involved travel, accommodations, dancers’ and crew’s time, location and permit costs, equipment, costumes and more, Lawton launched a Kickstarter campaign in May in hopes of acquiring enough funds. She raised $30,025, $10,000 of which came from a single donor in Vermont. Lawton is incredibly grateful for each donation.

“I was continuously moved to tears throughout the campaign process,” she says. “To have others show support and belief in me and the people I am working with is overwhelming. I want to say thank you to all of the people who have shown support, whether by helping with the preparation of the Kickstarter campaign, making a contribution to the campaign, making a donation through our fiscal sponsor Dance Films Association, or by showing support in personal conversations, as well as on social media.”

Lawton hopes to have Trefoil edited in September, with screenings to be scheduled later this fall. She also hopes to submit the film to dance film festivals. In the meantime, however, she is excited about how the filming went in Utah.

For more on ‘Trefoil’, head to www.trefoilfilm.com.