Miguel Jarquin-Moreland is more than a cast member of the US tour of Jersey Boys, he’s an outspoken ambassador for the show. Dance Informa got to talk with this charismatic guy who, more than once, expressed his gratitude for the honor of being the alternate cast for character Frankie Valli and admitted to frequently singing the show’s songs around the house. What is it about this show that elicits such excitement? The well-spoken Miguel willingly shared his thoughts. Here are some highlights of our conversation.

Jersey Boys is a musical biography of the Four Seasons. What is it about this show and this story that keeps the crowds coming?

“The reason why this show is a standout is because of the writing. The writing (Marshall Brickman and Rick Elice) is beautiful, it is brilliant and it’s a play first. Yes, it’s a musical by definition and yes, there is singing and dancing but, this is a play. It is so cleverly written and the story is so interesting. These guys get in trouble with the mob and there’s a lot of back-story with interesting characters and information about the world these guys lived in. They were Italians from Bellevue NJ, in the 1960s when racism was a prominent issue in the US. These guys are the classic story of rags to riches. There aren’t very many musicals or shows written like this show. There’s a reason why it won the Tony Award in 2006, there’s a reason why John Lloyd Young won the Tony award for Frankie Valli and Christian Hoff won a Tony for his portrayal of Tommie DeVito. Yes, these actors did an amazing job but you can’t do an amazing job without incredible writing. Because of that, the actor gets to be an artist in this show. This piece is art along with music that’s classic and timeless; it’s one of the greatest pieces written in musical history.” 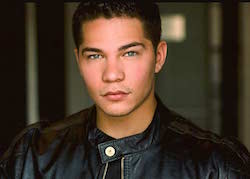 Who should see this show? What experience can an audience member expect?

“I promise you everyome out there is going to love this piece. If you have second guesses, do yourself a favor and come, you won’t regret it. We’ve had rowdy crowds, reserved crowds and everything in between. The music is timeless. Throughout the decades Frankie Valli and the Four Season have created hit after hit that are so catchy they bring you back to an era that was all about the music. These songs are so catching and fun to do and they are all done in a concert style in the show, with the expectation of two pieces. So, during these concert style performed songs we absolutely want the audience to enjoy themselves and get rowdy if they want to. We gladly invite that in.”

What are some nuances of the look, attitude and sound you needed to learn in order to play the role of Frankie Valli during the 1960s?

“The hair and the way these guys dressed and moved, their swagger, established them as a class. You didn’t walk out in your nice jeans and a dress shirt and a flashy pair of sneakers or a hat. If you wanted to impress a woman, you walked out onto the street in a suit. You would wear your hair slicked back. Your hair had to be done in a way that if someone hit your hair, your hair wouldn’t move. It was a different style and way of living. It’s fun playing that kind of brash person living in a dangerous world.

I lived in New York for five years so, after living there, I developed a New York accent. When I’m away from New York it’s not really there but when I’m in New York or on stage I talk no other way than the New York style. It’s a different way of life, internally. I think being able to communicate in that kind of dialect is part of the nature of the piece.

As for the adult language in the piece, it’s part of who these guys are. We as actors aren’t trying to offend anybody and neither were the writers. That’s just the world of this piece. To truly do them justice and to do the piece justice you have to communicate with one another the way these guys really did.”

Do you have a favorite song from the piece?

“I do get pumped every time I do Sherry. I think that’s one of my new favorites. That’s the song when I’m taking a hiatus from the show that I sing around the house more than any other. Sherry is The Four Season’s first hit and they recorded it in 15 minutes in a recording studio on a Sunday. It’s also the first time audiences got to hear the falsetto sound that Frankie Valli learned to perfect. There are tons of people who use falsetto but nobody else has really had that sound to this day.” 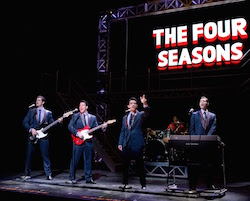 A production photo from the US Tour of ‘Jersey Boys’. Photo by Jeremy Daniel.

The show’s guiding themes revolve around how the four main characters persevere by not giving up, not selling out and not forgetting where they came from. How do you personally relate to these values?

“In this industry, you are going to hear 100 ‘no’s’ before you hear a ‘yes’. If you don’t like hearing the word ‘no’, you are in the wrong business. These guys heard ‘no’ all the time. The more you put yourself out there, by auditioning, putting yourself in front of record labels or sending your demo to different agents and producers; you are going to hear a ton of ‘no’s’. You have to have perseverance. As an artist, that’s what I have and every artist has in order to really make it in this industry. You can’t give up.”

How’s life on tour? What do you do to keep physically and vocally fit?

“It starts with a lot of sleep; you have to get at least 8-9 hours sleep every night. You have to work out everyday and you have to do your vocal exercises. You also can’t eat dairy or bread or something heavy that could possibly alter your voice before going onto stage.

I also have a 72-hour rule meaning that I will not have a drop of alcohol 72 hours leading into going on the stage. That’s something that will definitely affect your voice. It’s my rule with playing this vocally demanding part.”

What do you do for fun while on tour?

“The company is a family. I’m fortunate enough to have my wife on the road with me and I and spend a lot of time with her and our dog but, the majority of people don’t have that. So, the people you travel with become your road family. There are times we coordinate things like jam sessions and take 2-3 hours to just release some artistic energy by doing new material. There’s always something going on during the week. For example, when we were in Chicago, we played the cast of Book of Mormon in WhirlyBall. There’s a lot of silly stuff like that going on. And of course, we are in these wonderful cities that we want to explore. We go sightseeing, visit museums and hang out but, we also take care of ourselves. A lot of nights I rest, watch the Washington Redskins or work on the piece I am currently writing.”

Find Jersey Boys at a city near you. Visit www.jerseyboysinfo.com/tour.