This season at American Ballet Theatre (ABT) was particularly momentous for company dancer Stella Abrera. In May, she performed the title role in Giselle, a long-awaited performance for Abrera and audience members alike, and one that was received with astounding acclaim. Then, on June 30, during a company meeting led by ABT Artistic Director Kevin McKenzie, Abrera was announced as one of the company’s newest principal dancers.

Abrera was promoted alongside dancer Misty Copeland, and other company members, including Skylar Brandt, Thomas Forster, Luciana Paris, Arron Scott and Cassandra Trenary, were promoted to the rank of soloist. The promotion for Abrera, who will celebrate 20 years with ABT this January, was met with tears and a roaring applause from her colleagues. It is a feat of which most young ballerinas and company dancers dream. Abrera’s hard work, resilience after a debilitating injury some years back, and constant dedication to her craft made this promotion much-deserved for the stunning artist. 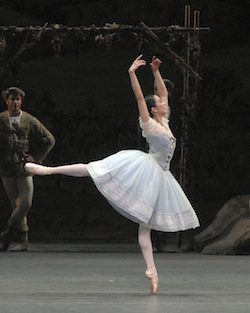 Abrera, originally from South Pasadena, California, says she spent hours as a young ballet student studying videos of ABT performances, particularly one of Don Quixote with Cynthia Harvey and Mikhail Baryshnikov at the Metropolitan Opera House.

“The beautiful technique, high energy and witty acting of the dancers in that video really inspired me, and I desperately wanted to be on stage among them,” Abrera tells Dance Informa.

In 1996, Abrera joined ABT as an apprentice and would, too, grace the Met stage. She recalls several memorable performances and roles during these years with ABT: the central couple in The Leaves are Fading with her husband, Sascha Radetsky; a performance of Symphonie Concertante, opposite ABT Principal and good friend, Gillian Murphy, during an ABT alumni reunion; the role of Gulnare in Ethan Stiefel’s farewell performance of Le Corsaire; and roles that she says hold special places in her heart, such as Gamzatti in La Bayadère, Myrta in Giselle, Les Sylphides, a Stomper in In the Upper Room and Lady Capulet in Romeo and Juliet.

Even more recently, Abrera has debuted in major roles, including Cinderella in Frederick Ashton’s Cinderella, Clara in Alexei Ratmansky’s The Nutcracker and Giselle in McKenzie’s staging of Giselle.

Perhaps unique to Abrera’s rise to principal status was the challenge she endured due to an injury that left her unable to even walk properly several years ago. What seemed like a calf injury actually stemmed from a more severe overstretched sciatic nerve in her back.

“A proper diagnosis eluded me for months, and I began to question whether I would ever walk again at a normal pace and without serious pain,” Abrera explains. “Many months of rehab and strengthening, trial and error, improvement and relapse ensued. Eventually, I clawed my way back to the stage, with the support of my wonderful husband, dear friends and family. But I returned a different dancer and person. My approach to ballet technique had become more scientific, and, most importantly, my mindset had shifted. Instead of dancing to fulfill my girlhood dream of being a principal, I focused simply on becoming the best dancer and artist I could possibly be. I didn’t even consider promotion. Dancing, at any rank, is an incredible gift. I vowed to never forget that.” 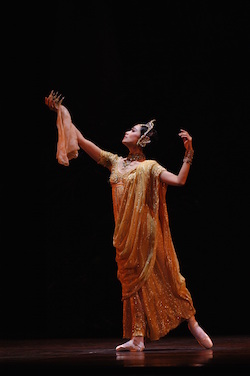 ABT Principal Dancer Stella Abrera as one of her favorite roles, Gamzatti in ‘La Bayadère.’ Photo by Marty Sohl.

With this new approach to her dancing, Abrera came back stronger than ever. She says she continues to work on all aspects of her craft – technique, artistry, characterization and partnering. She reminds herself to “exhale, relax and become grounded”, and to not overwork or “muscle” each step.

“I try to find moments of stillness and calm amid the more powerful steps, to give a phrase more texture,” Abrera says. “I try to apply the same ideas to acting. I’ve discovered that my face is quite malleable and contorts easily, and so I have to hold back a bit when it comes to facial expressions. Cue the phrase ‘less is more’. I train outside the studio nearly every day as well. Cross-training is vital to keeping my body healthy and more prepared to handle ABT’s vigorous and often high-impact choreography.”

Abrera exudes grace and gratitude when she speaks of her promotion announced on that June afternoon. She recalls being overwhelmed with emotions – shock, elation, disbelief.

“My coworkers gave me a loving and boisterous round of applause, and I promptly burst into tears,” she says. “I’ll always treasure that moment.”

The principal dancer has also received tremendous support via social media from fans, many of whom point out that Abrera holds another distinction: she is the first Filipino-American principal at ABT. Although she seems surprised that this title has come up so often, she is appreciative for all of the support and love.

“I feel so grateful for the wonderful support the dance world has shown me,” Abrera says. “I’ve received, via social media, a few special shout-outs from Filipino dancers. When they cite me as an inspiration, I feel immensely honored, and I sure hope I can continue to inspire them. I also hope that the story of my long and turbulent journey to the rank of principal can connect with young dancers of all backgrounds.”

Photo (top): Stella Abrera as Clara, the Princess, in The Nutcracker. Photo by Rosalie O’Connor.