Our business is notoriously cutthroat. And it’s no secret that some of dance history’s greatest choreographers were also infamously hard on their dancers. However ‘old-school’ this mentality may seem, it still perpetuates the notion that discipline and degradation produce great dancing. Fortunately, it is heartening to know that there are people out there working to—and succeeding at—changing this stigma. Antoinette DiPietropolo is a sought-after choreographer known for her keen director’s eye, smart sense of humor, and heart of pure gold.

Growing up in South Jersey, Antoinette always seemed to have the choreographer’s gene, though completely unbeknownst to her at the time. “As a kid,” remembers Antoinette, “my cabbage patch kid had a favorite song and signature ‘moves.’ I would make up a dance to the theme song of ‘Night Court.’ And then, when MTV came out, I learned all the dances—I was especially drawn to the story-telling music videos of Madonna and Michael Jackson.”

Though active in cheerleading, gymnastics, and softball throughout her youth, it wasn’t until middle school that theatre really came into the picture. “I was in the audience watching my older sister’s high school musical. She was in a wonderful pirate costume, I remember. It was in that moment, sitting house right, that I decided I wanted to do that—I had to be on stage, too!” And with that, Antoinette caught the theatre bug. Starting the following year, she participated in (and often helped choreograph) each of her 8th-12th grade high school musicals (the first being Annie, a show that would continue to be significant throughout Antoinette’s career). 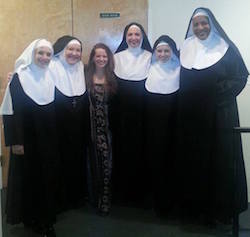 “My training and experience were sporadic,” admits Antoinette. “But had I grown up in a traditional dance studio, I wouldn’t have thrived in the same way. I think the diversity I grew up with fueled me creatively in that I was able to find my way and create my own path.”

After high school, Antoinette continued to find herself gravitating towards musical theatre. She moved to New York City to attend the American Musical and Dramatic Academy (AMDA). “Early in the fall, a teacher advised me, ‘You’d better be able to dance really well.’ She said this because I’m so tiny (not quite 4’10”), and in order to succeed in this business, I had to be amazing at everything.” But instead of getting discouraged by the comment, Antoinette doubled up on her dance courses and landed herself in all the advanced classes before Christmas break.

That’s not to say that Antoinette didn’t feel intimidated. “Ballet was really hard for me,” she admits. “I would go home crying after almost every class. I felt like the worst dancer and that I couldn’t catch up to the years of training and elegance that the other dancers grew up with. I was so in awe of the beauty around me and overwhelmed by the thought that I would never attain that. It took a lot of tears and a lot of time, but when I finally realized the importance of accepting my own journey and where I was in that moment, my dancing improved exponentially. Once I took the pressure off myself, that’s when I really grew.”

Both her instructors and her peers were amazed. “I had a different drive than a lot of the other dancers since I had so much catch-up to do,” she says. “I would go into the studio at night to rehearse, I wasn’t afraid to ask my teachers about technique, and I naturally paid attention to the direction and growth of other students in class.”

Ready to take on the world after all her hard work at AMDA, Antoinette headed off to her first big audition—for the Broadway national tour of Annie. “I had no idea how a dance call was run,” confesses Antoinette. “There were a lot of little kids at the audition who were having trouble picking up the choreography…So, I volunteered to dance in the front of the room.” The gutsy move paid off—After the audition the creative team asked Antoinette if she wanted to assist the director and choreographer! “That seemed a bit more up my alley,” Antoinette recalls.

In addition to performing in national tours and at regional theatres across the country, Antoinette continued to assist for notable choreographers in the industry such as Marcia Milgrom Dodge, Liza Gennaro, Ken Roberson, and Keith Andrews. “After I had been an assistant on a couple major national tours, I realized I could really do this. People would call me because I’m one of the few people who knows the original choreography to Annie, How the Grinch Stole Christmas, and Ragtime—And how lucky am I? But eventually, I wanted to start creating my own work.” 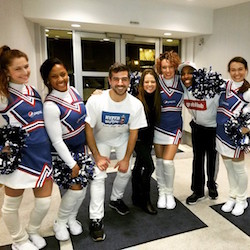 And create she did. While the leap from associate choreographer to choreographer wasn’t exactly easy, Antoinette made it happen. Over the years she has choreographed Off-Broadway for regional theatres, the Joyce Soho, the Big Apple Circus, and an upcoming national tour. Her choreography has been described as “delightfully inventive” (Smithtown Matters), “thrilling, magical” (DC Metro), and “friendly, lighthearted, and entertaining” (New York Times).

Antoinette’s whole career has been a cycle of performing, directing, and choreographing. “I really like to perform at least once a year in order to keep myself grounded in how to treat performers,” she says. “I feel like a lot of choreographers and directors stop performing and forget…And that’s sad. Why do they treat dancers so harshly? I think it generally comes from a choreographer or director’s own insecurities and fears. So, what I try to do as a choreographer is to be as prepared as possible so that once I’m in rehearsals, I have no insecurities, no inhibitions, and I can just have a blast! Seriously, what’s there to be angry about if I’m prepared? You can only do the best you can. If nothing works out, we’re all in this together to make it work—and that can be exciting.”

When beginning work on a new project, every choreographer’s process is uniquely different. After reading the script and hearing the soundtrack for the first time, Antoinette says, “the very first thing I do is immediately write down all of my initial instincts and images I envision.” The next step is a meeting with the director to make sure the creative team is on the same page in terms of their vision for the show. Then begin design meetings to discuss the set and costumes and necessary props. “A lot of times I don’t have much control over the set or costumes because of the show’s budget,” says Antoinette.” “This forces me to be extra creative—which I love! It’s a fun challenge to create patterns, levels, and pictures on stage to help tell the story and sentiment of a song.”

It is not until after all of these meeting that Antoinette begins to really choreograph the show. “I start out with a ‘shell’ for each number—the bigger picture of ‘what is the story and build of the number, beginning middle and end?’ And then I get to specific movements and steps—though these are sure to change once rehearsals start because I get so inspired by the dancers and actors in the room.” But she’s not finished yet! “Lastly, I’ll watch a recording of the original Broadway show. I never watch it until I finish choreographing myself, but I believe it’s important because sometimes there are specific music cues that necessitate certain choreography or iconic moments that audiences expect to see.” 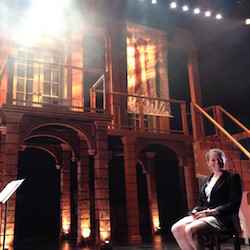 With a notebook full of doodles and annotations, Antoinette then begins rehearsals with the cast. “I come into the rehearsal studio as prepared as I can possibly be—but I never expect to do the version that I had planned! I have a roadmap and have done my research, but when we start rehearsals I let go and allow the dancers to inspire the choreography and bring themselves to the work, too. That’s when the choreography really takes on a life of it’s own, one that the dancers feel invested in and we all feel proud of.”

Having been an associate choreographer and dance captain herself, Antoinette often works with an assistant. “When you’re the choreographer, your brain cannot focus on knowing your specific choreography (every single count and detail). Once you go there, you can’t look at the bigger picture and create anything. You’re not open to inventing, to fixing, to making the whole better. If I’m sitting in the front of the room noting that Sally didn’t turn her head on the count of ‘2’ or Joe didn’t pick up his knee high enough in the passé, instead of looking at the bigger picture and asking if the energy of the piece is working and if the story is being told well, then I can’t create. That’s why I like to work with an assistant or dance captain to fix those little details. Can I see them? Of course. But if I worry about them, I’m not looking at the bigger picture.”

If you haven’t sensed it yet, Antoinette is known for running relaxed and convivial rehearsals—but ones that still follow a thorough schedule and turn out critically acclaimed productions. “The only way for me to stay creative,” she describes, “is when everyone is open. Just because of my title as ‘choreographer,’ the cast knows that I have the final say. But I don’t have to yell at my dancers and assert control over the room in order to get work done. When everyone is comfortable and having fun, that keeps us all in the moment and as creative as possible. This is how we can all have the best experience possible and I get the best out of my dancers.”

But this idyllic rehearsal environment certainly isn’t the norm in show business. “I honestly think the industry is stereotypically so opposite because this is a big ego-driven, fear-based business. Sure, I could try to be meaner and more hard-edged to be a ‘successful choreographer.’ But that’s not me. I want the respect of my dancers by respecting them: taking care of them and making them look and feel their best. That’s how I feel like I really get the best work. Fear stifles creativity. I don’t think people can be present in fear. So if I’m putting a fear in my dancers, and am fearful myself of failure or of losing control of the room, we’ve all lost. I want to go to work happy and want everyone else to feel the same. The only way I know how to be creative is if there’s an open, un-fearful, no-ego environment.”

There are two ways to be a leader: by creating fear or by fostering respect. It’s clear which one Antoinette’s chosen. And what’s more, it’s clear that this atypical approach can produce equally—and perhaps even more—spectacular dancing. While choreographing a Broadway show is definitely a dream for Antoinette, it is not simply a check off her bucket list. “I’m never going to change myself and my work ethic just to climb up the ladder of ‘success,’” she says. “Ultimately, I just want to continue creating good work with good people. I think that’s my greatest goal.”