It’s only been a little over a year since Jacob Jonas officially established his own company, Jacob Jonas The Company, but he and his group have big plans for the dance community. They’ve already made a huge impression at the Dance Camera West Festival this past May; the company is invited to perform at the Jacob’s Pillow Inside/Out Festival in July; and plans are in the works for the company’s next full-length production featuring guest choreographer Donald Byrd.

Amidst all of these exciting performances, however, lies an underlying, stronger desire for Jonas: to build the art of dance to be a more united, community-driven, inspiring and popular art form. It’s a big challenge, but Jonas, the company’s fearless leader, could be the guy to do it.

Jonas started his dance career as a street performer but says that, although he learned a lot as a dancer, he never truly felt fulfilled. Thus began his journey to create his own work. Some encouraged him to choreograph, and people took notice. In 2013, Jonas placed third at the Capezio A.C.E. Awards and was able to create his own full-length production. Shortly thereafter, Jacob Jonas The Company was launched. 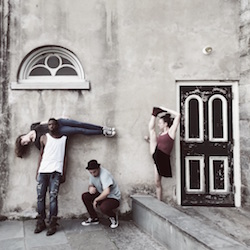 The company is based in Los Angeles and, for the time being, performs primarily Jonas’ choreography, which he says includes elements of contemporary ballet, breakdancing, popping and circus art. Because of this eclectic style, he says he looks for dancers who have an open mind and “a lot of tools in their toolbox”.

“The company is as it’s evolving right now,” Jonas says. “We’ve created a very strong infrastructure. We create dance for the stage and for the camera through film and photography as well as collaborating with different mediums of art. We also have an arts education department, JJTC (ED). So within this infrastructure, we have a strong administration, data base of performing artists, and a list of collaborators to work with to create this content.”

It is this sense of community, of coming and working together, in which Jonas seems to thrive.

In fact, his work, Impact LA | A Generational Piece, which premiered at the Dance Camera West Festival, brought together 25 of the most prestigious dancers and choreographers on stage in a single dance event. One by one, these dancers, including former Alvin Ailey dancer Hector Mercado, Emmy-winning choreographer Anita Mann, both of whom where consultants on the piece, and more, improvised and stated their name, age and how dance has impacted their life.

“It was probably the proudest moment of my career,” Jonas comments. “And a few other people said the same thing. I got a message from a dancer who said, ‘I’ve worked with Jerome Robbins, Alvin Ailey and the list goes on, and that was for sure one of the proudest moments of my career.’ It was a really, really special moment.”

The company’s next big collaborative event is slated for January 2016 – a full-length production that Jonas plans to be the first of an ongoing series, The Concert/Commercial Series. Jonas, along with one commercial dance choreographer and one concert dance choreographer, will all split a bill under a theme. For January, the theme will be “space.” Jonas will be collaborating and consulting with David Tytler, a professor in Physics at UC San Diego with a focus on Observational Cosmology, and Donald Byrd will be one of the guest choreographers.

Jonas, who began his career performing on the street and other site-specific venues rather than on stage in a theater, brings this idea of non-traditional performance spaces to his company. In fact, for “Spaced”, plans are in the works to present the piece at a venue that focuses on cosmology.

“It’s a more fun atmosphere for the audience,” Jonas says, “letting these environments be part of the performance essentially. It doesn’t have to be a theater.” 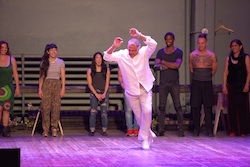 Performing in non-traditional venues also aids in Jonas’ vision of making dance more accessible, especially to the younger generations. And his goal depends not only on his own work but also upon the efforts of the arts community at large.

“We’d like to encourage younger companies that have a more innovative approach than kind of old ways of thinking,” he adds. “Then it will start to attract younger audiences. Because most dance audiences have about 50-90-year-old people in it, so our goal with the company is to not only attract that audience but to attract people who are younger and make dance popular as well.”

In addition, Jonas hopes that theaters, local ones, will start to focus more on the local companies, offering them a place to perform and, again, exposing communities to a wider range of dance, not just national companies that have name recognition.

“In film, you have all these filmmakers – Steven Spielberg, Quentin Tarantino, different directors – but they support each other, and that’s why film is an art form that’s successful,” Jonas suggests. “I feel like dance as an art form, we’re not supporting each other enough, we’re not encouraging each other enough, and I think that’s why dance isn’t doing so well. I think theaters aren’t creating opportunities for local companies, and I think that’s why communities aren’t thriving enough. And I think the only way any of this is going to happen is if we all get together.”

Jonas offers himself – and his company, which already he calls a “family” – as the “umbrella” for this feat. He has created various community events – an Instagram meet-up called #CamerasandDancers, and also a monthly improv night in Los Angeles – in the hopes of developing a strong community of dancers and artists.

“I want to organize this togetherness and this sense of community and to organize a caliber, a set standard of what good dance is,” Jonas says. “I know it’s very ambitious, but I have the right people involved to guide me and steer my direction in case I do not think the right way. I’ve already created strong relationships in LA with the top companies here and the top theaters here, and within the next two to three years, I think we’re really going to make an impact in dance. I really encourage anyone to come on board with us, provide ideas and opportunities and help us make all these things come into action so we’re not just talking, we’re actually doing.”

To learn more about Jonas, his company and the group’s ongoing and compelling projects, head to www.jacobjonas.com. And be sure to follow the company’s Instagram event #CamerasandDancers.