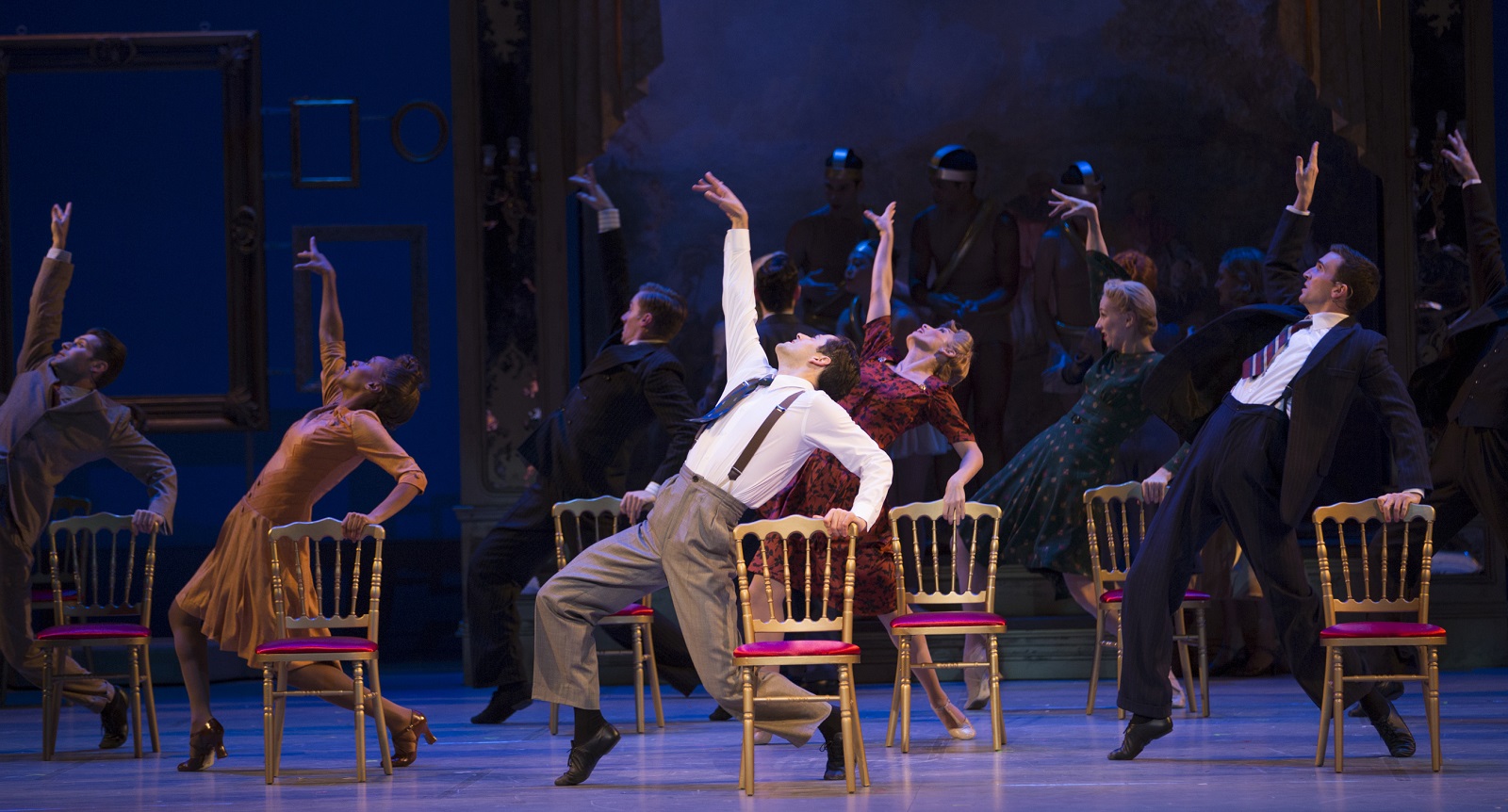 Caitlin Abraham is one of those dancers you notice the minute she walks into the room. Her striking features: a tall, lean physique, dark doe-y eyes, and curly brown hair, are even secondary to her exquisite technique and glowing poise. With beauty, talent, and a heart of gold, it’s no wonder Caitlin seems to always, always be working. And to top it off, Caitlin’s often cast as the most important job in the show: the swing. Now swinging for her third time in An American in Paris (previously La Cage aux Folles on Broadway and Chicago on tour), Caitlin luckily had a free moment to chat with Dance Informa about what it really means to be a swing.

What was your dance and musical theatre training growing up?

“I was born and raised in New Jersey where I studied ballet, tap, and gymnastics at a small school until my family moved to Detroit. That’s when I got serious about ballet. All I wanted was ballet. Three hours per week eventually turned into twenty hours per week! I left home at sixteen to go to Interlochen Arts Academy. As for musical theatre, I didn’t train much as a kid. I took drama in high school but it was very hard to balance that with my serious ballet training. I mean, I sang with my daddy at church, but I didn’t grow up with any real vocal training or anything until I started to think beyond the ballet world. Twyla Tharp’s Movin’ Out made me realize that life ‘after’ ballet could be Broadway.” 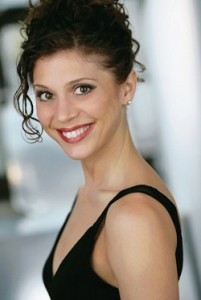 Caitlin Abraham, Swing in ‘An American in Paris.’

What are some of your favorite credits?

My very first credit when I moved to New York was On the Town at Papermill Playhouse. I remember waking up every morning with the song, “New York, New York” in my head—it just felt so right! Later I played Liz in Chicago on tour. Chicago was another one of those musicals that really sparked my interest in theatre. The female characters were amazing—so strong, sexy and powerful.

What was the audition process like for An American in Paris?

“I made it to final callbacks for the initial workshop but couldn’t attend because it fell on a day when I was actually playing Cassie in A Chorus Line out in California. But I really wanted to make up for it. The creative team came to San Francisco as part of the audition tour and, even though it was the day of our invited dress for A Chorus Line, I spent the whole day auditioning again. I made it to the final four at the end, but didn’t get the gig. When I came back to New York, however, they were auditioning again. Rumor had it that there were hardly any spots open, but of course I went anyway! That audition was incredible. The stakes were so high and it was exciting to be dancing amongst some of the most talented dancers in the city.

One of the most memorable moments of the audition was when I got to partner with a principal dancer from New York City Ballet. Christopher Wheeldon’s choreography feels so amazingly lyrical—how you arc through melodic line. I was auditioning right in front of him and nailed a triple pirouette! In my head I was like, ‘That was good!’ But, there was a whole lot of good in that room! Well, I got the call on my birthday. That was pretty much the best present ever!”

What was it like rehearsing and performing in Paris?

“This is an enormous show with a lot of sets and moving parts. The language barrier was also tough sometimes. Paris is such a different culture, too. We’re so inundated with musical theatre here in the US, but in Paris, it was so new and fresh and exciting.”

How did this out-of-town engagement inspire the show before its highly anticipated Broadway run?

“Just living in Paris, walking the streets, visiting the museums, seeing the monuments, talking with people, eating the food, and embracing the lifestyle fostered a sense of groundedness in the show itself. It gave all of us a very rich point of reference. We didn’t just research the culture and history of the show—we basically lived it! I feel like it gave us so much flavor and also a real ability to transform the show not into a Broadway stage, but into Paris itself. We got rave reviews in Paris…and that only sparked our desire to really bring something spectacular back to Broadway.”

What makes An American in Paris different from some of the other shows on Broadway right now?

“I have to say that there’s something really special about George Gershwin’s music. It’s magical to sing and dance to such a lush score. And Christopher Wheeldon’s choreography has such arc and rhythm to it. As a dancer, it’s so rare that you actually get to use all of your skills in a single show. We’re doing ballet, pointe, partnering, tap, and jazz! Some numbers are up to fourteen minutes long—so the dancing really tells the story. There’s also something very genuine about our show. It’s not giving you sass. There are definitely elements of humor, but there’s nothing crass or trendy. You know, our show is elegant. The characters are beautiful, aspirational and real—and that seems to really resonate with our audiences. Nowadays, I don’t think you’ll find that in many shows on Broadway.”

You’ve been a swing before—you must be an expert by now! What is it like to be a swing?

“Well, you never get bored…because you never know what’s coming. I do six different tracks in the show—some are more dancer-tracks while others are more singer-tracks— so I really get to use all of my skills. A swing needs to be really intelligent, organized, reliable, and professional. You’re not on stage every night and that takes a lot of discipline to be ready at any moment (hours before, minutes before, or even during Intermission). Two hours before curtain I’m always watching my phone as if I were a surgeon on-call!” 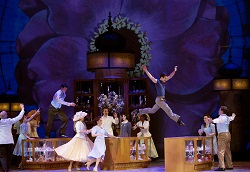 An American in Paris. Photo by Angela Sterling, 2014.

What do you do during shows when you’re not performing?

“I do paperwork, often, because there are a lot of ‘track sheets’ that I use to keep track of all the wings, sets, blocking, and choreography. Another cool thing about our show is that we move all of the sets ourselves. There’s not a lot of mechanics involved. It’s almost as if the transitions are part of the show’s choreography. There are nearly four hundred color-coated spike marks that I need to know! I keep both long-form ‘track sheets’ backstage and also little ‘quick books’ if I’m thrown on for a certain track. If I’m not doing paperwork, you’ll probably find me in the studio (yes, we have a studio backstage!) where I can review choreography, stretch, or work on my harmonies. Sometimes I’ll ‘trail’ backstage which means I’ll literally follow an actor throughout the show (on and off-stage) so I am fully familiar with their entrances, exits, and backstage choreography. There’s very, very little room backstage so the backstage choreography (quick changes, prop hand-offs, etc.) are just as important and what goes on on-stage. Another thing swings can do during a show is to watch from the front of the house. This is useful to keep track of spacing and choreography. It’s really important to stay ‘in-touch’ with the show even when you’re not on stage.”

How did the rehearsal process go?

“I would learn the choreography in the back of the room at the same time the dancers were learning it. Then I would go to my notes and make sure to record the choreography in a way that made sense to me. I had to record not just the steps, but also the spacing and traffic patterns. The traffic is probably one of the most important elements for a swing to understand because you want to go in seamlessly and safely. You don’t want it to be a day at the rodeo! Therefore, you have to be accurate to remember when you’re crossing downstage or upstage, before or after, left or right. I sort of consider myself like a firefighter—as soon as I get the call I just go and I know what to do. That’s your job as a swing: to make the show run smoothly.”

How do you stay performance-ready all the time?

“I warm up­ both physically and vocally before every show. I take care of myself just as I would if I were performing on-stage every night—eat healthy food, get enough sleep, go to the gym, go to ballet class. It’s really about keeping yourself in ‘tip-top’ shape but also stimulated, too. You’re not expending that energy for two hours every night so you have to find other ways to express that in order to keep your integrity as a performer.”

While you may not get the chance to see Caitlin performing on stage, swings are an integral part of any show. An American in Paris is currently playing at The Palace Theatre. Tickets are available at Ticketmaster.com. If I were you, I’d be sure to check out this spectacular production before Tony Awards season (An American in Paris is tied with Fun Home for the most—twelve—nominations including Best Choreography and Best Musical).

Photo(top): The company perform An American In Paris. Photo by Angela Sterling 2014.