Dance Informa caught up with Stephen “tWitch” Boss of So You Think You Can Dance fame while he was teaching at 24Seven Dance Convention in Atlanta in late March.

In our interview, tWitch dished on his newly announced role as mentor on SYTYCD with Travis Wall, plus his role in the film Magic Mike XXL, his recent performance with the First Lady, how him and Allison Holker balance their relationship with work, and a dream he hopes to achieve down the road…

Congratulations on being named a mentor for So You Think You Can Dance! What is it like to have gone from being a contestant to an All-Star to now a mentor?

“The journey’s been incredible! It’s come full circle, which is truly amazing! If I hadn’t made it into the show the year I competed, I would have gone into the Navy. That was my plan. So now every time I look back on my experience as a competitor and how they invite me back today, I feel blessed. It’s incredible!

Being named a mentor is really great because this is something that Travis and myself wish we had had while we were competing. You want to have somebody who’s been through it that you can talk to. We would call our friends and get advice, but that was it. So to have someone there that’s been appointed, who’s been through it, that’s been an all-star, a choreographer or a judge, that’s incredible. We have so many different points-of-view to bring to a contestant, which is super, super, super helpful.” 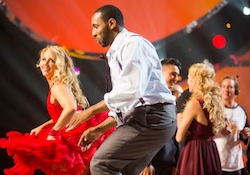 All-Stars Chelsie Hightower and tWitch performing on ‘So You Think You Can Dance’ Season 10 Top 8 episode. Photo courtesy of FOX.

It sounds like you will be a major help to this season’s competitors! Can you tell us more about the Street component of this season? It’s been announced that the new season will feature Stage dancers vs. Street dancers. What’s that about?

“The Street Team is going to basically be comprised of any dance that is found on the street and not necessarily being taught or trained in studios. And that goes for a wide variety of things. Many people have been thinking the new show format is hip-hop vs. contemporary but that’s not necessarily it. There are ballroom styles that have a street component to them, like salsa, Argentine Tango and so on. So we very well may have a ballroom dancer on the Street Team.”

That sounds interesting! So, what stage is the show in now? Have you met the dancers you’ll be mentoring?

“Travis and I will actually be going to the Vegas auditions at the end of April. So that will be the first time we will see everybody that they’ve brought together from all over in the regional auditions. So that is really exciting!”

Will you get to dabble in choreography in this role?

“I myself won’t be doing choreography but maybe Travis will. I’ll work with the dancers on the choreography that’s been set on them and give them notes that the choreographer would like them to focus on… We want to make the contestants look their absolute best.

On top of this, Travis and I are in a race to see which dancer is going to be America’s favorite. We both want it to be one of ours!” 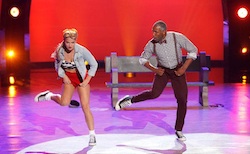 What would you say to the SYTYCD fans who are unsure of the new format? Why do you think people should tune in and give this new setup a chance?

“Especially the die-hard SYTYCD fans, they should be sure to tune in. It’s still everything you love about SYTYCD and they’re still going to see amazing dancers and amazing choreography every single week… There is bound to be something mind-blowing every episode. I think that is incentive enough.

Also, speaking from the Street perspective, this season is exciting because we’ll be equally recognizing some phenomenal street dancers. In past seasons we’ve lost some of the best street performers because they couldn’t pick up some choreography like ballroom and stuff like that. This time in Vegas we’re eliminating that component and each group’s dancers will be doing all of the things they’re more used to – Travis’ dancers doing ballet, contemporary and jazz and us doing all street choreography. So they won’t be thrown completely out of their comfort zone, but rather just challenged and stretched.”

Let’s talk about Magic Mike XXL. How did you get the opportunity to star in this film?

“I got the opportunity because Channing [Tatum], who wrote the story, reached out. The guy I play, my character, is Malik.

In the first Magic Mike, the group of guys take a road trip to a stripper convention and on the way they stop by another club because they need an emcee, someone to host them on the mic. In this club there are different performers, which is where I come in. In this film, I’m acting alongside Donald Glover and Michael Strahan. There’s a scene where Channing and I dance together. We have a strip off, which is epic in it’s own right… [Laughs.]” 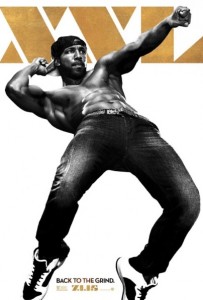 Did you choreograph for the film? What was filming like?

“No, I didn’t. Alison Faulk did. She did an incredible job. She did everything to a ‘T’ and it was amazing, because all the guys felt comfortable.

Even though we were all playing strippers and taking off our clothes, which can be uncomfortable, it wasn’t that bad because we basically spent all rehearsal in so much laughter. You would think from the outside perspective that things can get awkward sometimes, but it wasn’t because everything was so hilarious. Everybody was so professional. And we all laughed about the fact that if anyone walked into the room and didn’t know what they were walking in on, it would be so funny because we’d be caught in the most ridiculous positions. But it was great.

The guys were fantastic. Channing is one of my favorite guys. While he’s an international mega-star, he is so real and sits and talks to you at eye-level. There is no ego there and that spread throughout the whole production. All the guys are very cool. It never got too testosterone-y.”

So there’s a lot of dancing?

“Oh, yeah! There’s a lot of dancing and singing!”

Well let’s transition from talking about this male stripper movie to talking about your marriage. [Both laugh.] How do you and Allison balance your busy schedules with traveling a lot and her coaching on Dancing With The Stars?

“It’s a constant work in process, to be quite honest. We are running through every open door that there is right now but we also have to keep our grasp firm on the importance of family first. Family comes first. Period. No matter what. So we constantly juggle that with all the things we’re tied into. We know that if there was ever any type of major conflict, if we had to choose, we already know the first choice we’d make.

We always say it takes a village too. We have a babysitter and family friends who help us and it’s a constant work in progress. But I think we’re doing really well so far!” 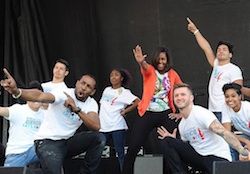 While she’s been on TV weekly with DWTS, you’ve also been featured quite a few times recently, such as dancing on The Ellen Show…

“The Ellen Show is incredible! Ellen DeGeneres is so generous and kind—and hilarious! So it’s always a good time!”

And Michelle Obama was on the show with you too!

“YEAH! That was incredible! I danced with the First Lady, you know? Wow!”

Are there any other projects you’re working on right now?

“Yes, Allison and I are both the Creative Directors of Revolution Dancewear… Allison will have some pieces coming out this spring most likely, which is going to be very exciting.”

And one last question – what’s something you want to do down the road that you’ve never had the opportunity to do yet?

“I want to continue to do acting but without dance attached. I want to have a regular role, whether on a TV series or in a movie.”

See tWitch on Season 12 of SYTYCD, which will premiere June 1. Catch him in Magic Mike XXL when it opens in theatres on July 1. Students can dance with him at 24Seven Dance Convention in Dallas on May 8-10 and Santa Clara on May 15-17. Plus, he’ll be teaching at BuildABeast Experience, at DancerPalooza’s Pool Party and KaMotion Intensives this summer.