Since 1940, American Ballet Theatre (ABT) has brought together some of the world’s leading dancers in exciting repertory that ranges from full-length classics to ballets by current and legendary choreographers. This season, ABT, led by Artistic Director Kevin McKenzie since 1992, continues that tradition in its 75th anniversary season, to be performed this May 11 through July 4 at the company’s home theater, The Metropolitan Opera House in New York City’s Lincoln Center. 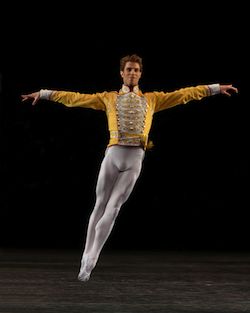 James Whiteside in ‘Theme and Variations’. Photo by Gene Schiavone.

The company will present the New York premiere of Alexei Ratmansky’s The Sleeping Beauty, after its debut in California this past March. Other returning classics include Giselle (first premiered on the company during ABT’s inaugural season in 1940), La Bayadère, Romeo and Juliet, Swan Lake and Cinderella. The company will also perform Lar Lubovitch’s Othello, set to music by Elliot Goldenthal, and a series of one-act ballets, including Michel Fokine’s Les Sylphides, Agnes De Mille’s Rodeo, Antony Tudor’s Pillar of Fire, Jerome Robbins’ Fancy Free, George Balanchine’s Theme and Variations and Tudor’s Jardin Aux Lilas (Lilac Garden).

ABT Principal Dancer James Whiteside, who joined ABT as a soloist in 2012 and was promoted to principal in 2013, says that although he hasn’t been with the company for much of its history, he is honored to perform during this momentous season.

“I’m proud to be part of a company with such a rich history, in drama as well as high art,” Whiteside says. “ABT’s story is so fascinating! ABT consistently rises to the occasion to provide one of the best experiences a ballet performance can offer.”

Whiteside is most looking forward to dancing Fancy Free, Rodeo, Othello, Theme and Variations and Romeo and Juliet.

“And that’s just to name a few!” he adds. “I’ll be a busy man. I’m enjoying sinking my teeth into a wide range of roles and characterizations that span ABT’s 75-year history.”

ABT Principal Dancer Isabella Boylston, who joined the ABT Studio Company in 2005 and the corps de ballet in 2007, says she grew up watching ABT ballerinas Julie Kent and Paloma Herrera, two dancers who make up the diverse palette of the company.

“I think what makes ABT unique is that it is and always has been a true melting pot,” Boylston says. “I love that there is such diversity in the styles and background of the individual dancers.” 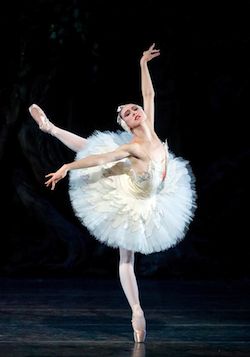 This season, Boylston is most looking forward to her reprisal as Giselle and also to dancing Aurora in Ratmansky’s The Sleeping Beauty.

The 75th anniversary season also hosts the farewell performances of long-time ABT ballerinas Paloma Herrera, Xiomara Reyes and Julie Kent, who will dance their final show with the company on May 27 (matinee), May 27 (evening) and June 20, respectively.

“All three are such incredible ballerinas,” Boylston comments. “Julie has been a mentor to me since I joined. I feel that I’ve learned so much about performing and being an artist from watching each of them. I think the company will feel very different when they are gone.”

“Ballet is such a short career,” Whiteside adds. “I can only imagine that it’s heartbreaking when that part of your life dies. A retirement performance is like a jubilant funeral that reminds people of all the good you’ve done for the art form, a legacy party, I suppose. I’ve had the privilege of dancing with all three of the retiring ballerinas, and I will miss them onstage greatly!”

“I believe that this season will be one for the ages,” Whiteside says, “so if you’re in New York City – heck, even if you’re not – get your buns up to the Met and witness some magic.”