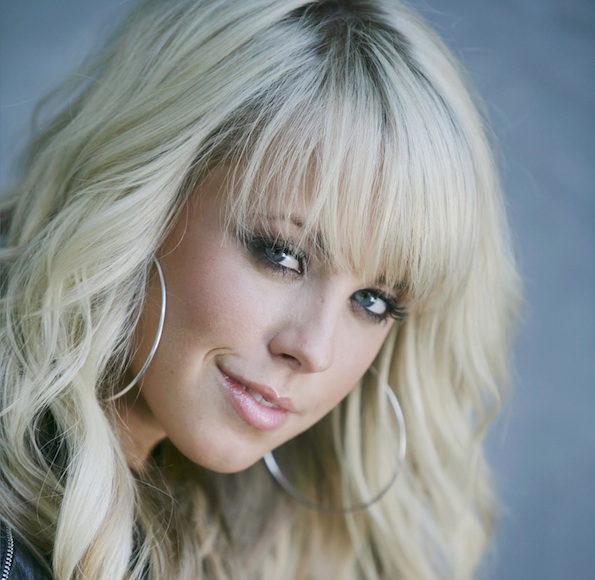 Known as one of the few dancers who made a successful crossover from So You Think You Can Dance (SYTYCD) to Dancing With the Stars (DWTS), seasoned competitor Chelsie Hightower is a household name to many familiar with the dance scene. This blonde bombshell garnered a spot for herself in SYTYCD’s Season Four Top 6 at age 18, received praise for her roles in Emmy-nominated pieces Bleeding Love by Tabitha and Napoleon and A Los Amigos by Dmitry Chaplin, accepted a personal invitation to partner celebrities on DWTS, performed with singer-songwriter Jewel, and received an Emmy nomination for the paso doble Malagueña that she co-choreographed with Derek Hough for DWTS Season 10.

However, many might not be familiar with her background as a national ballroom champion before she stole the spotlight on screen. Before she was even 16, her world was filled with rehearsals, fake tanning solution and expensive dresses. At only 14, her partner and her became the National Ten-Dance Champions, earning their spot on Team USA for the biggest competition in the world, the British Open in Blackpool, England.

These days, Hightower is as busy as ever. While she won’t be returning to DWTS this season, she will continue to perform and teach in venues across the nation, as well as launch new projects and continue her involvement with anti-sex trafficking organization Operation Underground Railroad (OUR.)

While recently preparing for an evening performance on the national Dancing Pros: Live Tour, Hightower chatted with Dance Informa in her dressing room about her background, her career and her advice for aspiring dancers. 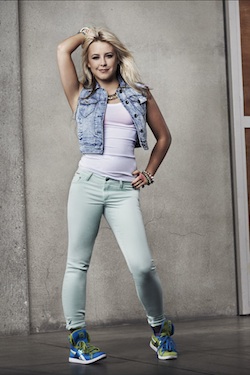 Chelsie Hightower models in a photoshoot for Reebok.

You’ve had such a successful career and you’re still only in your mid-twenties. But it didn’t always look like you were going to excel in ballroom when you were young. Why was that?

“I was incredibly shy when I was a little girl. It was hard for me to accept other people and for me to put myself in surroundings with new people. It was very intimidating for me.

So dancing was hard – not because I didn’t like dancing, I honestly didn’t know how I felt about it at first – but because the social aspect was really hard for me. So it wasn’t until I was nine and my brother did it with me at my elementary school that I started ballroom.

At first, I was very slow to learn the steps. I was the kid in class who would look around like ‘What the heck is going on?’ [Laughs.] Then I remember one of the boys who knew more steps took my hand and was like, ‘Follow Me.’ So I followed him. I didn’t know if I was good or not, but I knew I was able to follow really well. So he showed the director of the program and then the director paired us up. That gave me confidence that maybe I was better than I thought.”

“From there, it was a really rapid acceleration. I was nine when I started and by 11, I had won a national title! I went and trained in jazz and ballet and within a year was receiving scholarships in that realm. Then I went back to ballroom very seriously. I represented the United States in international competitions, being one of four couples for Team USA in Junior Blackpool.

Then I went through a few different partners and began teaching at 17. By 18, I was on So You Think You Can Dance… And the rest is public history.”

Who have been some of your main professional inspirations? 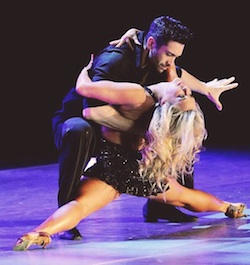 “Karina Smirnoff, who is in this show, is definitely one of them. She was one of the best dancers in the world at that time – I was only 14 – and she was so feminine and classy in the way that she danced. I would try and mimic that as best I could… Coincidentally, I later competed against her on TV, only four years later on Dancing With The Stars.

Another teacher is Shirley Ballas. She was very influential and inspirational to me.

But really, my inspiration was less any one idol and more so my peers, who really pushed me. I looked at them and they would inspire me and make me want to do better. Till this day, that is how I feel.”

It’s been seven years since you auditioned for SYTYCD at 18. Looking back, what do you think you learned at that time in your life?

“I learned so much! I think for me the highlight was just growing as a person. I think that if anyone were to look back and see what I was like as a little kid they would’ve never imagined that my professional career would be in front of people. So for me, that has been the most thrilling thing – being able to overcome those insecurities and overcome those challenges that I had.”

You were in SYTYCD pieces that were nominated for Emmy’s, like Bleeding Love. What was that like?

“It was incredibly exciting! I’d say that Bleeding Love has really gone down in So You Think You Can Dance history. It’s amazing to be a part of that legacy and to have people remember it. It’s quite exciting!” 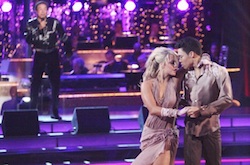 After seven seasons on DWTS, do you think you’ll be going back one day?

“I have quite a few projects I’m working on now… So we’ll see! Maybe down the road I’ll do it for one or two more seasons then see what happens after that. It’s such a great show and it really requires you to be at your absolute best and I love that.”

What are some other projects you’re working on right now?

“One is a dancewear line with Discount Dance. It will include items that you can wear on stage and in practice, but it will be primarily geared toward ballroom dancers. My main goal is to have the best fabric and the best fit while at the same time being fashionable. So it’s all about comfort and fashion, which is really what you want for dance.”

How’s the current Dancing Pros: Live Tour? How does it compare to other tours you’ve done?

“We started [this tour] in October and will wrap up in a few weeks. [The tour runs through April 19.] It’s different from the SYTYCD tour where you have 3,000 screaming 14-year-olds every single night. With that, you feel like a bit of a rockstar, whereas this is a little more traditional.

But it’s great doing theater like this because you can really explore what you’re dancing every single night. Every night you are doing the same thing so it’s your goal to keep it fresh and make it feel different every time. So you really get to explore more as a dancer and an artist, finding new ways to perform the same move and push it to a new level.” 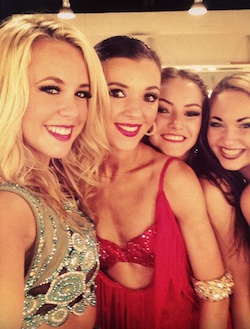 There is an interactive feature for viewers to vote on their favorite dancer? Do you like that?

“I do! I feel like it really gives the audience the feeling that they’re a part of the show and they have to pay attention because they’re deciding our fate.”

Something else you are now involved with is the nonprofit organization Operation Underground Railroad (OUR). Can you tell us more about this?

“Operation Underground Railroad is a charity that rescues girls from sex slavery. There is a multi-billion-dollar industry in sex trafficking and millions are affected worldwide.

What’s so amazing about this charity is that they’re actually taking action and getting the girls out of these situations themselves. They’re not just raising awareness of the problem; they’re doing something on the frontlines to deal with the issue.

So when they told me about their vision, their passion and their plan, it was something that was a no-brainer for me. I wanted to be involved and be able to help in any way possible.”

As you are performing across the country, working with OUR and launching many new projects, how do you keep your body in top condition?

“Food is the most important thing as far as being healthy and staying in shape. Food is number one. We tend to think that if we exercise and stay in shape and go to the gym then we’ll be in our best shape and lose weight. But ultimately, it’s really about the food. So in my daily life, although it’s hard on tour, I try to be conscious about the food I’m putting into my body – and not just fat content but other ingredients too. I actually have a protein that I keep with me at all times.

Chelsie Hightower with children rescued by Operation Underground Railroad in Haiti. Photo courtesy of OUR.

My biggest advice is to keep healthy food with you at all times because you aren’t always going to be able to control what food options are around you. If you’re prepared, you’ll never be in a position where you are forced to eat something less nutritious.

Other than food, I try to stay as active as possible by lifting weights six days a week, doing cardio three days a week and doing yoga or go hiking when I just need to try something new… I’m a fan of crosstraining for sure. I’ve done everything from Crossfit to yoga to tennis.”

Lastly, what is your advice to those dancers who started out training in ballet or another movement style but now want to get started in ballroom?

“Just go to a local dance studio and try it out! I’m actually coming out with an application at some point that will teach people how to dance. That’s such a great way to get started if you ask me – in the comfort of your own home, where you don’t feel like people are judging you. That way you can actually see if it’s something that you like to do and if you are willing to go a studio and get serious. Until that comes out though, it’s really all about going to a studio, finding a teacher you connect with and going for it.”

For more information on professional dancer and OUR advocate Chelsie Hightower, visit chelsiehightowerdance.com. She will be on tour with Dancing Pros: Live through April 19. To see dates and locations, head to www.dancingproslive.com.