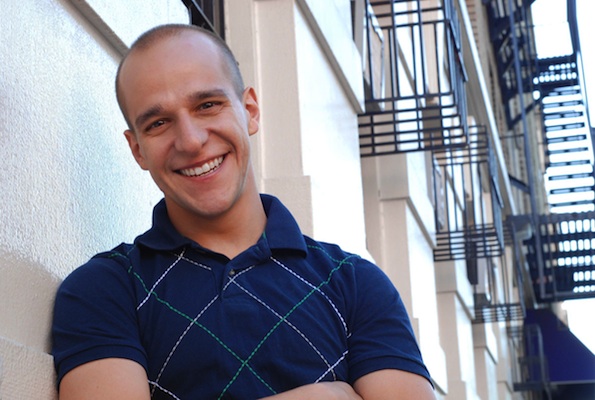 Amidst the foot traffic and the occasional sound of a motorcycle whipping by on the sunny Saturday morning, Kasprzak sat on a park bench and shared how he started dancing, what the highlights of his career have been thus far and advice for aspiring dancers looking to make it in the industry. Having only recently finished performing as a tap dancing clown in Germany – an experience he described as a “dream come true” – he also divulged what’s next…

Ryan, how did you get started dancing? I heard it had to do with a coin toss?!

“I started dancing around age 12 or 13 after my family had just moved to the suburbs of Chicago. I grew up playing lots of sports – baseball and soccer mostly – but my mom was really interested in me getting involved in theatre. At the time, Michael Jackson and MC Hammer were the coolest people on the planet too, so I was into their style.

So one day after my mom had been telling me I should try dance out for months, she found a free boys street dance class and she told me I should go try it out. At first I was hesitant and like, ‘Ah, no. That’s alright.’ But she wisely said, ‘Well, let’s flip a coin. If it comes up heads you’ll go to class and if it comes up tails we’ll never speak of it again.’ It came up heads and so I went to class. The teacher was amazing and she saw something in me so she actually put me on scholarship. I then started taking tap, jazz, ballet and everything… That’s how it all began… A flip of a coin has kind of changed my life.”

Do you remember a pivotal moment when you fell in love with tap?

“It was the first time I saw what I would say is real tap dancing. I was in 7th grade and I went to a show in downtown Detroit called the Paradise Theater Gala. My teacher, Jennifer Miller, invited me and my mom to go see the show and it was really the first time I saw proper hoofing.

Buster Brown was in that show, as well as Diane Walker and Van Porter. These were iconic hoofers and since it was pre-YouTube or any of that stuff I had never seen anything like that before. After the show they brought everyone up on stage to jam and I was amazed because it was something different, like music, which I had never realized before.

Then a year or a two later I had another memorable moment on my first trip to New York. Bring in ‘da Noise, Bring in ‘da Funk had just opened and I saw that three times in the course of the trip. Afterward I was really influenced by the rhythm tap style. I went on to study with Savion Glover and that really changed my perspective on tap dance.” 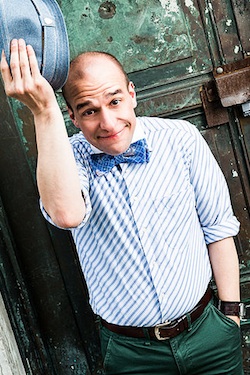 So when you did really start to focus on dance?

“I started out training in street dance (the 90s lingo for hip-hop) and then I later got really into jazz and tap. By the time I got to high school and I started taking it more seriously, I decided to take ballet and get some proper, foundational training. So I studied all of those in studio.

Then when I was in high school I went to this program called the Broadway Theatre Project in Florida that Ann Reinking founded… There I got interested in theatre dance and the Fosse style. I was lucky enough to study with Gwen Verdon before she passed away and Ben Vereen.

In between that, I would go to many tap festivals like the Chicago Human Rhythm Project or the St. Louis Tap Festival. That was often where the worlds met of theatre and dance. And it’s kind of been my specialty since then.”

Did you ever consider quitting dance and just focusing on theatre?

“In high school I got a little burnt out and I wasn’t really interested in dancing for a little while. So when I went to Marymount Manhattan College, I pursued a BFA in acting, not even in musical theatre.

While I was there I got roped into a physical theatre project where I learned mask work, puppeteering, improvisation, using instruments, mime and suzuki work. Then I started learning about these other physical forms of storytelling and when I combined that with my background in dance they came together naturally. I realized I could still be really specific with my storytelling while still really being able to dance.”

What would you consider your “big break”?

“My first professional job out of school was the National Tour for Fosse. It was amazing! Only six days after graduation and I was working on Fosse! It was incredible because we were nonstop, doing one-nighters all the time, sleeping on a bus and doing two shows a day. For one year we toured the States and for another year we toured Europe. We played in Paris for eight weeks with Ben Vereen as the headliner. It was truly incredible!

It was amazing getting to dance those steps, perform that style and do that material. Now looking back on it, I’m amazed because I only further appreciate the historical significance of the steps and the show… I feel privileged to carry this physical history in my body. It truly informs everything I do.

And a lot of the people I worked with on that tour are still some of my closest friends! Ricky Hinds, who is also teaching this week, and I were actually on that tour together. I was 22 and he was 21. It was our first professional gig and here we are 12 years later teaching together at DancerPalooza! Crazy!”

That’s so neat! And after that was when you tried out for So You Think You Can Dance, right?

“Yes! So You Think You Can Dance was such a fascinating experience because it is such a different world. I was really lucky in a sense because I got to go and try out with my brother, who also dances, and we got to have this bonding experience.”

What have been some of the other highlights of your career thus far? 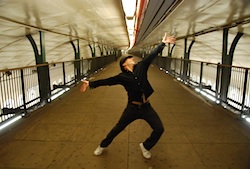 “Billy Elliot was great! I did two years on that as a dance captain and later as the associate resident choreographer. I really enjoyed that because I always wanted to get my hands dirty in a big show and to understand the blood and guts that it takes to run a big Broadway production and the mechanics of what it takes to keep it going. In addition to how dance heavy the show is, when you are part of the creative team you are always putting in and training new young boys. And that is a great challenge! I had a little experience to help me here from when I was dance captain for my second year of the Fosse tour, but it was really different overall because of how huge the show is. The logistics of maintaining all those dancers – the four main ballet boys, the two boys who play his friend, the 10 ballet girls and a whole ensemble – was tough! But I grew a lot.

Then Smash was also incredible! Getting to work in television is a whole other experience. The speed is so much faster. You don’t even get your script till nine days before you’re even shooting. Then your music doesn’t typically get chosen till three days before shooting. So that was different. Working with the head choreographer, Joshua Bergasse, was wonderful. He is one of the most brilliant and talented choreographers. He especially made that experience wonderful for me. It was a wild ride! [Laughs.]”

Did working on Smash change the way you choreograph?

“Yeah! Shooting for television is so different, you know? For dance especially you have these huge choreographic numbers that look completely different from a tiny frame. It really changed the way I think about choreography. That was cool because I don’t think everyone gets that experience coming from New York and the Broadway world!”

What are you working on now?

“I work with this company in New York called Parallel Exit, a physical comedy company that does a lot of old-fashioned vaudeville, slapstick comedy and tap-dancing numbers. We have this variety show that we’ve done in New York and throughout the country called Exit Stage Left and that show was paired with this German variety presenter called the GPO, which has six different venues all across Germany.

So our troupe went over there this year to do this comedy and music variety show, and the presenter added in circus acts. It started in January and is being presented in four-month legs. It runs through the end of summer 2015, playing a total of six different cities in Germany. I was there for the first leg earlier this year, performing in the northwest.

I also just finished working on two new full-length musicals that were presented at the New York Musical Festival. Those were really fun. 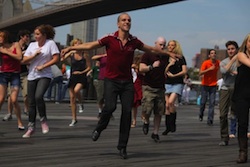 Soon I’m going back to New York. I’m doing a workshop of a new show called Bandstand that Andy Blankenbuehler is directing and choreographing. Then I’m getting married in October and shortly thereafter traveling to Africa for two weeks for my honeymoon.

In the new year, I’ll be directing and choreographing Once Upon A Mattress at my alma mater, Marymount Manhattan College. I’m really looking forward to that. I’ll be putting a 1920s, vaudeville spin on it. That will open in March.”

Wow! Congratulations! Looking back at your career, who are/were some of your role models? Who are you most inspired by?

“Definitely Gregory Hines. When I was young I got the chance to work with him and that’s like getting to work with the Michael Jordan of tap. The first time I met him was in a class he was leading. At the end of the class, he led an improvisation section. Next thing I know, I’m on the floor improvising with Gregory Hines, toe to toe. We’re trading eights. It was fantastic. And from then on he was always so warm to me, for years and years afterward… He knew he was my idol and I think he took ownership of that, realizing the importance of being a role model.”

Now you are someone that others look up to! Now knowing everything you do from your career, what advice would you give to those who are trying to break into the industry?

“I would say that the greatest thing anyone can accomplish, not just as a dancer, but as a person, is to know who you are and to be comfortable with that. And that is not an easy thing to do, but it is so important. You have to have faith in yourself and believe that a day will come when someone will be looking for exactly who you are. You have to trust yourself.

Now, I’m not saying you shouldn’t push yourself to the bounds of who you can be. But what I’m saying is that you should trust that who you are is enough.

It’s a fine line. Flexibility, by definition, is a willingness to change, to be adaptable. So you have to be that for sure. But you should be able to push yourself without losing the core of who you are. In the long run, that’s what makes you stand out.”

For more information on Ryan Kasprzak, head to www.ryankasprzak.com.