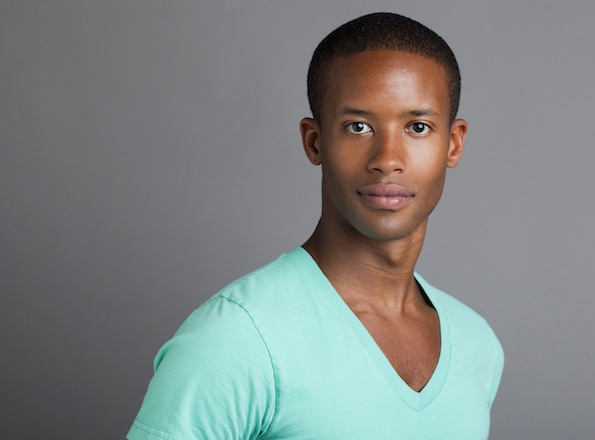 Thirty-year-old Jonathan Emanuell Alsberry was born and raised in Normal, Illinois – but for this professional dancer and choreographer, that’s by far the most normal thing about him. A dancer who abounds with joy, sass and enthusiasm, not to mention technical prowess, Alsberry has been dancing with various companies and projects for more than 10 years, splitting his time between Chicago and New York City.

Having worked with many renowned dancers and choreographers, including even the luminous and legendary Mikhail Baryshnikov, Alsberry is an experienced performer and an equally avid teacher and choreographer. After seeing him dance live in-person – I vividly remember his exuberant, whole-hearted performance in Lar Lubovitch’s Coltrane’s Favorite Things at Jacob’s Pillow Dance Festival in 2011 – it came as no shock to discover he basically learned to dance before he could even walk.

“My mother is a dancer and I honestly don’t ever remember not dancing,” Alsberry shared in a phone interview, laughing. “From before I could walk, she owned her own dance company and studio, so I was always going with her to the studio and watching class. That grew into me crawling around class, to me standing up and walking, and then beginning to dance. So I’ve always been dancing. I can’t ever remember a time when I wasn’t.” 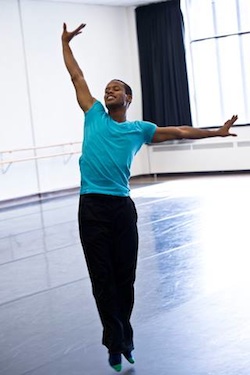 Jonathan rehearsing in the studio. Photo by Don Lee.

He joked that his first time in The Nutcracker was before he could even stand on his own two feet – being spun around in his mother’s arms during the party scene. Yet, once he was an independent mover, he was already beginning training with her at Agape Dance Center.

“I started with musical theatre, which was really rooted in tap, jazz and creative movement. Then when I turned nine I started going to the local ballet school, Twin Cities Ballet under the direction of Scottish Ballet dancer Alexander Bennett. I stayed there for many years, basically through high school. That’s where I got the core of my ballet training, the base,” he reminisced.

Once he reached high school, he relocated to Chicago to further his training at Chicago Academy of the Arts. While here, he fell in love with musical theatre, dreaming of moving to New York and starring in a dance-filled Broadway musical. This big-city dreaming led him to audition for the prestigious Juilliard School, where he was accepted.

“It was funny because when I auditioned I didn’t really know what Juilliard was,” Alsberry admitted. “I just wanted to go to New York and I had heard Juilliard was the best school to go to. In my mind, I was still focused on musical theatre at that point and so I thought I’d go to Juilliard to get further training in music and dance to then make it on Broadway. [Laughs.] That turned out very differently though.”

Once arriving at the dance division of Juilliard – a program that turned out dance stars like Paul Taylor, Lar Lubovitch, Robert Battle and Ohad Naharin – Alsberry was deeply influenced by many of his instructors. He started to focus on contemporary and to really explore and examine the complexities of the style.

“It was a choice I made to really delve into concert work for this time,” he said. “At Juilliard, being introduced to a bunch of choreographers both from abroad and America, I realized that there was a huge world there. Before that, I didn’t even know what European contemporary dance was doing – choreographers like William Forsythe, Ohad Naharin or Nacho Duato. So the whole concert dance world really opened up to me once I got to New York.” 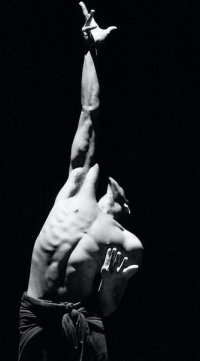 He lists a host of instructors who really left an impression on him, such as Laura Glenn, Linda Kent, Banu Ogan, Alphonse Poulin and Lawrence Rhodes, who is now the director of the dance division. He specifically acknowledged Stephen Pier, a ballet instructor whom he had first met at a summer program with Perry-Mansfield [Performing Arts School and Camp] in Colorado and who is now directing The Hartt School.

“I am such an academic when it comes to dance. All the teachers really had a huge, huge impact on me. There’s not one teacher that I don’t pull something from when I dance and teach today,” he emphasized.

Before even graduating Juilliard, Alsberry was hired as a soloist at the Metropolitan Opera, where he danced for five years in productions like Aida, Samson and Delilah and La Gioconda, at one point even getting to work with notable ballet choreographer Christopher Wheeldon.

“One of my favorite things ever is to dance to live music. There is truly nothing better than getting to perform with musicians,” Alsberry declared. “Doing opera is one my favorite experiences because there is this giant orchestra there in this giant opera house and the sets are so fun and the costumes are exquisite. In some ways, those experiences have helped to satisfy my Broadway kick. While I don’t get to sing, I get to be around these extremely talented voices.”

Alsberry has also performed with the Lyric Opera of Chicago in a few productions. He said one of his most memorable moments was while dancing in Samson and Delilah at the MET. “Plácido Domingo was singing the role of Samson and I had to jump on his back at one point and bite his ear! It was quite crazy!” he recalled.

Yet, by far, the area in which Alsberry has had the most prolific success is in the contemporary dance arena. One of his richest experiences was with in-demand Canadian choreographer Aszure Barton. He met her while still at Juilliard and was handpicked as one of 10 dancers for a project she was doing in conjunction with Mikhail Baryshnikov for Hell’s Kitchen Dance. 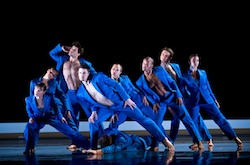 “As we made a new work together, it became clear almost immediately that we worked extremely well together. She works lightning fast, in terms of making work. She’s a choreographer who makes a phrase and before you even do the phrase all the way through, she’s already changed it and shifted it to something completely different. She’s always changing details, from musicality, to where the eyes are directed, to where the pinky is, etc. I love working with that detail and at that speed. So that was an immediate fit right away. I worked with her and toured with Baryshnikov for two years,” Alsberry said.

During that time, Barton hired him to dance with her company, Aszure Barton & Artists. Now, about eight years later, he is the rehearsal director and her personal choreographic assistant. In the last year or so, he’s been an intimate part of three of her commissioned works, working with her on pieces for Alvin Ailey American Dance Theater, Hubbard Street Dance Chicago and Germany’s Bayerisches Staatsballett.

In addition to dancing for companies such as Momenta, Luna Negra Dance Theater, Pier Group and Eisenhower Dance for stints, Alsberry has been a dedicated company member of the Lar Lubovitch Dance Company and Daniel Gwirtzman Dance Company.

“It’s really exciting, because between Lar Lubovitch, Aszure Barton and Daniel Gwirtzman, I’ve been able to dance with three very different kinds of choreographers. They are all on completely different areas of the dance spectrum, in terms of how they use the body and how they create. But the one thing they all have in common is their dedication to what it is that they do – creation. For each of them, that is paramount,” he said. 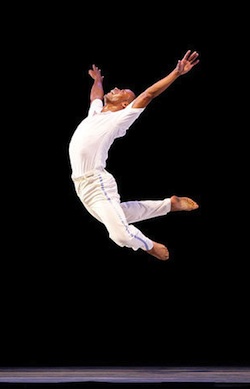 Jonathan performing with the Lar Lubovitch Dance Company in 2008. Photo by Jennifer Taylor for The New York Times.

With all these company contracts and gigs, it makes one wonder how Alsberry juggles it all. Alsberry laughs and says, “the best explanation for that is God!”

He expounded, “Somehow it has all magically worked out. The schedules have been able to line up without much conflict for some time now… It’s not anything of my own doing at all. The way it’s been able to work out has been such a blessing.”

In fact, Alsberry even finds time to teach numerous times each year. One place he often returns to is Chicago Academy of the Arts. Director Randy Duncan, who is widely known for choreographing the film Save the Last Dance, is a mentor to Alsberry.

“He is my ‘dance dad’ if you will,” he said. “I always go back there every year now to work with his students because I feel it’s important to give back to those who helped get you where you are. I teach and choreograph, and that’s where most of my choreography is shown.”

He also produces short dance films for Kuntemporary Dance Theater, his self-described “YouTube dance company.” This is where his sassy side is perhaps best expressed as his fellow dancers move and shake to popular music with attitude and oomph. He films, edits and posts it all on his own. One day he hopes to expand this project into something bigger.

“I’d love to eventually bring the audience into the experience more, do pop-up theatre in the street somewhere, film it, do real-time editing and then have a showing of it sometime before or during the next event like that,” he said.

For this dancer who has been called a “silken wonder” by The Chicago Tribune and has recently been dubbed “radiant” by The New York Times, there seems to be nothing out of reach. Yet, his feet remain grounded and his heart humble. When asked how it feels to possibly be jetting off to France later this year for another opportunity to work with Aszure Barton, or to be working with award-winning choreographer Lar Lubovitch, he just focuses on how blessed he is to have these opportunities. 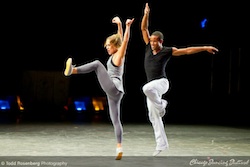 “I believe that dance is a gift from God. It’s not something I possess and have control over,” he explained. “It’s an incredibly sacred gift that’s been given to me and I have an obligation to honor that… The joy, the pain and the love which goes into it is all in celebration of this gift that has carried me through my whole life. It’s been an amazing ride and I know that there is so much more to be done and shared with the world.”

While he admits that there are dreams of dancing on Broadway, and directing his own school or company, Alsberry also acknowledges that he doesn’t want to miss the present moment.

“It’s just that I have no idea what the Lord has in store for me,” he disclosed. “I don’t want to dictate it or get too many plans. I just know that His way is The Way. I just go with the flow with the hope to walk in His will… My biggest plan for the future is to continue on the path that I’m on because it has proven to be a beautiful one thus far.”

Perhaps we should all let Alsberry’s take on life and dance serve as reminder – dance is the highest form of expression, and each opportunity to move is an act of freedom, celebration and life.