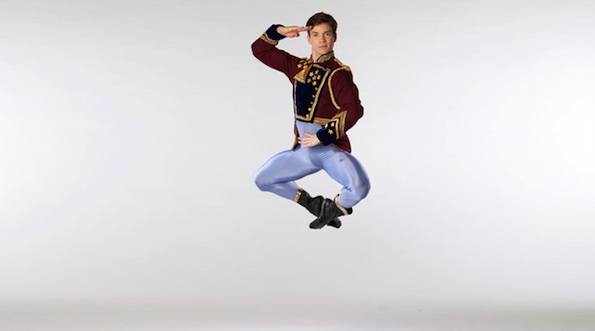 Most Americans celebrate the 4th of July with hot dogs, apple pie and fireworks… But really, what better way is there to celebrate America’s birthday than with dance? Dance Informa has collected a few famous patriotic performances to help you get in the spirit of Independence Day.

1) George Balanchine choreographed Stars and Stripes on the New York City Ballet in 1958. The piece, which lasts about 28 minutes and is divided into four sections, is set to the music of John Philip Sousa. Stars and Stripes illustrates all things “4th of July” with the dancers baton-twirling, marching and even bearing rifles! This clip is from the fourth campaign of Stars and Stripes, a virtuosic pas de deux between the “Liberty Bell” and “El Capitan.” You’ll probably recognize this piece from a scene in the iconic dance film Center Stage.

2) For his musical revue Dancin’, Bob Fosse choreographed a collection of Americana pieces in Act III, including Dixie, When Johnny Comes Marching Home, Rally Around the Flag, The Stars and Stripes Forever and Yankee Doodle Dandy. Dancin’ won Fosse the Tony and Drama Desk Awards for Best Choreography in 1978. The Broadway company of Dancin’ performed these patriotic pieces for Bob Hope’s 76th birthday, a USO-type show on board the USS Iwo Jima in 1979. While not much video footage exists of these pieces, the Verdon Fosse Estate (under the direction of Nicole Fosse) is working to research, reconstruct and archive these dances to preserve them for future generations of dancers. Here is an old television commercial for Dancin’:

3) Known as “America’s Sweethearts,” the Dallas Cowboys Cheerleaders often perform for American troops stationed overseas. Here is a clip from their visit to US Army soldiers in Korea.

5) Besides the Radio City Christmas Spectacular, the Rockettes perform throughout the year at various events and celebrations. In 2001, they performed Parade, an all-American tap dance, at George W. Bush’s Presidential Inauguration. Here is a clip of dancers from the 2011 Rockette Summer Intensive who performed the piece in their final showcase.

6) Competitors Sasha Mallory and Alexander Forst performed a memorable piece on Season 8 of So You Think You Can Dance. NappyTabs created the hip-hop routine “Coming Home” about a soldier reuniting with his loved one after coming home from war.

7) Former football player Hines Ward and his partner Kym Johnson performed a rumba routine to “Proud to be an American” during the 2011 season of Dancing with the Stars. The pair scored a high score of 27 out of 30 for their patriotic duet on the competition’s “American Night.”

8) In Season 5 of Glee, the New Directions travel to Hollywood for Nationals. The club dedicates their performance of Neil Diamond’s “America” to their late co-director, Finn.

Photo (top): The Washington Ballet’s Jonathan Jordan in Stars and Stripes. Photo by Brianne Bland.
All videos sourced on youTube.