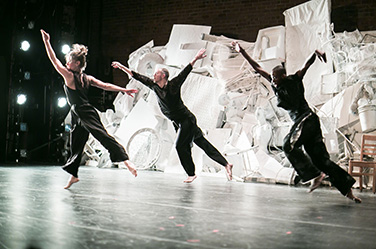 The Association of Performing Arts Presenters (APAP) claims its valiant monopoly over the New York City performance world every January. Whether a show is exclusively tied to APAP or not, the heightened awareness alone means a non-stop, full throttle showing of the best dance performances from the past year. It also means whether you are a performer or requisite performance-goer, you will not be bored. One of these showings took place at NYU’s Skirball Center as a part of the Dance Gotham series, presented by FOCUS Dance. FOCUS is an initiative committed to presenting the work of American choreographers, both domestically and abroad. I attended the performance on Sunday, January 12, which showcased works from David Dorfman Dance, Gregory Dolbashian (for Hubbard Street 2), Dusan Tynek Dance Theatre, and LeeSaar The Company (Lee Sher and Saar Harrari).

“Left, back…back a touch,” the choreographer-performer David Dorfman spoke into a microphone. His instructional language—for the receiver of the instructions we cannot see—morphed into memory as he continued: “My dad left…he came back.” Come, and Back Again is a dance work that is highly nostalgic while also confronting mortality. I have not seen many choreographers who are able to so powerfully blend highly personal narratives with impossibly visceral movement, but Dorfman’s style is built up in a way that both forces are equally potent. He is a storyteller, even if the stories may sometimes come in bits and pieces. In fact, the entire work was made up of interrelated sections. A flood of movement rushed the stage in bounding steps, high kicks, and endless spins and worked to punctuate Dorfman’s storytelling. The dancing cut through the space like a violent stream of water—concentrated and kinetic. The equally raucous band, recounting rock and roll in the brand of Smoke and Patti Smith, complemented this flurry. Unsurprisingly, the piece slowed itself down—nearly tiring itself out—as performer Jenna Riegel explained to us our “love calculation” in a tender monologue and there was a friendly game of follow the leader between Dorfman and his troupe. This excerpt, drawn from the full piece that premiered at the Brooklyn Academy of Music this past October, hit all of the emotional highs and lows as its longer version but still left me wanting more. Dorfman’s return to thoughts about mortality closed the work in a phone call to his wife, fellow choreographer Lisa Race, where he promised to “clean up my mess.” Unfinished business and impending expiration left me with the impression that this work may always leave me wanting more.

Where Dorfman’s work left me wanting more, Gregory Dolbashian may have offered me too much. For By the skin of my teeth the exciting movers of Hubbard Street 2 created an ever-changing pulse of action that jutted itself in and out of the space. The duet partnering was easily the centerpiece of this action, with an emphasis on neck grabs and linking between head and hands. If that sounds dangerous, it should. The performers constantly whipped themselves into low hinges and high leg extensions, stopping on a dime to burn the imprint of their physicality into your watchful eye. As the piece carried on, the performers seemed to build in aggression that felt a tad misguided in a teenage angst sort of way. Whether it was over-performing or something more directed, the physicality of Dolbashian’s calculatedly risky movement kindly overshadowed any performative distractions. The work had a go-for-broke attitude that Dolbashian has made his individual staple and, though it may be too dense for my taste at times, you cannot deny that any performer trying to tackle his dynamic movement is completely enthralling to watch.

Dusan Tynek’s Transparent Walls is impressive in its concern with formal movement and equally formal composition. Structuring a work like this one is akin to creating your own labyrinthine maze and trying to navigate your way through it—deliberate in its complexity yet organized in its structure. Aided with Roderick Murray’s lighting design, the most compelling part of this structure was the black void set on the upstage periphery. The dancers were constantly jumping, twirling, and darting in and out of this blackened area, creating the effect that the stage stretched for miles past what we could see in front of us. This black void never slowed or halted Tynek’s driving movement. Each performer had a deliberate attack that made the constant moving all the more dynamic, especially when set against a central duet (the gorgeous Ann Chiaverini and Tim Ward). The duet allowed us to have a focus against the flurry of action, working as a pillar of stability against the chaos. However, even the strength of this statuesque duet got sucked into the void eventually—whether it was to get lost or to continue on, we may never know.

The final work, Princes Crocodile, was from the intrepid Israeli duo of Lee Sher and Saar Harari, or LeeSaar. Donning black and white long-sleeve leotards, the seven female performers were part femme bot, part ingénue. Beginning with an exciting solo from Hsin-Yi Hsiang, we saw the luscious confines of the world we are about to enter. She extended out in a large yawn only to retract into a low sunken squat with compact force. I don’t know how someone can embody so many extremes at once. The pelvis-driven movement allowed high legs to fling out from hipbones and a motif of thrusting that seems to radiate from the inside out. There was also a very suggestive element to all of this, with the performers constantly looking out with a flirtatious gaze. My favorite part of the piece was what I deem the “deconstructed dance party,” where all of the performers were clumped onstage enacting a slowed down, fragmented rendition of what you would find on the dance floor at a family member’s wedding. It was awkward and disjointed, but entirely engrossing at the same time.