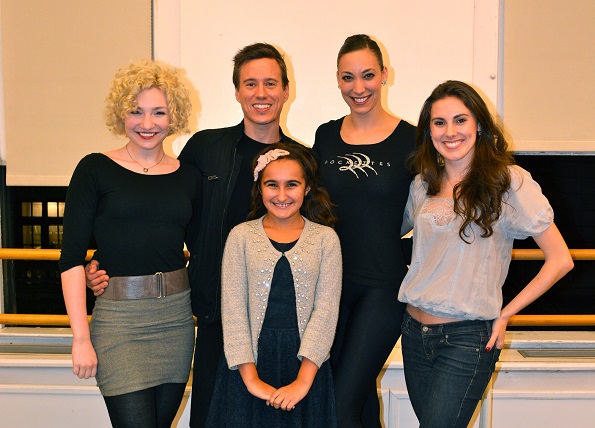 As part of the School at Steps’ Complete Dancer Series, School Director Kate Thomas led a panel discussion called “Ask the Pros,” during which four high-level performers discussed their pathway to success and took a few answers from the crowd. The crowd consisted primarily of parents and their bonbon sized little dancers. The purpose of the series is to educate, as well as to train, because, as Ms. Thomas explained, a dance career can’t happen just through dance classes.

The guest panel consisted of Paloma Garcia-Lee, Kurt Froman, Erin Kernion and Tiler Peck who shared their stories with the eager crowd:

Paloma Garcia-Lee was the first speaker. Paloma’s claim to fame as a Broadway performer was Kathleen Marshall’s Nice Work if You Can Get It, and both the tour and Broadway productions of Phantom of the Opera. She was homeschooled by performer parents and grew up taking classes in New York City, becoming a firm believer that ballet is a dancer’s best foundation. She went to high school at North Carolina School of the Arts where performing in West Side Story opened her eyes to the theater world. She received her major roles through non-union open call auditions, wherein one must wait for hours and still might not be seen.

Paloma recommends practicing “audition amnesia,” or the strategy to go in, do your best, leave and forget about it. You might book one in 100 auditions if you are lucky, but it’s not personal. You shouldn’t feel discouraged by the many, many times you hear “no” or nothing at all, because you might actually get a call back even months after the audition, like Paloma did – she didn’t hear back about Phantom of the Opera for four months! Keep auditioning always (she auditions five or six days a week), do stuff for free, take part in workshops, work with your friends, become well-rounded, believe in yourself and always take classes to always be ready and forever improve. You never reach “it.”

The second speaker was Kurt Froman, known for his work with both New York City Ballet and Broadway shows such as James and Movin’ Out. Like Paloma, he also had performer parents and, when his parents split, his mother put both him and his twin brother in ballet classes at his sister’s studio, just to spite their father. Talent was expected in his family, so when they wanted to go see The Nutcracker, his mom suggested they instead audition for it.  That was the first time they saw pas de deux and were enthralled, though they didn’t care much for ballet class. At age 14, they weren’t sure if they would continue, but then they saw George Balanchine’s Allegro Brillante and how jazzy ballet could be so they immersed themselves in it.

Ballet was the hardest thing they had ever done so they were drawn to it.  At age 15, they attended the School of American Ballet summer program and could have stayed for the full program but their father convinced them to graduate from their magnet school at home. They did, and joined NYCB after graduation, dancing from 10 a.m. to 6 p.m. everyday, plus performing for 40 weeks a year. Kurt thought he would be there his entire career. After about seven years, at age 26, he felt old and he noticed the older company dancers who weren’t principals seemed bitter. He was called, auditioned and was chosen for Twyla Tharp’s Movin’ Out, which was a total culture shock. Where ballet was glamorous, Broadway was free and sensual. He felt kinetic power. Instead of making pictures and presentations it all blended, was very pedestrian, and took his blinders off. He became a performer and not just a ballet dancer.

As the window of age closes, he gets more and more greedy to want to do it all. Even at his caliber, he still does hundreds of auditions and only books a few. Outside of a company, you become your own boss. Misfortune became a gateway to teaching for him. He was injured when he was called to be a part of Tharp’s next show, and in his disillusionment he contacted an old friend Benjamin Millepied. After working with the dancers on Black Swan, he further developed his skills and became choreographer and teacher for the show Billy Elliot. Plus, he has done numerous TV shows and films, and will next serve as dance captain and perform in Christopher Wheeldon’s American in Paris.

Erin Kernion represented the Radio City Music Hall Rockettes. She recalled that her mother had been a ballet dancer. She knew she didn’t have perfect attributes for a ballerina so she gravitated towards tap and jazz. As a taller woman, she set her sights on the Rockettes. She did not make it past the first cut the first time she auditioned. Not long after, she attended a workshop with a friend and accidentally auditioned for and booked a cruise ship contract. When the contract ended, she attended the Rockette intensive so she would know what she was doing the next time she auditioned. Then she was asked back to the cruise ship and completed another contract. Afterward, she auditioned for the Rockettes again and made it to the second day of the two-day process, performing jazz, kickline and tap routines three people at a time. She didn’t get it but those administrators knew her name by the next time she auditioned, and that third time she got in. She knew she had an attainable goal, she took the administrators’ corrections and worked on them to improve her technique, and she kept pushing for her goal.

With the Rockettes, she rehearses six hours a day, six days a week from late September to November. Tech lasts eight hours a day, and then they start performing 16 shows per week per cast. They get one day off per week, which means they have four shows on one day per week to cover for the other cast. She takes a nap and has a snack between every show. The show is different every year. She stays busy year around with off-season appearances on TV and at various events. She also teaches Pilates when she has spare time.

The final panelist was Tiler Peck, currently a principal dancer with New York City Ballet. As with the others, she had dance in her blood and grew up in her mother’s studio doing all styles of dance. At first, she hated ballet, but later she came to see it as the foundation for other styles of dance. At age nine, she played Clara in a California production of the Radio City Music Hall Christmas Spectacular. She had an agent. At age 11, she got a role in Broadway’s The Music Man and moved to NYC with her grandmother. She didn’t want to lose her dance technique so she auditioned and danced at School of American Ballet during the day and performed at night. There, she saw The Nutcracker and knew that was what she wanted.

So, Tiler returned to SAB for summer programs and moved to the full-time program at age 14. At age 15, she was an apprentice with NYCB and a full corps member by age 16, principal by 19. She loved school and takes courses at Fordham University whenever her schedule allows. She has far more free time as a principal, performing four times per week, than she did in the corps, which performs in multiple ballets every night. She always reads her reviews but she doesn’t take them negatively. Instead, she figures out what made them think how they did so that she can continually improve.

Tiler agrees with the three previous panelists that you never meet your potential and must always strive to attain something better in yourself. While in the corps, she believes she did too much too young and suffered injuries doing multiple roles per night. She knew she was due for a promotion but she needed time off for a stress fracture in her spine to heal. So, along with her promotion came a break!  She stressed that you have to learn how to take care of your body: eat right, hydrate, rest and warm-up (which you’ll need to do more as you get older). Be nice to your body because it does matter. She also stresses variety and, in fact, will be returning to Broadway next year. She also happens to have met her fiancé in a jazz class at Steps.

Q & A from the audience – find out a little more about these amazing artists:

What is your pre-show routine?
Paloma: Get on stage 15 minutes early, feel the energy change, relax and stretch.
Kurt: Get to the theater very early. Do a slow warm-up. Then get on stage to feel calm.
Erin: Get to the theater 1.5 hours early, always warm-up, at five-minute call get into the wings, say hello to everyone and do two kicks.
Tiler: Follow superstitions and spend time picking out pointe shoes the night before. I get to theater two hours early and warm-up.

How do you budget your finances?
Paloma: Don’t waste your money. Even when you are in a good gig, save because you will eventually be between shows and need it. Give yourself constant reminders. Learn by living it.
Kurt: Gigs are unpredictable so save, prioritize and live within your means.
Erin: Have a non-dance skill, like Pilates, so you can work even if you are between gigs or injured. Find guest teaching jobs.
Tiler: Plan for your post-dance career; keep your options open in case things change.

Do you still get stage fright?
Paloma: Even after thousands of performances of the same show, I still get psyched out and forget a step or a line. I’m still nervous for auditions and new things. You will always be fine.
Kurt: I get excited rather than nervous at shows. I sometimes feel sick at auditions but I try to use “power poses,” a method focused on keeping my arms open or up, never crossing my arms.
Erin: Especially on opening night I still gets nervous, but keep it to yourself so you don’t make others nervous.
Tiler: As a kid, I was more carefree. As I get older, I have more experience and have more to compare herself to. But whatever happens, happens; just go out and enjoy it.

How do you cover up your mistakes?
Paloma: No show goes perfectly. Don’t let it show on your face, keep going, make up new words or moves until your memory kicks in. Audiences won’t notice.
Kurt: It’s live art, a moment in time. We can have happy accidents too.
Erin: Do not let it get to you.
Tiler: Audiences would rather see someone go for it than play it safe.
Kurt: You are also getting paid to salvage your performance if something does go wrong.

How do you maintain friendly competition?
Paloma: Competition goes two ways. You can be competitive and supportive. Remove your ego. Do your work. If it’s with your partner, talk. Drama stays off the stage.
Kurt: It takes more energy to be angry. It takes energy away from you.
Erin: There is an unspoken rule: show up nice. Spread a precedent of kindness, it is infectious. Go to work with your friends (make them your friends).
Tiler: There is lots of competition in ballet companies. Don’t compare yourself to others, it doesn’t help you become a better dancer. You have to work with these dancers (she still has to partner with her ex-boyfriend!).