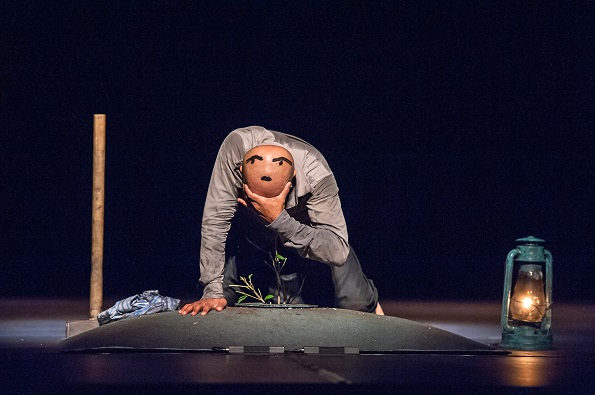 The concept of home is at once singular and universal for all individuals. It is rooted in ideas of place, identity, and spirit that all at once define individuality while offering a base for commonality. This duality is why I felt both mystified and well acquainted with Akram Khan’s evening-length solo, DESH.

The solo, in its U.S. premiere, was presented as a part of Lincoln Center’s White Light Festival at the Rose Theater on November 6th and 7th. DESH, which means “homeland” in Bengali, draws from Khan’s own duality: his understanding of his Bangladeshi heritage with his current life in Britain, where he lives and creates his dance works. It not only illuminates a cultural disparity, but one that pits nature to technology; youth to aging; legacy to ephemera; and makes for a completely engaging performance. 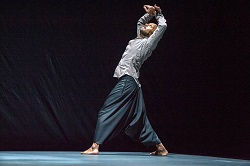 The solo begins with Khan, ax in hand, approaching a dirt mound rooted center stage. It is unclear whether his intent is to nurture or destroy. Similarly, the intent behind the force of his swing is with a brute physicality that could both camouflage or unearth. This confluence of efforts was not as confusing as it seems. Rather, it proved Khan’s ever-changing points of reference can materialize in various ways. When he explodes into whirling dervish turns at breakneck speed and highly articulate gestures, the industrial sounds of an urban mecca resound, and I relish watching in this moment of tension release.

In a wonderfully crafted moment of pantomime and theatrical effect, Khan does a solo dance with his face to the ground, revealing a bald head with a face painted on top. As he cuts through the space with a ferocity that makes me fear for the air, the sweat gathers on this painted figure. A small tear runs down this “face” and, while it could be a product of perspiration, I like to think of it as a symbol of Khan’s ancestral looming. Again, my questions of the duality of this moment persist: tear of joy or sadness?

I take my own interpretations and appreciations with Khan’s work with me after this particular performance, but DESH is an obvious brainchild of personal experience. Khan’s movement—quick-fire and relentlessly kinetic—is enthralling to watch. His one body on the stage had the force of an entire troupe. Additionally, the immersive video work by Tim Yip was absolutely heroic, trapping Khan in his own mythological stories about growing old and giving back. Swaths of tree branches and forest creatures diffuse the otherwise conventional stage space. I am transported not to Bangladesh or Britain, but a third dimension of this world entirely. That third entity may not be a place Khan calls home, but it is one I would like to live in for a while.