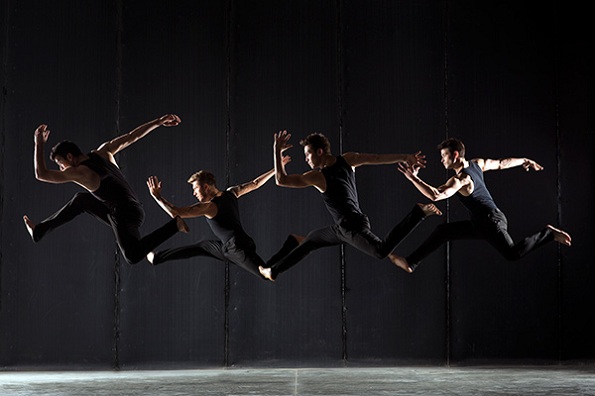 With big dreams and big hearts, Travis Wall, Nick Lazzarini, Teddy Forance, and Kyle Robinson took on the greatest challenge of their careers last year when they decided to combine their artistic efforts and talents to create Shaping Sound—a new, Los Angeles-based contemporary dance company that melds together different aesthetics of movement and choreographic voices. The creation and debut performance of the company were chronicled in an Oxygen original series called “All the Right Moves” in 2012. Now, Shaping Sound is ramping things up with a thirteen-city national tour presented by Break the Floor Productions, LLC.

When the cameras stopped rolling

“Having our own company and a television show that followed our story was phenomenal,” says Forance about season one of All the Right Moves. He believes this platform exposed the company and their creative process to both the dance community and mainstream culture, opening them up to numerous opportunities they might not have had otherwise—such as this tour, which was buzzed about at the end of season one.

The four friends learned a lot from their experiences on the show, and Lazzarini commented they have all since grown as “competitors, teachers, students and friends.” After the television show’s finale, the four shifted their focus to this first tour, and initially, spent a lot of time developing its concept with their production company. “We had to think about what we wanted to do, where we wanted to go, when we would do it, and how we would pay for it,” says Wall about the obstacles they had to tackle before bringing dancers into the picture. 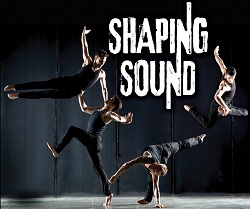 The show: what’s in a dream?

So, what can be expected this time from the creative minds of Shaping Sound?

Forance promises lots of fun and whimsy. The show’s concept is inspired by a quote from the original Peter Pan book—“You know that place between sleep and awake, the place where you can still remember dreaming? That’s where I’ll always love you. That’s where I’ll be waiting. ”

Blurring the lines between dream and reality, it is an imaginative exploration of what happens in dreams—a seemingly fitting idea to evolve from four big dreamers. “This new creation is a wild roller coaster in a dream world of love and fantasy,” says Forance. “The music is powerful and I believe we will surprise our audiences with our range of music and movement styles.”

With a roster of fourteen dancers, fans of All the Right Moves will recognize some familiar names, including Jaimie Goodwin, Channing Cooke, Alexa Anderson, and Matthew Peacock, among others. But there are also several fresh faces joining the company on this tour, making for a diverse and dynamic cast.

“This is the most creative work environment I’ve ever been in,” says Lazzarini of the company dancers hitting the road with him later this month. Forance also notes that Shaping Sound is the first contemporary dance company to be comprised primarily of dancers from the competition circuit.

In each city, a workshop taught in the style of Shaping Sound will be held before every show. “The idea behind the workshops is that you get a chance to warm up and dance with the company members,” says Robinson. Wall, Lazzarini, Forance, and Robinson will be at each workshop, rotating who teaches the warm up and choreography section. Attendees learn actual choreography from the show, getting the rare opportunity to “experience our movement firsthand before viewing it that night,” says Robinson.

The workshops are available to advanced dancers ages thirteen and up. Robinson assures that the four of them won’t just dole out combinations robotically, but will be out in the crowd, dishing out tailored technical corrections and helping the attending dancers discover a deeper understanding of Shaping Sound’s movement concepts. These types of educational experiences are an integral part of the company’s mission. Robinson explains that the ultimate goal is about more than just putting on a great dance show and says, “to inspire young talent by doing what we love is the best job in the world.”

Wall hopes this will be the first of many tours for Shaping Sound. He’d like to take the company on the road every year and hopes to eventually tour the company to Europe, exposing the world to its unique vision. And while they hope to some day provide full-season dancer contracts, for now, Shaping Sound remains a project-based company. This gives Wall, Forance, Lazzarini, Robinson, and the rest of the company members the flexibility to pursue their personal careers in conjunction with Shaping Sound’s progression—the beauty of the commercial dance world is a dancer’s freedom to chase a vast variety of professional avenues and Wall wants to maintain that for the present.

As more exciting ventures evolve for Shaping Sound, Wall continues to hone his choreographic skills by working in multiple mediums like movies and Broadway. “Sky’s the limit,” he says—and with this type of momentum the artistic possibilities are bountiful.

The 13-city tour kicks off with two mid-May performances in Los Angeles and hits up cities across the continent, ending in New York City on June 17. Those interested in attending one of the workshops can register on the company’s website—spaces are limited.