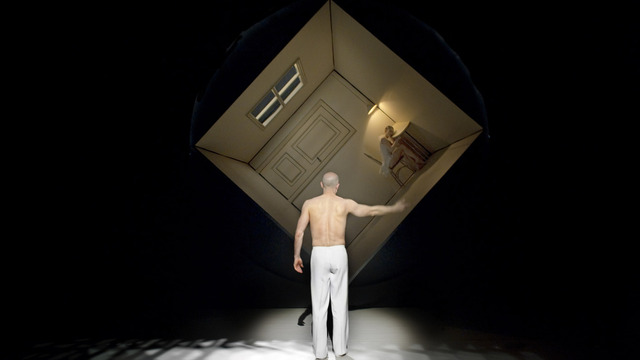 Presented by the Joyce Theater Foundation

For its performances at Lincoln Center, Nederlands Dans Theater presented Sehnsucht and Schmetterling, both choreographed by the company’s resident choreographers Sol León and Paul Lightfoot, who have been choreographing together since 1989. I have seen León and Lightfoot’s work before, as well as older repertoire of NDT, and the work I saw this time was quite different from what I’ve previously experienced. As a dancer, I don’t know that my eye was fulfilled from this performance. However, as a human, as someone who experiences social intricacies, shares history, and feels intensely, I was thrilled by the two pieces presented on this evening’s program.

Sehnsucht involves a man in white, a man in black and a woman in white as a couple, a corps of men and women in black, and a large room holding the couple that floats over the middle of the stage and rotates. As the man in white dances alone on stage, the couple appears and starts to play out what seems to be a troubled relationship while shifting and leaning on the various surfaces of the room; only on one occasion does the man in white approach the room to take the woman overhead and over the borders of her box before returning her without further acknowledgement.

In the second part of the piece, the man in black departs from the room, and the room disappears as a corps, all in black, takes to the stage with the man in white left glaringly different from the rest. Here, with the enormous stage at their disposal, the dancers charge through brilliantly expansive movement with a clearly visible root in classical steps taken into the contemporary realm for a precise, authoritative effect. At a certain point there is a shift: subtly but determinedly the man in white appears to take over the subconsciousness of the corps, bringing the bold dancers under his reign with a quiet power. At the end of this thunderous section filled with massive leaps and fast-paced synchronicity, the man in black emerges, only to seemingly be shut out from those who bear his likeness.

In the third part, we return to the initial scene. The man in black returns to the room where the dance is slightly more reserved, the woman having distanced herself and eventually leaving the room herself before the man in black leaves once again; all that remains is the man in white, alone. Sehnsucht is not a piece about dance; we are not watching this because we like dance and it will not make us fall in love with the very steps of dance. This piece was about something, these men, this woman, and the separation of forces. Who is this man in white? Does he represent the woman, changing her mind about the man in black? Is he something about the woman within the man in black’s consciousness? Is everything we see behind and around him all in his mind? The question mark is made even stronger as the man in white stays on stage in front of the curtain while we break into intermission. Eventually, about halfway through intermission, he unfolds himself and very slowly makes his way across the stage, pausing every minute or so to gaze out over the audience or look back over his shoulder. The funny thing is that it isn’t just an interesting way to get through intermission; he looks like he is judging us, like we are the ‘weirdos’ coming here to view this, his life or his subconscious or the reality of his imagined state. He is the figment but he is the one with the right to be there.

The intermission blends into the next piece, Schmetterling, when a woman dressed in a child’s long red coat begins to tiptoe across the stage. We watch as she transitions from a fragile child to a bolder, even bratty kid sometimes breaking into song and mimicking adult movement. At the end, when we know intermission is over and we are entering into a new realm, a solo man crosses, solemnly, and when he is done the curtain opens and commences a duet between the solemn man and the woman from before, but now she has gray hair and is an old stooped woman. A lifetime has occurred, a lifetime experienced by this woman, and about which the strong young man knows little. As they dance, she seems to be laughing at him, laughing at what he does not know. From there, Schmetterling roves through a series of short dances that are mostly set to lyrical music by The Magnetic Fields. These vignettes, mostly solos and duets, appear to depict sincere individuals, couples, and trios wearing mid-century ghetto attire, who should be demonstrating strife and daily tasks but are instead mostly silly and farcical. Because the dancers are so talented and the choreography is seemingly trivial, the lyric “sometimes transcendent, and sometimes just dumb,” stood out prophetically early in the work.

Towards the end of Schmetterling, the few serious moments come to a head as the final portion of the work turns towards the transcendent. The young man and the old woman come together once again and now I am left with the impression that everything we just witnessed was her life in stories, seen in the way that she told it to this young man as he grew up, almost entirely humorous and often just plain silly. But the man is not amused, and their duet paints a clear conversation in my mind, one where he asks, “Why do you make light? You have experienced love, hatred, controversy, turmoil, exquisite happiness…and you laugh.” To that she responds, “This is it, all we have. We cannot take ourselves seriously. This is not just the impression of age, it is the extremism of humanity. You grab that forbidden fruit and you make apple pie out of it.” She makes it clear that life may have shoved her around but she grabbed it by the balls and laughed in its face. I may be too much like the young man, not unlike many of my generation, finding the travails of humanity too great to dismiss. I couldn’t quite latch on to the levity when the dancers flounced about in ghetto garb, but when the work took a somber twist, it hit like a ton of bricks, with the weight of the world.

There were motifs that appeared in both pieces such as the men and women generally wearing the same costumes, as if gender played no role, or dancers striking poses where the leg is held in the air by the arm. Even though the dance vocabulary alone did not impress me this time as it has done many times over on the dancers of NDT, I am still left with absolute conviction that NDT is one of the best dance companies right now on the world’s stages.

To find out more about NDT, visit www.ndt.nl/en.