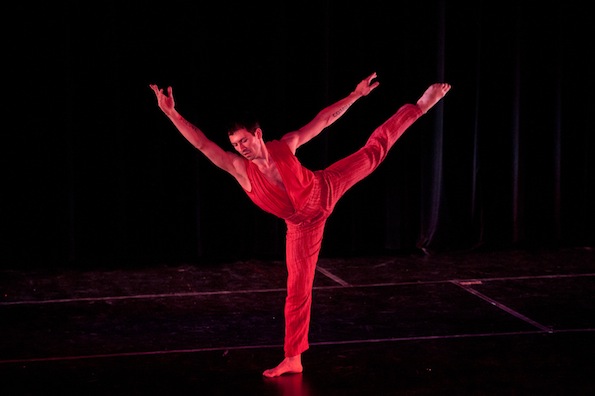 The Italian International Dance Festival, which for the first time found its way to NYC this spring, proved to be a fun evening of dance and celebration, a time to honor some Italian “greats” and a way to bridge the gap between Italian and American dance cultures.

The one-night-only performance took place in the Julia Richman Theatre, a spacious venue to hold the packed house, with audience members including Luigi, the “master of jazz”; Ben Vereen, the legendary Broadway actor, dancer and singer; and many of the evening’s participating choreographers. Antonio Pio Fini, a dancer and choreographer originally from Calabria, Italy, was impressive in his artistic directorship of the entire festival, which also included an awards reception the night before. Fini also danced in two of the evening’s pieces and served as one of the emcees.

After a bit of a delay (maybe next time assigned seating should be considered; although a nice idea, general admission seating sometimes leads to a search for seats together), the evening of dance and awards was underway. High school students from Talent Unlimited performed the opening number, a vibrant, cheerful tarantella. It was a wonderful way to begin the celebration of Italian dance and dancemakers.

A very done-up Italian woman came onstage to introduce the next work. Although an emcee was not entirely necessary when the audience had programs, her presence was friendly and casual. Michael Mao’s Kyrie, a piece dedicated to Zena Rommett, the Italian creator of Floor-Barre, was danced beautifully by Kristin Draucker and Fini. The work was set to music by Giuseppe Verdi, the Italian composer who is being celebrated this year for his 200th anniversary. Fini and Draucker were matched well together – he has a striking, crisp line, and her dancing was filled with a fluid lyricism, though internally strong. The pas de deux began with moments of high lifts and partnering until Draucker left Fini to dance alone. Then, just as the music and Fini’s dancing escalated to its fullest, she reappeared and there was some calm, a sense of release. Now, it seemed as though she was supporting him, holding his hands as he continued along a diagonal of envelopés with a collapsed upper body. The support system had been reversed, and it is she who dragged off her partner into the wings. 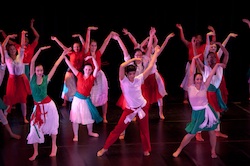 Omiya Daisuke, a 24-year-old Alto Jonio Dance Emerging Choreographer winner, performed a stunning solo. Daisuke is a luscious mover, so captivating in his body’s manipulation and control. He combined a mixture of locking-type movements, hand gestures and absolute liquid-like connectivity from one limb to the next. He seemed to glide across the stage so silently, playing with his body in space. It was the type of movement that probably looks best on the person who created it, and it looked great on Daisuke.

Luigi’s Solitude, danced by Jessica Black, was a prime example of Luigi’s genius. His movement style is simplicity, but each moment and step is so smooth and so meaningful. The footwork and arms, beautifully executed by Black, were clean and musical. A recurring back soutenu with a lingering moment of the dancer’s back to the audience before she swiveled around was breathtaking. Black danced by herself, but she didn’t seem lonely; there seemed to be some remembrance, some acknowledgement of someone else.

Next, Luigi himself was honored with A Heart for Art Lifetime Achievement Award, presented to him by Vereen, who credited Luigi for keeping himself and other dancers dancing and feeling well, with Luigi’s motto of “never stop moving”. “Before there was the ‘j’ in ‘jazz’, there was Luigi,” Vereen said.

The dancing continued with other captivating performances, including the Italian company, Alex Atzewi Dance Company, who performed La Pelle Sotto L’Abito, a piece with daring lifts and floor work that showed off the dancers’ strength and flexibility. Although perhaps a bit too long for the type of mixed-bill performance (but certainly not to be missed given an opportunity to see them), the choreography and dancers were impressive and well-rehearsed. 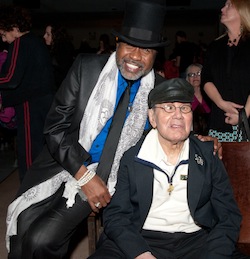 Impressive, too, was Dancing with Noa, with music by Claudio Monteverdi. Noa Guy, who suffered a major brain injury and is half-paralyzed from a car accident years ago, was “dancing” with Fini, standing against him or behind him, lifted in the air or brought to the floor. The piece was spiritual and inspiring, and Guy appeared mystical with her long, gray hair flowing. The piece was received honorably with a near standing ovation.

Staten Island Ballet performed a beautiful piece, Moment to Moment, choreographed by Ellen Tharp, the company’s director. The evening’s only classical ballet work, with music of Anna Moffo singing Sergei Rachmaninoff, was in homage to the Italian Vespers. The ballerinas appeared in long, flowing dresses, bourréeing backward onto the stage, making breeze-like circles and appearing almost ghostly as they glided across. Sometimes they were scooped up by the company men, who continued to spin them off in the recurring spiral theme. There was a pas de deux for a beautiful central couple, with a corps of expressive dancers continuing to circle through the space. Three high, slow-turning lifts of women in different shapes ended the piece as the lights faded. The choreography was well-suited to the hymn-like music.

The evening ended with another Luigi solo, New York, New York, danced by Erika Black. Again, Luigi proved himself to indeed be the “master of jazz”, and Black used her clean lines and strong musicality to accentuate his choreography. The piece was a perfect way to end the Italian International Dance Festival in NYC.

There is strong potential in Fini’s festival, and it is clear that the Italians have made and do make wonderful contributions to the dance and arts community. It will be interesting to see what he has in store for next year.