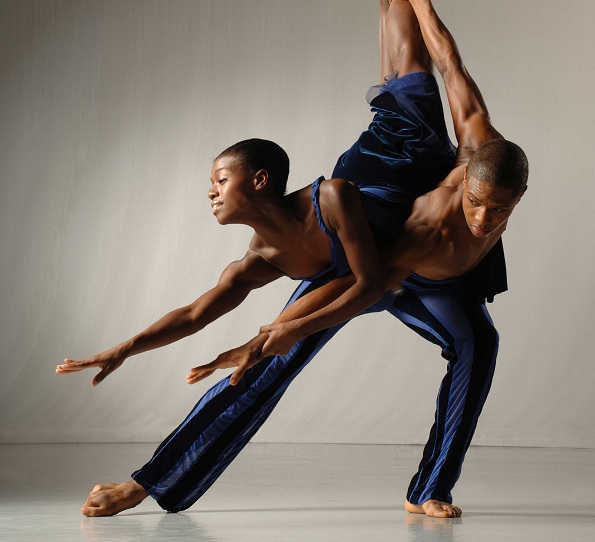 Ailey II, the second company of Alvin Ailey American Dance Theater, and one made up of some of The Ailey School’s most promising scholarship students and soon-to-be professionals, presented its annual New York season at its home theater, The Ailey Citigroup Theater. This two-week run, from March 13-24, was the first with newly appointed Artistic Director Troy Powell, a former Ailey dancer and only the second person to lead Ailey II since its inception in 1974.

The company performed two programs – one of all new works by rising choreographers and one of “Returning Favorites”, with works by Powell, former Ailey Artistic Director Judith Jamison and by Ailey himself. This performance of “Returning Favorites” proved that Ailey II has the talent to shine as a company of its own and provides another outlet for some of the Ailey company’s great works to resonate.

The first piece, The External Knot, choreographed by Powell with music by Philip Glass and Robert Schumann, seems to tell the journey of one man, danced powerfully by David Adrian Freeland, Jr., as he juggles between assimilating with the community or standing strong with his independence. The dancers are dressed in crushed blue velvet dresses for the women and jazz pants for the men. The work opens with Freeland’s back to us, as he stands against the crowd.

The dancers all look as though they’re searching for something, and recurring wave-like gestures with their arms and hands crossing back and forth reverberate through all the sections of the work, bringing the story together. At times, Freeland walks through the rest of the company as they dance. He is clearly separate from them.

The External Knot is laced with varying couples and also beautiful sections of a duet and a trio, with echoes of partnering from the first group section. We’re not entirely sure of the group’s relationship to each other, and no one seems entirely happy, until the final section, marked by a sudden change in music – from subtle, melancholic compositions to more exciting drum beats. There are again echoes of Powell’s choreography from previous sections, but now there is an entirely different feel. The group is now smiling, their movements as a whole are much more dynamic, and they are almost playful, like in a game of tag. Freeland dances opposite of the group at times, but there is something different now – he is more a part of the community but is still different, still independent, and it seems everyone is okay with that. 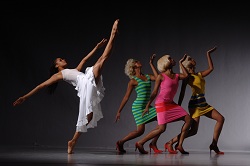 At the start of Ailey’s Quintet, we are introduced to five luscious ladies in slinky red gowns, red heels and various “bombshell” wigs. We see them first as back-up singers, as they lip synch to the soulful lyrics of Laura Nyro, but their “bootylicious” moments (pretty clever of Ailey, who created the piece in 1968) are quickly interrupted by one dancer who breaks away from the crowd, in a complete moment of internal seriousness. She then snaps out of it and rejoins. These moments trickle through the group. One by one, they break apart from the idealized beauty that exists as though they’re showgirls on display.

Quintet showcases the lovely talent of the women of Ailey II. Each has a chance to break free individually, both as characters and also as dancers. As the piece carries on, the women shed more and more – figuratively, as their movements contrast those of the original “doo-wop” group, and literally, as they toss off their shoes and wigs and dance in neutral clothing.

Quintet is refreshing and interesting in its satirical approach and as a commentary on women. It shows women and their complexities. What’s underneath the glamour and sparkly gowns are real, deep beings. The piece concludes with the five dancers back in their original costumes, but this time with the depth and layers they have just showed us.

Divining is a very strong, very musical work, and it allows the dancers to show their strengths both individually and as a group. At times, they even seem to pulse as one breath.

The “Returning Favorites” program was a diverse one, and Ailey II was an energetic, dynamic group who danced a lot and did it well. I can only say it’s a shame that part of my experience was interrupted by an audience member two seats down from me who apparently couldn’t wait through 30 minutes of dancing until the first intermission before digging into her snack with crinkly paper. These dancers are up there working hard, and they deserve the audience’s attention and respect.