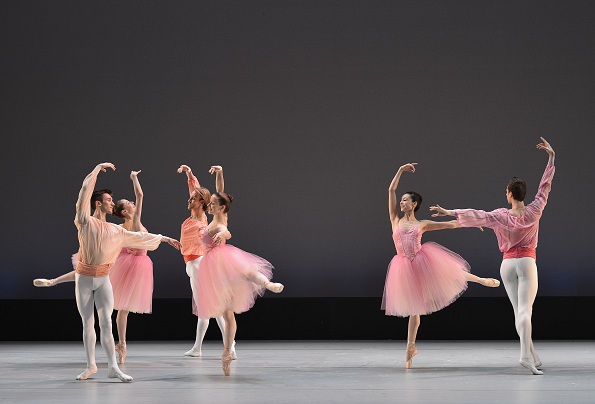 Rarely in ballet do I find the same smaller and more intimate showcases so prevalent to modern dance. The reasoning for this is, admittedly, unclear to me. Perhaps, the work in its grand tradition and even grander costumes, sets and live music harkens to the vast world provided by larger spaces. Perhaps it is the fact that pick-up companies are less common in the world of ballet as compared to the common freelance format of many modern dance companies. Perhaps it is that almighty elephant in the room: funding. Whatever the reason, anytime I am privileged to see a classical ballet company in a more intimate space, I jump at the chance.

This was the case on Wednesday, March 13 with Tom Gold Dance at the Gerald Lynch Theater in New York City. Mr. Gold’s troupe of nine dancers is a mixed bag of ballet artists, many of them currently dancing with New York City Ballet where Gold was a company member for 21 years. Noted for his straightforward style and comedic timing, his company’s New York season was a wonderful blend of ballet’s classicism, jazz’s rhythm and a touch of multimedia that worked to contemporize the evening.

The performance opened with Faure Fantasy, named for the composer of the work, Gabriel Faure. Dancer Gretchen Smith entered the stage first in a rose-pink tutu and took great care with the light, melodic music, which was played wonderfully live on piano by Susan Walters. Gold’s choreography is in its most classic sense in this piece: seven dancers traversed the stage in snappy piqués and briskly moving glissades. The bodies moved back and forth, revealing a soloist, then a pas de deux, then everyone en masse in a dizzying effect of fluffy, pink lightness. 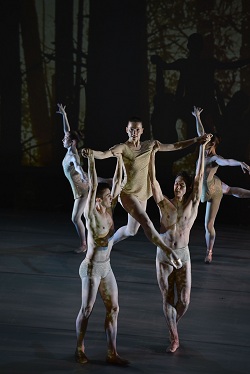 Gershwin Preludes offered a much-needed theatrical break from the action. Luciana Paris and Stephen Hanna engaged in a playful duet set to an excerpt of the Gershwin Preludes. Hanna was especially captivating right from his first playful leap on to the stage; he has a boyish charm and sincerity that was completely effective. Paris was with him every step of the way—so trusting in their partnership as she effortlessly leapt toward his arms and allowed herself to put her full weight into their promenades, maintaining lightness and a pure lack of hesitation.

The centerpiece of the evening was also the least exciting piece of the performance: the world premiere of La Plage set to music by popular avant-garde composer John Zorn and made for the entire company. The video backdrop of various natural environments (first a forest then a beach scene) was largely drowned out on the vast Gerald Lynch stage. Though the musicality was most fine-tuned in this work, the bland costumes did nothing to complement the dancers’ bodies and the finale section, which harkened to a 60s beach party, seemed entirely contrived and overdramatic.

The final piece, Mad About the Boy, closed out the evening and fittingly showcased Gold’s theatrical flair. In a ballroom scene, the dancers entered the space clad in jewel-toned ballroom gowns for the women and classic tuxedos for the men, depicting a distinctly classy affair. Sara Mearns entered in a flowing black gown and engaged in a playful duet with Gold, jauntily chasing him around the stage in her coy, sly way. Her natural grace set against his nerdy charm was both heartwarming and hilarious. However, the exciting Likolani Brown stole the show as the lonely maid of the house, so precise in her steps and ever confident in her role. It was wonderful to see her fly around the stage and not miss a beat. For being portrayed as the hired help, she was, by no means, a lesser character. Brown allowed the final piece to end on the upbeat note it needed.

I appreciate Gold’s flair for the theatrical (how wonderful is it to laugh at the ballet?!), but through it all, I did not see a distinct voice that was all his own. Gold sacrificed many small vignettes in lieu of a larger, more developed work and it all lacked the innovation I was so desperately longing to see. I look forward to future performances where Gold embraces his cinematic theatricality and leaves the rest on the cutting room floor.