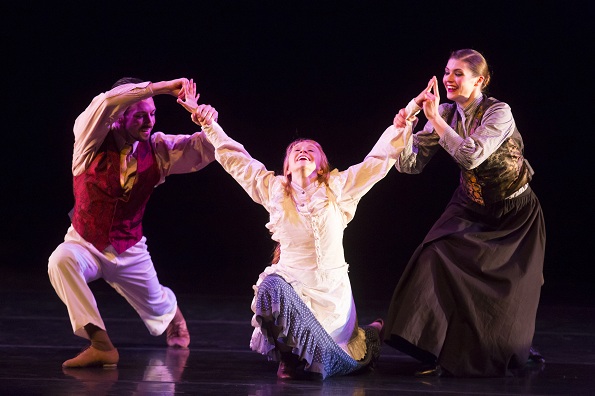 For a person who is hearing and sight disabled, his or her world often revolves completely around touch and feel, that kinetic, physical sense of being and form. For the historical heroine Helen Keller, who became deaf and blind at 19 months old, feeling and touch were everything, giving her a sense of not only her surroundings, but also the people who loved her.

The physicality of dance offers a special vehicle for portraying Helen’s story, and award-winning choreographers Ann Reinking and Melissa Thodos recently joined forces to choreograph a work celebrating it. The creation resulting from this pair’s second collaboration together is A Light in the Dark, the story of Helen Keller and Anne Sullivan, which was premiered by Thodos Dance Chicago last month and performed again March 2 and 3 at the Harris Theater for Music and Dance in Chicago. 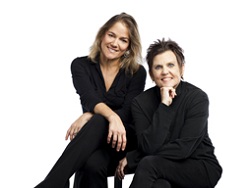 A full-length contemporary story ballet, A Light in the Dark is an ambitious, creative work telling an intimate family story about the extraordinary woman who was deaf and blind, yet went on to become a world-famous writer, political activist and inspiration to all. Co-choreographer Melissa Thodos, founder and artistic director of Thodos Dance Chicago, said the idea for the work first came about in March 2011 in response to a suggestion by dance legend Gary Chryst. The company had just finished performing The White City: Chicago’s Columbian Exposition of 1893, a Reinking and Thodos collaboration that was named “Best Dance 2011” by the Chicago Sun-Times, when Chryst recommended a dance work about Helen Keller’s inspirational story.

“When the idea of doing a story ballet on Helen Keller was first thrown out there it got kind of quiet,” Thodos remembered. “There was something very resonate about that idea.”

Reinking, a Tony Award-winning Broadway star, said the idea definitely stuck with her as well, saying, “It was a suggestion that just didn’t go away.”

Soon thereafter Thodos and Reinking decided to embark on the project, which was to be very different from their first work. To prepare they traveled to the Helen Keller National Center on Long Island in April 2012 – an education center that works with persons who are deaf and blind. 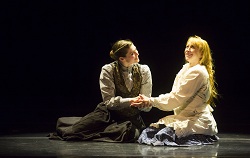 Thodos Dance Chicago’s Alissa Tollefson as Anne Sullivan and Jessica Miller Tomlinson as Helen Keller in ‘A Light in the Dark, the story of Helen Keller and Anne Sullivan’. Photo by Todd Rosenberg Photography.

“We spent the entire day there with staff members and an interpreter who had worked there for 17 years. We learned a lot kinetically about how those who are hearing and sight disabled can navigate through space, how they hold themselves,” Thodos said.

In addition to watching and observing for that physical and kinetic information, Thodos and Reinking sought to learn about Helen Keller’s life and “what she accomplished and what it stands for.” Also at the center, they got to experience what it is like to be deaf and blind.

“We were put through an exercise where we were blindfolded and given earplugs and then led through a building. We learned about those very specific places of the body that interpreters interact with. There is a code of vocabulary for interpreting when you need to speak with them,” Thodos recalled.

Reinking was also impacted by the experience. “When our guide took my arm and started directing me down the hall, I immediately felt the huge difference of moving without being able to see or hear. I could feel the difference of the floors, from linoleum to carpet to grass, and the difference between going up and down stairs and around corners. All of a sudden your movements feel bigger.”

Their visit to the center influenced the work that took shape in the studio back in Chicago. Thodos and Reinking talked to the dancers about their visit and asked them to “really think about how they would move without those elements available to them.” The dancers even learned the manual alphabet of signs, a language based on the shapes and formations of one’s hands. In many ways, sign language is a dance of the hands, involving specific movements, locations and spatial orientations.

“We really worked on the dancers thinking about the two components of sight and hearing being taken away,” Thodos said. “We asked them to think about how that would feel and how they would kinetically react to that. Out of that we also did improvisation sessions in the studio.”

In A Light in the Dark, Helen and Anne are the central characters, but the story also includes Helen’s mother (Kate), Helen’s father (Arthur), Helen’s brother (Philip), Anne’s brother (Jimmie, who died young in an asylum) and Anne’s students at a school for the blind where she taught before becoming Helen’s teacher.

Reinking shared that the story of Helen inspired her because “human miracles inspire the soul.” She said this family-friendly ballet “really portrays how necessary it is for people to work in concert to take things to the next level.”

Thodos added, “It’s a really amazing story in history that we think should be told and that people should know about.” She also acknowledged that it is about disability awareness in many ways too.

As part of the performances, the company partnered with the Chicago Lighthouse for People Who Are Blind or Visually Impaired. Specific initiatives, developed in consultation with Sandy Shinner, known in Chicago’s arts and access communities for advocating barrier-free arts for persons with disabilities, included pre-show touch tours for patrons who are blind or have low vision, printing complimentary braille and large print programs, and assembling a program to teach students through dance about living with disabilities.

Reinking perhaps expressed this important component of the show’s mission best when she said, “The more society learns about disabilities, the further we can advance, understand and progress in our ways of addressing it.”

Thodos Dance Chicago, a contemporary dance company more than 20 years old, seeks to tell American stories. A Light in the Dark is one of many performances celebrating the American voice in dance through producing American choreographers’ works.

However, Reinking said the work is something everyone can relate to. “We have all gone through this in some way, shape or form. We’ve overcome adversities.”

For more information on Thodos Dance Chicago, A Light in the Dark, the story of Helen Keller and Anne Sullivan, community engagements and initiatives, or upcoming performances, visit www.thodosdancechicago.org.