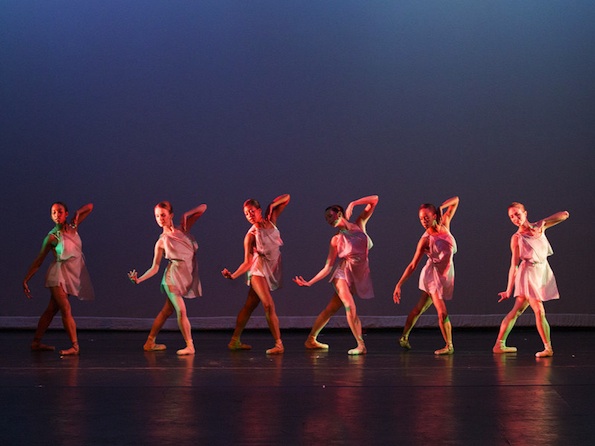 Atlanta’s Dance Canvas, a respected platform for emerging choreographers, presented its fifth anniversary showcase in mid-January. This Dance Canvas presented the work of nearly ten choreographers and debuted a half a dozen world premieres of various themes and styles, including contemporary dance, tap and ballet.

With both playful and heart-wrenching works, as well as poised and powerful, technical pieces, Dance Canvas’ show offered diverse performances with something for everyone.

Kicking off the evening was Awakening, choreographed by Tracy Vogt, a former dancer with Philadanco who presented Between the Worlds last season. In contrast with her previous work, Awakening was fierce with high-energy jumps, powerful lifts and heavy falls. Unlike last season’s affectionate duet and chorus of breathy lifts and lengthy arabesques, Awakening was focused on no specific dancer and was extremely angular, with arms slicing through the air, torsos clinched in swift turns and legs being thrust into empty space.

Yet, perhaps the most intriguing aspect of the work was not the highly demanding choreography or the momentum and focus it required, but the thematic elements it infused through a voice-over questioning humanity’s relationship with time. It asked if given the opportunity, would a person look into the past or the future, their memories or someone else’s. The dancers’ physical responses to these questions were fascinating – driving themselves hard and fast into the ground, into the air or into each other. If somewhat vague in her intentions, Vogt still succeeded in giving viewers a work to ponder once the lights went out. 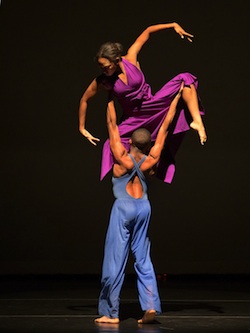 Another equally curious work was Enlightenment, choreographed by New Orleans-native Tianna Pourciau Sykes, who is currently on the faculty for Dance Canvas’ programs ARTSCool and Culture Club. The contemporary quartet, built mostly on soft arms and light movements, centered on the idea of knowledge and learning. Dancers would take turns sitting in a chair and reading a book under a lamp before springing forth with new ambition and energy. The overall concept, while universally understood, could have been challenged or deepened. It felt like the work hit a plateau and the un-succinct music mix added to a feeling of disjointedness.

One of the highlights of the night was a surprising duet between dancers Laila Howard and Tre McClendon in Worlds Apart, choreographed by tap dancer Vanessa Chisolm and hip-hop dancer Rachel Kingston. It focused on the issue of homeless in inner city Atlanta, where it is reported that on any given night there are at least 7,000 homeless people seeking shelter and support, according to the 2009 Metro Atlanta Tri-Jurisdictional Collaborative Homeless Census.

In Worlds Apart, Howard and McClendon were just that – outwardly worlds apart. Howard, representing the homeless, was outfitted in rags with her hair in shambles, while McClendon, posed as a modern businessman, was dressed in a fitted suit and nice (tap) shoes. As McClendon played and talked on his cell phone, Howard writhed in destitution as the back screen lit up with real film footage of the homeless in Atlanta. Howard expressed her hopelessness with sporadic, frustrated jumps and by flinging herself at McClendon, who would push her off before segueing into impressive tap solos. In the end, McClendon gave his jacket to her but left without so much as looking back, making a poignant statement on the upper classes’ sometimes lack of compassion in Atlanta. 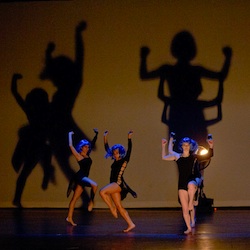 Another work that stood out from the rest was Winergy by Zachery Richardson, a Kennesaw State University student whose piece was selected through the university’s choreographic partnership with Dance Canvas. Winergy, set to club-like, electronic beats, pumped out lively, abstract movement consisting of jerky shoulder movements, subtle, humorous gestures and grounded bouncing. The seven dancers wore electric-blue wigs, which they pointedly shook, making this viewer think the piece was about the movement hair makes when put under a blow-dryer.

Angela Harris, Director of Dance Canvas, choreographed a work for the showcase. Muses of Form, presented in part by the City of Atlanta’s Office of Cultural Affairs Emerging Artist Award program, was inspired by Harris’ time at the Louvre in Paris. Set on six ballet dancers, the choreography featured statuesque poses, graceful solos and a touch of Greek elegance. Although the work was somewhat predictable, it had a lovely flow that captured the audience’s full attention.

The last notable work of the evening was (con)version, choreographed by Kassandra Taylor Newberry. Reflecting liberation from society or some lifestyle choice, dancers would sporadically stop mid-movement and take off their socks, which were symbolically representative of their alignment to the norm. Although the work was a large ensemble piece, Newberry succeeded in giving the dancers freedom to move as individuals and trios. Her movement style is a pleasure to watch as it blends undeniable technique and form with sharp, decisive steps.

If Dance Canvas’ fifth annual showcase is a testimony to what the next five years will look like, it’s safe to say Atlanta’s young and upcoming dancers are in good hands. The organization clearly recognizes great potential and talent while respecting the art form’s beautiful choreographic diversity.