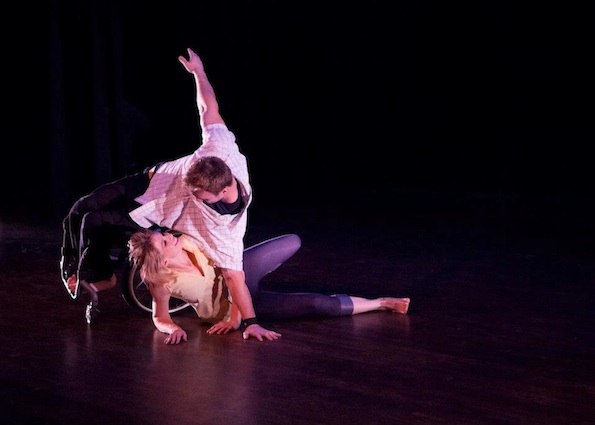 With unabashed bravery and undeniable passion, Full Radius Dance recently presented the world premieres of Artistic Director Douglas Scott’s Dames and Delinquents and Touch, as well as Lori Teague’s There is No Such Thing as Mistakes, in Atlanta’s intimate 7 Stages Theatre.

Full Radius, marketed as “a physically integrated modern dance company,” is a solid and inspiring movement ensemble made up of dancers both in and out of wheelchairs. Founded in 1995, the company is known both locally and internationally for its inclusive and forward-thinking nature. So, I guess one shouldn’t have been surprised at the emotional depth and breadth of what they presented in January – and still, even when one expects the best it is always a pleasant surprise when the expectation is met.

Full Radius’ recent concert began with Dames and Delinquents, a work Scott described pre-show as being inspired by disenfranchised teenagers caught between normalcy and rebellion during the postwar era. Set to a score of early rock-and-roll songs (pre-Elvis Presley), the work was quirky, cutesy and retrospective, using hand games and flirty duets to allude to the teenagers’ inexperience and childishness while jaunty looks and aggressive gestures signaled their misfit status and conflicting desires.

At one point, after a charming group spree, the dancers rushed to the back wall of the stage and acted as if they were being arrested, with hands on the wall and heads hung down, while spotlights were pointed at them. They slowly turned to each side as if getting their mug shots taken. This moment excellently summarized the conflicting feelings these teens had – at once they felt both numb and fully alive, frozen in a post-modern societal daze and buzzing with attitude and spunk.

The overall mood of the work succeeded in conveying the teens’ driving camaraderie, which served as both a reassurance and a point of struggle in a time when they desperately desired freedom and distinct individuality.

The second work of the evening was Lori Teague’s There is No Such Thing as Mistakes. Teague, director of Emory University’s dance program, crafted this electric and sobering work through numerous improvisational rehearsals with the dancers. She said in an opening statement that the work was meant to challenge the dancers and identify the risk-takers, while creating a collage of ideas and contemporary movement.

The work opened with the entire ensemble on stage with two of the wheelchair-based dancers on the ground without their chairs, which undoubtedly surprised viewers. As the music started and the soft stage lights lit up their frames, the dancers reached their arms forward before suddenly using one of their hands to pull the other back, almost as if they were touching something that they weren’t meant to. 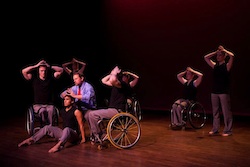 Themes of darkness, chaos and communication presented themselves through company member Marshall Hamilton’s reciting of the poem “A Ritual to Read to Each Other” by William Stafford. Hamilton, who is typically in a wheelchair, unexpectedly walked onto the stage before delivering the poem. The last stanza started saying, “For it is important that awake people be awake” before concluding that “the darkness around us is deep.” This section of the poem seemed to guide the work.

One standout moment in Teague’s work was when the dancers began to whirl, whip and fall into the ground with such force and abandon that I began to fear they may hurt each other. Dancer Samir Jusupovic would throw his arm laterally before diving his wheelchair and himself into the floor. Later, he would flip himself forward, in the process overturning his wheelchair, with aggression on the border of violence. This excellently captured an existential angst.

The ending scene was beautifully fraught with symbolism as three dancers walked slowly, intensely forward while the four dancers in wheelchairs weaved and rolled chaotically and precariously without direction through them, at times almost colliding. This was the last image as the dim lights faded out. It seemed to suggest that people can and do move through life often without awareness of one another, almost colliding into death and darkness. Stafford’s poem warned of this as well, stating: “Though we could fool each other, we should consider-lest the parade of our mutual life get lost in the dark.”

Lastly, on another note entirely, Scott’s three-part Touch premiered. This was by far the most memorable work of the evening. The topic unquestionably applied to everyone in the room, as it had to do with the science, emotion and memory of physical touch. Secondly, it was alive and teeming with heightened feelings and sentimentality.

Scott led into the work by sneakily introducing the areas of the body most sensitive to touch, including the face, neck, feet and fingers. He brought the dancers onstage in white lab coats and introduced these areas with a technical, gestural dance. Then, without warning, the work fell into a genius duet performed by new company member Shawn Evangelista and veteran Laurel Lawson.

Lawson, who is in a wheelchair, touched Shawn with a practical, scientific probing, emphasizing the areas previously pointed out. Creatively, Scott’s choreography utilized a simple metal foldout chair as a prop to separate their bodies, always keeping them disconnected and divorced while still applying pressure to each other’s limbs and body parts. One moment in particular resonated with me as Evangelista slid the open chair over his torso onto Lawson’s, which he then put his weight onto before flinging himself off.

The scientific duet turned intimate, loving and gentle after two company members came onto the stage to take away the chair and strip them of their outer garments, leaving the two naked except for a tight blue unitard. Evangelista and Lawson excelled in their curious, loving roles, exemplifying warm affection, tenderness and vulnerability. At one poignant instance, Evangelista laid across her lap in a low hinge while she stroked his face. A duet between Jusupovic and newcomer Renee Beneteau immediately following this portrayed the other emotional aspect of touch – aggression. The two, dressed in red unitards and shoulder pads, hostilely dropped, tossed and pushed one another where Evangelista and Lawson had just gently caressed and patted.

There were many superb and breathtaking moments in the final section of Touch, focusing on memory and the graceful form of dancer Julie Holcomb. She sweetly and weightlessly moved from relationship-to-relationship, beginning with an endearing and moving duet with Marshall Hamilton at the front of the stage. She is a gorgeous, lithe dancer with a generous vulnerability and heartfelt quality.

Exemplified throughout this show was the truly wonderful and unique aspect of Full Radius Dance – the company’s ability to make the viewer forget that the wheelchairs exist. When watching the dancers move and flow over and throughout the stage viewers soon forget the spinning wheels, the sudden stops and the somewhat noisy slams as the metal hits the ground.  Rather, the originally heavy and awkward-looking pieces of equipment become a part of the dancers’ bodies.

For those viewers who are not in interaction with wheelchair-bound individuals on a frequent basis, this mental evolution is delightful. This company and its director Douglas Scott are a true gift to the Atlanta community. Their bravery, innovation and creativity offer something irreplaceable to the region’s art scene.