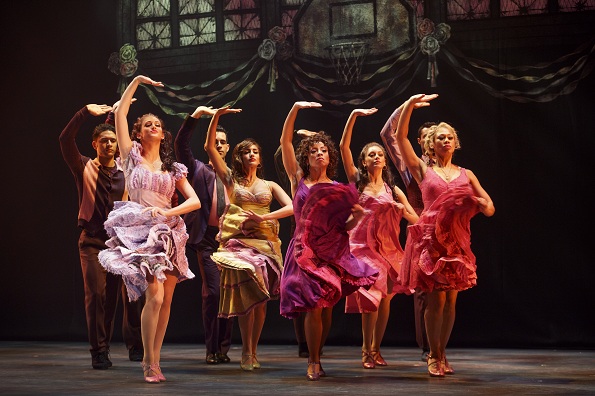 While waiting for Troika Entertainment’s West Side Story to kickoff opening night in Atlanta, attendees filled the Cobb Energy Performing Arts Centre with friendly chatter, jittery excitement and animated greetings. Perhaps it was the spirit of the holiday season creating that contagious cheer, or simply the refreshments from the beverage bar, but soon the joyful conversations were silenced by the tragedy unfolding onstage.

Known as the award-winning adaptation of the classic Shakespearean play Romeo and Juliet, Broadway musical West Side Story is a clear, romantic tragedy through and through. Presented on the eve of the unbeknownst Sandy Hook Elementary School shootings, the senseless violence carried out through the neighborhood gangs the Jets and the Sharks felt even rawer the next few days than it did that night.

A love story set in a community boiling with discrimination, societal prejudices and violence spawned by misunderstanding and hatred, the production is a thematic dousy, even for the experienced, level-minded theatergoer. Yet, even with the heavy-handed topics and tense relational dynamics, West Side Story is a beautiful, colorful, full-of-life musical.

In Troika Entertainment’s take on the original 1961 West Side Story, Director David Saint successfully revived Jerome Robbins’ choreography, Leonard Bernstein’s music and Stephen Sondheim’s lyrics. All the original passion and fervor was there, from the exaggerated facial expressions to the colorful cha-cha skirts to the seething, underlying gang rivalry.

Mary Joanna Grisso, playing Maria, was absolutely charming and delightful. From her crisp soprano singing to her innocent portrayal of Maria’s loyalties and affections to Tony, Grisso kept audience members enchanted. However, Tony, played by Addison Reid Coe, fell somewhat flat in his solo renditions of Something’s Coming and Maria. Still, his avid facial expressions and youthful glean made up for any lacking.

The company’s best piece was undoubtedly Somewhere; the sweet, utopian dream Tony and Maria have of mending the neighborhood’s conflicts and creating peaceful resolve. Characters who seemed unenthused in other scenes suddenly came to life with hopeful, bright faces and soft, balletic spins. Light steps and skips escalated to airy lifts and elongated limbs, reaching for that elusive reconciliation between the Jets and the Sharks, symbolic of the various races and genders.

The predicted high points in the production, Dance at the Gym and America, were fun frolics successfully carried out with the usual gusto and pizazz. Michelle Alves, acting as the fiery and confident Anita, was a force to reckon with in both pieces. She tossed her colorful skirts with true Puerto Rican fire and sass while simultaneously throwing her curly hair way back over her shoulder.

The West Side Story Orchestra, directed by Michael Duff, was a treat for the audience as well. Particularly, Tonight and I Feel Pretty were pleasing to the ear.

West Side Story succeeds in providing all the diverse qualities of Robbins’ choreography while concurrently telling the misfortune and tragedy that befalls the two young lovers trying to overcome hatred and division. The show, while witty, amusing and flamboyant, is also a poignant reminder of the sadness that comes when people let their pride, hurt and greed take over. It’s a reminder everyone needs and it’s a show you don’t want to miss.