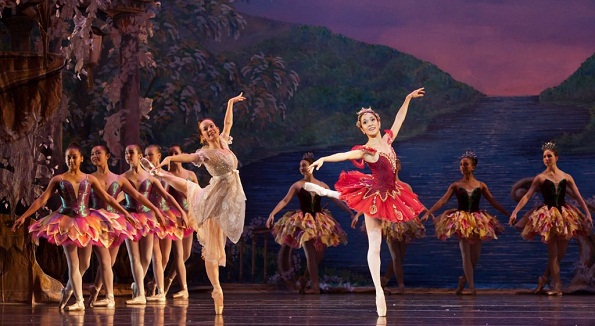 Fairytale magic is at the heart of the beloved ballet The Nutcracker. An American ballet institution, which ironically has roots in Russia, The Nutcracker is as ingrained in the nation’s holiday traditions as watching A Charlie Brown Christmas on cable, stringing lights across the tree in the family living room, and drinking hot chocolate and eggnog by the fire.

Atlanta Ballet’s Nutcracker, which kicked off its 53rd season with a red carpet premiere on Friday, December 7, took its magic spell to a new level this year by adding the expertise of master illusionist Drew Thomas, most recently a finalist on NBC’s hit reality-TV series “America’s Got Talent”. Set to the enchanting and famous Tchaikovsky score, the opening act introduced various illusions through the role of Drosselmeyer, played by 18-year Atlanta Ballet veteran John Welker.

Welker easily performed a handful of tricks that complemented The Nutcracker’s Act I party atmosphere. The first trick, a floating handkerchief that flew out over the audience and then back onto the stage, was a delicate introduction to Drosselmeyer’ mysterious stage sorcery without seeming too forced or performance conscious. Another trick, the classic “now-you-see-it-and-now-you-don’t”, introduced two Meissen Dolls (dancers Peng-Yu Chen and Jared Tan), who then performed stiff and highly-entertaining solos.

The final and perhaps most impressive trick involved the appearance and disappearance of the Nutcracker Doll (played by young Tristan Bogost). Drosselmeyer had brought young Marya (the main character who is known in other productions as “Clara”) a life size Nutcracker doll. Complete with a soldier’s uniform and red, rosy cheeks, the doll was soon broken by Marya’s destructive little brother Nicholas. Drosselmeyer took the Nutcracker Doll to a table and gestured as if to fix him, all the while hidden behind a scrim showing his shadow, seemly projected by stage lights from behind.

Suddenly, after Marya ventured behind the scrim in a last ditch effort to revitalize the Nutcracker with a kiss, the scrim was pulled back and a new, taller, older Nutcracker emerged, played by new company member Alexandre Barros. The audience almost audibly gasped as children pointed and moved closer to the edge of their seats.

Yet, even with the success of these new and well-placed magic tricks directed by Drew Thomas, Atlanta Ballet’s Nutcracker stands out the most for it’s own continually charming and beneficent magic spell – that beautiful combination of childlike innocence, gentility, romance, humor and good cheer. From the first scene of familial warmth in the Petrov family home to the formal, poised pas de deux between the Sugar Plum Fairy and Cavalier, The Nutcracker is brimming with the magical and ethereal qualities of the holiday season.

The real magic that families return to see year after year is in the battle between the bold Nutcracker and evil Rat King, the snowflakes dancing in and out of wintry evergreen tapestries, the cool, sultry movements of the Arabians, the humorous, rambunctious Trepak and the elegant pirouettes and arabesques of the Sugar Plum Fairy. As long as Atlanta Ballet remembers this, it’s Nutcracker will continue to be the holiday tradition that regional residents flock to every December.

Famous dance critic Edwin Denby commented on the meaning of The Nutcracker in 1944 when he wrote: “The Nutcracker is really a dream about Christmas…it succeeds in turning envy and pain into lovely invention and social harmony.” Perhaps it is this “lovely invention” and “harmony” patrons readily flock to see.

Alessa Rogers, dancing the role of Marya, was a pleasure to watch as she performed the footwork and childish facial expressions with gusto and zeal. At once delicate and graceful, Rogers also brought a bold, fresh enthusiasm to her roles that was lacking in others, such as Abigail Tan-Gamino as she danced Dew Drop.