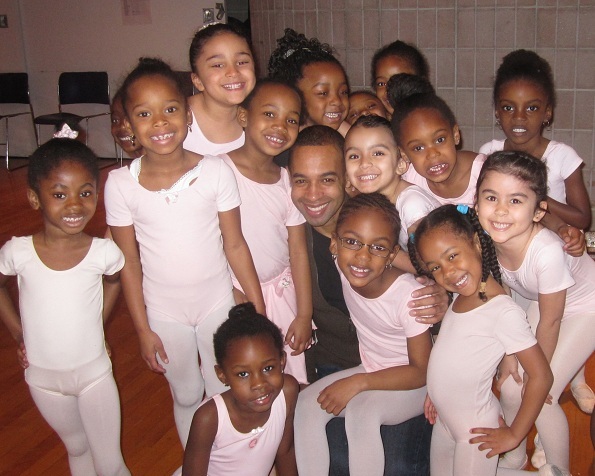 Aubrey Lynch, former Alvin Ailey American Dance Theater dancer and original cast member of the Tony Award-winning Broadway musical, Disney’s The Lion King, has a new role as Director of the Dance Program and Director of the Musical Theater Initiative at Harlem School of the Arts.  Harlem School of the Arts (HSA) is a 47 year old institution started by the American soprano, concert signer, Dorothy Maynor. HAS provides both recreational and conservatory-quality arts education in four disciplines (music, dance, theater and visual arts) for children aged 2-17.

Dance Informa spoke with Aubrey to learn more about the Dance Program and the Musical Theater Initiative at Harlem School of the Arts.

How do your former experiences as an AAADT company member and cast member of Disney’s ‘The Lion King’ inform your approach to teaching?

I have a real sense of what the industry is looking for.  When I design, teach, and coach about how to stand or hold a particular note, I’m speaking from the point of view of having been behind the table hiring people.  I’ve auditioned thousands of dancers, singers, and actors around the world and I get a sense of what the people in the room (who are actually going to be hiring you) are looking for.  When I’m teaching a child, I’m thinking ‘if this kid learns ballet, tap and jazz now, it’s going to make them really amazing at 15 or 16 years old and a real triple threat in their 20s’.

What’s new about the HSA Dance Program now that you are Director?

HSA had become a place of recreation and recreation was kind of the goal.  What I’ve brought to the table is a more conservatory feel.  I think it’s important to keep a recreational feel and to make music, dance, theater, and visual arts available to the community, but I believe that if you’re going to call it ballet, it should be ballet – the same ballet they teach at Alvin Ailey American Dance Theater, Dance Theater of Harlem or the School of the American Ballet. If you’re going to learn real modern dance, you need to learn the kind of modern dance that you’ll find in world-class modern companies.  So I’ve brought in teachers who teach the highest form of this dance and the highest form of a musical theater class.  When a child comes in, they’re learning the real thing.  Kids spot their passion very young sometimes. You’ve gotta’ get them while they are young.  I do believe that if we’re going to give our children  real opportunity to make an impact on the world, of any kind, they should be exposed to the real thing in every kind of area.

Aubrey Lynch with dance students of Harlem School of the Arts

What is the structure for the HSA dance programs and what performance opportunities are built into the curriculum?

HSA is an after-school program that serves the tri-state area.  During the school year students generally attend classes from 4-8pm on weekdays and 9am-8pm on weekends.  Children are typically at HSA from 9am-6:30pm during the summer time.

Contributing to Harlem’s rebirth is part of HSA’s mission.  How do the Dance Program and Musical Theater Initiative support this goal?

Kids can be anything and I think we really underestimate them.  I think Harlem has always been a place where poetry, music, dance, and theater have been born and I think our children have gotten distracted because of the internet, LA and other exciting venues. We’ve really lost a core of American Art – and that’s Harlem.  I come across these kids and they don’t have any experience but they sing because they come from churches, or they can dance because they’ve been watching television dance shows and imitating movements, or they are really good at memorizing lines and having an active imagination.  I’ve taken a lot of these kids and given them an opportunity to express themselves through art.  One of my students just booked the role of ‘Simba’ in The Lion King on Broadway and two of my students are doing a play this summer.  These are kids who one year ago, were just kids.

I see this position as an opportunity to put Harlem back on the map for art.  This school can be the hub for kids all over New York and we send them from there to all over the place.  It’s full of talent, it just needs people who can spot it, coach, and point it in the right direction.  That’s what I do.

How do the HSA Dance Program and Musical Theater Initiative serve children who may not go on to become professional artists?

Kids who are exposed to art at a young age do better in school and are much more effective in life.  I’ve seen it and it happens quickly, not just over 20, 30 or 40 years, it happens over a semester.  You bring a kid and put them in a dance class, voice class, or an art class and they’re different.  They are around kids like them, they feel more confident, and they have a better personal disposition because they are more confident.  I love showing kids and adults that ‘I see you’.  When kids feel seen, they feel powerful and important.  It’s not just the art itself, you have to keep people around them that can actually guide them toward their full potential.

The goal for me isn’t to send people out to become professional artists.  I’d be honored to think that one day a child who came across my path is now a professional actor or singer because they met me at the school.  That would be amazing, of course.  But, it really is about empowering kids to feel confident to want to learn more, to want to be more open with each other, interested in other art forms and be arts advocates when they get older.  And, the whole thing about bullying, some of these kids are getting bullied at school and go back to school and are confident.  There are kids who a year ago didn’t want to talk who are now singing!  There are kids who were afraid to dance, now they are wearing tights, leaping, jumping, and choreographing.  This does not mean that any of them will ever become dancers, singers or performers.  But they are clearly already transformed forever having experienced art and that’s the greatest gift you could give anyone.  And, their parents are transformed, too.  We’re helping raise their children.  What art does is show where we are all the same, it breaks down barriers and shows us instantly what we have in common.

We have kids from Vietnam, kids from Brooklyn, kids from the Bronx, and kids from Harlem all in the same dance studio who would not be together unless they were brought together by art.  What a great way to have children grow up!

To learn more about the program or to enroll visit: http://hsanyc.org