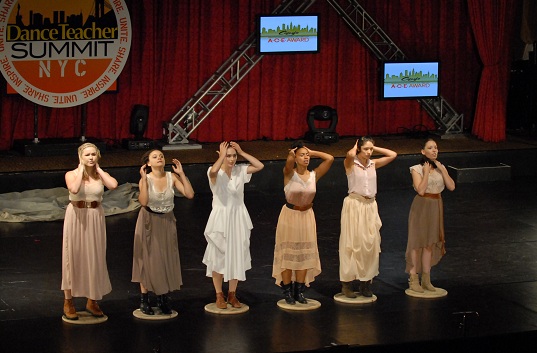 The sixth annual Capezio A.C.E. Awards took place at the Hilton New York on July 28, 2012. Fifteen lucky choreographers from across the United States were chosen after a long admission process that involved each dance maker submitting a video of their work online for votes. After months of gathering votes, these choreographers and their dancers put their long hours of relentless rehearsal to the test by hitting the A.C.E. Awards stage. Not only would they perform in front of an audience of thousands, but in front of the most respected figures in the dance industry. This year’s judges were choreographers Mia Michaels, Ray Leeper, Benoit Swan Pouffer (Artistic Director of the Cedar Lake Contemporary Ballet), Troy Powell (Director of Ailey II); Christopher Freer of Clear Talent Group; Kate Lydon of Dance Media; and Michael Terlizzi of Capezio.

The competition opened with the languid, strong movement vocabulary of Calen Kurka in his piece, Recognition. The six strong female performers, clad in navy leggings (with socks to match) and neutral gray tank tops, slid and twisted across the space in a stripped down, bare bones showing of nonstop movement. Smooth, sweeping passes across the space were punctuated by sky-high extensions and deep lunges. Kurka’s piece was a welcome opener for the entire competition.

Liz Schmidt brought her work Dust Bowl to the stage next. A studio owner from Chesterfield, Michigan, Schmidt also received this year’s Dance Teacher Award for Studios/Private Conservatories. Her young students showed a beautiful maturity in their dancing. An emotionally stirring piece, the dancers worked in chorus against a main male figure. Gestural movement met large jumps and boundless bolts across the space. What was most engaging was the genuine performance quality of these dancers, who were noticeably younger than most in the competition. Their commitment to this dramatic, dejected, at times violent, character was admirable. 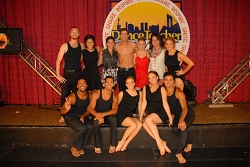 Andrew Winghart’s fiery troupe of females brought I’m Back and I Want What Is Mine to the stage. If the title is not enough of an indicator, this group of strong, vengeful women took the stage at full force. His brand of hip-hop inspired moves melded with contemporary lines and partnering created a piece that was as sassy as it was engaging. Winghart has a taste for the subtlety of hip hop movement and it was brought out by dissecting pops and locks and, even more, deliberately making movement that usually has an in-your-face punch transform into a toned down beauty.

Terminal Soul by Bree Hafen was purely angelic from start to finish. A main soloist took the space, harnessed by a large white fabric. A push and pull took place and she weaved in and out of this all-encompassing force embodied in the drapery. A trio of young ladies, in navy dresses, became the Greek chorus for this goddess as she went on a clear journey from emotional betrayal into solace. The piece stood out not only for the thoughtful use of this gorgeous prop but also for the technical purity of the dancers.

Alex Little (one of our fellow Dance Informa writers!) brought some L.A. star quality to this New York audience in Remembering Back. Little’s piece was the only work of the night to use video as a backdrop. The beautiful black and white scenarios illustrated a male and female couple in various stages of their relationship—fighting, consoling, and loving each other. Simultaneously, the ensemble cast of dancers mimicked and recreated what was portrayed in the video. It was a beautiful rush of leg extensions and buoyant partnering work that used the accompanying film in a way that made Little’s choreography an experience rather than just a series of dance steps.

KC Costellano’s Detesolc was a pulsating series of various scenarios reflecting a male figure in search of his sexual identity. The music constantly jumped back to accelerate forward and the dancers responded. As if hitting the rewind button on your remote control, these movers created these stories with genuine abandon and clear dramatic themes. Not to mention, they were all incredibly committed, hard-hitting performers.

This.Could.Save.Me. by Marinda Davis had one of the largest casts of the evening, which made for a completely electric performance. Similar to the melding of pure gestural language and intense physical movement in Liz Schmidt’s work, Davis used this combination of qualities to maintain a consistent and clear high energy throughout the work. I saw the most individuality among performers in this piece. Each dancer brought their own style to the movement and it was evident this variation was something Davis encouraged.

Speed dating meets cha cha, meets outrageous performers; this was the showy appeal of Marcos Santana’s Speed Date Mambo. And, it was just that – a mambo that showed a speed dating setup. The high energy, ballroom-esque romp was incredibly rhythmic and constantly entertaining. Easily a crowd favorite, a standout moment was when the suave, “macho man” character beat the flirty vixen’s butt like a drum. Though not the most innovative piece of the night, it was definitely the most amusing.

Will Loftis brought us mysterious, Avatar-like creatures in We Are But One. It was a very serene, lyrical piece with an army of gorgeous women with sprawling long hair and nude, flowing costumes. Loftis’ work stood out most for his musicality and thrashing, yet juicy movement sensibility. The women operated in a sort of amoeba, staying contained mostly in the center of the stage and acting as the otherworldly pact they were meant to be.

Eryn Waltman’s In Flux was the most technically pure work of the night and definitely one of my personal favorites because of that. The women in plum biketards and the men in all black personified the cleanliness of line and clarity of focus that most dancers strive for. The effortless movement (especially the partnering) worked within a contemporary ballet vocabulary. The dancers were grounded and still managed to stay sleek with Waltman’s virtuosic choreography. I felt she especially stood out for her floor work, which was able to bolt the dancers across the space with slides and lunges that still remained connected to the precision of the work.

Hani Abaza brought us into a considerably more fantastical world with Expound Fairytale. Long, billowing dresses in fire engine red and periwinkle blue fluttered across the stage as the dancers moved in a nymph-like fashion. Abaza revealed a narrative rooted in familiar fairytales; there was a princely figure with a princess, a fairy, and many creatures echoing this action in a chorus. I felt the work was a friendly play on old story ballets, like Giselle and Sleeping Beauty, where these poetic characters come to life and lead us through their majestic world. 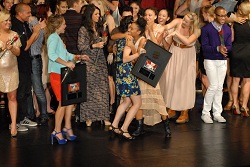 Melinda Sullivan’s Gone was certainly one of the most innovative pieces of the night. The five women in the work, one of which was Sullivan, illuminated a robust, hoofing brand of tap. I was happy to see that Sullivan made the choice to put the women in combat boots instead of conventional tap shoes, as I felt the metal sound would have interfered with the integrity of the work. Clad in an array of beiges and pinks, they all donned long, flowing skirts that they could lift up and reveal their heavy hitting feet underneath. Stomping and stirring up the space, they were relentless in their rhythmic energy. The five women were a unit; every step or swipe of the feet was never done to upstage another, whether they were working in unison or not, but to compliment what the other was doing. And, what they were doing was some extreme hoofing that kept me engaged from beginning to end.

Incandescent Paths from Jeremy McQueen saw highflying, aerobically exhausting dancing from a flurry of movers in metallic gold and silver. From beginning to end, the piece never lost its steam and that was due, in large part, to McQueen’s kinetic choreography. Even more exciting was the performers’ response to this pure modern movement. When a change of level or direction would throw a hiccup into any conventional performance, McQueen’s dancers kept it moving full speed ahead. With a movement quality recalling the classicism of Lester Horton’s structured technique and Alvin Ailey’s impossible extensions, McQueen brought a well-crafted piece to the competition.

Lauren Adams did not make a dance for the A.C.E. Awards; she made a fully dramatic experience. In Song For A Lover Long Ago the dancers were strewn about the stage, as if they had taken some hallucinogenic drug and woke up five years later, wearing the same sweat pants and hooded jackets they had previously. As things unfolded, the audience experienced the dance right along with the performers. It was clear they wanted to remain in their own, isolated worlds. When the dancers’ convulsive movement would lead them to come into contact with another, they would fold up or retaliate in a violent manner. Seizure-like shaking and relentless stomping characterized the clear frustration and denial in the performers. The piece was easily the most emotionally believable of the night and one that seemed to be able to go on for hours if permitted to do so.

The final piece of the night was a fast and furious work from Dana Foglia titled Ribbons. It was pleasing to see a group of women so uniform in their movement and character. Part robot, part alien, the women weaved in and out of Foglia’s choreography with a sense of cool that was near untouchable. In black and white striped biketards with sleek hoods to match, Foglia’s dissected hip-hop paired with contemporary movement to create an army of separate beings moving as one. Every tick, pop, lock, and slide was done uniformly and that group energy made the work all the more striking.

A marathon night of dance, the 2012 Capezio A.C.E. Awards brought together a diverse and talented cast of choreographers and dancers. In the end, any choreographer could have walked away with the top prize of $15,000 to produce his or her own show in New York City, but there could only be one winner. This year, that honor went to Melinda Sullivan, with Dana Foglia earning first runner up (receiving a prize of $5,000) and Bree Hafen as second runner up (receiving a prize of $3,000).