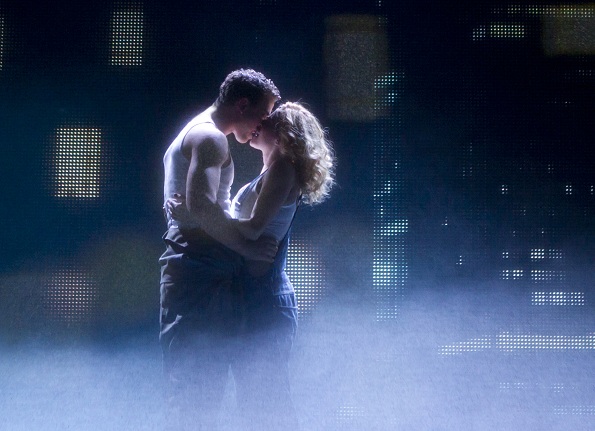 You may ask, how can the Patrick Swayze and Demi Moore 80s classic film Ghost be adapted into a singing and dancing stage show? I, too, was a skeptic, hoping that the show wasn’t going to be a corny rendition of the much loved story, as I took my seat in the gorgeous Lunt-Fontanne Theatre on 46th Street, New York.

From skeptic to fan I was hooked from the very first seconds.  Ghost the Musical is a must see for any theater lover, or for anyone really. It is gripping, romantic, heart-wrenching, hilarious and thoroughly entertaining. At times I was holding back tears, clenching the arms of my seat, laughing out loud or tapping my toes. The story takes you on an emotional journey that feels real and relatable. 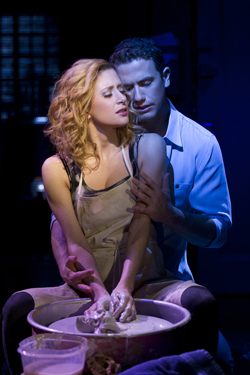 Caissie Levy and Richard Fleeshman as Molly and Sam

The cast is outstanding. Caissie Levy and Richard Fleeshman as lovers Molly and Sam were believable with undeniable chemistry. Both with impressive stage credits to date, the couple were the original main characters of the London West End production of Ghost.  As a preview showing, I expected to see actors still warming to their roles, but these two were obviously very comfortable with their characters and each other, and they shone.  They have impressive vocal and acting abilities.

However, if you go by the audience reaction, Da’Vine Joy Randolph playing Oda Mae Brown, was the star.  She was hilarious! Every time she came on stage the audience would erupt in laughter in no time. She is a true entertainer and seemed made for the role of the quirky, outspoken and brash Oda Mae. In her Broadway debut, with basically only a college theater degree to her name, Randolph is one to watch. It was exciting to see a new young star take her place on the stage.  She must be thrilled to be receiving standing ovations in her first Broadway role.

The musical is full of special effects using projections on large screens. The subway train scene is powerful and exciting. The scenes where Sam, as a ghost, moves through doors or objects are clever. There are many effects used to portray the ghosts and to show spirits taken to heaven or hell. These are chilling! With so many special effects the show could easily feel overdone, but it isn’t. Every effect is well incorporated, has a purpose and adds to the story.

Da’Vine Joy Randolph as Oda Mae Brown with the dancers

The musical is full of dancing and singing, as you’d expect from a musical, but not so much from the story of Ghost. Every song and dance number fits well into the story and is well written or choreographed to fit with the theme and build the story. My favorite song and dance scene was performed by Randolph as Oda Mae Brown when she thinks that Sam has just given her 10 million dollars. She sings and dances up a storm on top of suitcases with the dancers showing their prowess around her in sparkling suit jackets and sunglasses. It’s highly entertaining and was performed with energy and cheek.

I hope that Ghost the Musical has a long Broadway run, and even tours the country with Broadway Across America. It is an honest and captivating musical.