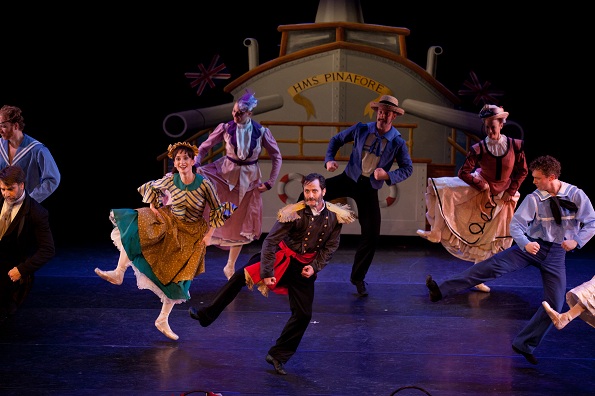 Through the pinnacle of ballet’s neo-classism era and amidst the frenzy of contemporary dance, Francis Patrelle remained true to what he loves and does best … dramatic ballet. Over 20 years ago, he found a home for his vision in the Upper East Side neighborhood of Manhattan and formed Dances Patrelle (DP). Now, the company continues to establish its own niche in a competitive dance community by using classical steps and human emotions to create theatrical productions.

After training at the Julliard School, Patrelle began his career with the Albany Berkshire Ballet (ABB). Initially, he signed on as resident choreographer, but was persuaded to dance as well and ended up performing with the company for about 8 years. ABB exposed him to a lot of historical work – something he is very grateful for. 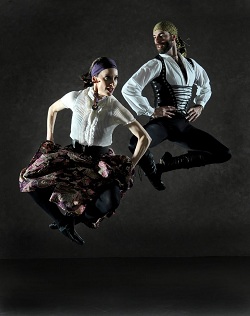 During his time with ABB, Patrelle was invited by the Julliard School to create a ballet. He titled it Reeked with Class and it was a huge success with audiences and critics. Clive Barnes even said it should be entered into the repertoire of the Joffrey Ballet, which was still in NYC at the time. However, the Joffrey never called. And despite the hype, Patrelle had a hard time getting any big ballet companies to acknowledge his work. “They weren’t interested in what I was doing. My pedigree wasn’t what everybody else’s was. I [didn’t] come from a major company. It was a different curve from what normal choreographers take,” he explained.

This prompted the idea for a small company in Manhattan. Around 1988, Patrelle met with private donors and arts administrators to determine the financial possibilities of starting his own artistic entity. It took about a year to gain a non-profit status and turn the concept into an actualization, but New York was about to witness the birth of a different type of dance company. Since then, Patrelle has created over a 100 ballets, proclaiming some of his favorites to be Judy Garland: Come Rain Come Shine, Macbeth, and The Yorkville Nutcracker – which celebrated its 16th anniversary this past December.

From the classroom, to rehearsal, to performances, fun seems to be infused in everything Patrelle does. Administrative Director and Company Dancer Justin Allen calls Patrelle “a dancer’s choreographer,” which is why some of the world’s finest flock to work with him. He creates a work environment in which dancers feel safe to be themselves and make a joke or two. Alex Brady, who has been working with Patrelle for six years, agrees with Allen’s sentiments and says the dancers of DP “work very hard, but have a lot of fun too.” After dancing with the Joffrey, Miami City Ballet, and Twyla Tharp, Brady is drawn to DP’s sense of community and proclivity to keeping the work atmosphere light. Egos are left at the door and the focus is on making good art.

The idea for Gilbert and Sullivan “gestated for years”, says Patrelle. Dr. Paul Horan, a former accompanist at Ballet Academy East, put the music on Patrelle’s radar. Then, serendipitously, Patrelle continued to run into various Gilbert and Sullivan tunes until he realized the potential for a ballet.

“The storylines are fairly complicated, to say the least, ridiculous, to say the least, and fabulous. And how the [heck] do you make the brilliant words into dance?” He went to Justin Allen, who is also an accomplished novelist, and asked him to write a ballet that would meld the duo’s most famous operettas: The Mikado, Pirates of the Penzance, and the H.M.S Pinafore. 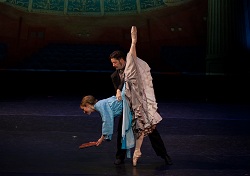 Duke Mitchell as Arthur Sullivan and Dorothy O'Shea Overbey in the prologue of 'Pinafore'. Photo by Rosalie O'Connor

Previously, Allen wrote the script for Patrelle’s ballet Murder at the Masque: The Casebook of Edgar Allen Poe. But this concept presented new challenges. Allen thought Patrelle was “nuts” and worried the convoluted storylines would blend to make “a mishmash of indecipherable nonsense.”

After much analyzing of the stories and lyrics, Allen came up with a solution. Rather than telling the tale of the characters, why not portray the stories of the actors, managers, and Gilbert and Sullivan themselves as they attempt to put their beloved operas on the stage? Thus, Allen created “a series of spiraling stories that touch each other at many points.” With the script finished, it was time to bring in the music director, musicians, and the dancers.

These many components make for an evening of live music, live dance, and, of course, lots of fun. As the company prepares to embark on the production again this spring, Patrelle plans to do some tweaking, but promises the element of light-hearted entertainment will remain.

Down the Road: The Future of Dances Patrelle

When asked about a ‘wish list’, Patrelle replied, “I don’t even wish [for] things I know we can never afford.” In light of keeping his artistic goals realistic, he does have a few obtainable aspirations. In the not too distant future, he’d love to bring back his ballets Macbeth and Romeo and Juliet to create an all-dance Shakespeare Festival. Additionally, he’d like to see his ballet POP (a full-length ballet following 3 different couples on 3 different New Year’s Eves) run the week of Christmas to New Year with a special NYE champagne-induced event. However, Patrelle did confess that his “real dream is to have a summer residency in a non-distracting fashion … to create a ballet with dancers that I love, and have some time to play.”

Patrelle looks towards the future, but he’s also grateful for the company’s rich past, generous contributors, and Julie Dubno, Director of Ballet Academy East, who graciously provided studio space for DP since its inception. What exactly the future holds for DP is uncertain, but one can hope that this chamber ballet company will continue to provide New Yorkers with stunning and entertaining productions for a long time.

Catch Dances Patrelle in Gilbert and Sullivan the Ballet at the Dicapo Opera House, 184 East 76th St, New York, NY. May 3 – 6. There will also be an additional performance in Montauk Music Festival on May 12th